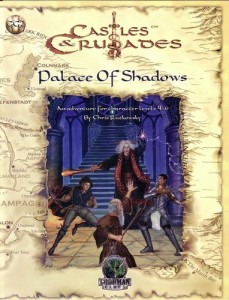 The Prince has hired you to find his father, gone these past twenty years, his soul trapped in a gem atop a tower. You must venture across a vast swamp, find your way into the tower, and retrieve the gem from the Palace of Shadows. But a twisted menagerie of fell beasts and foul magics await you inside….

This is a longish fun-house type adventure in a wizards tower. You adventure through demi-plane room/areas until you collect the five keys and can then enter the tower proper. There’s a decent mix of puzzle, trap, and creature encounters with no everything being hostile. It’s one of the better fun-house/fetch-quest style adventures that contains little to no silliness.

There is some kind of weirdly long backstory to the adventure. There’s a king, evil wizard, pretty pretty princess, brother princes, a wizards curse of darkness, civil wars and captured kings. What is absolutely astounding to me is that it’s relevant to the adventure. You could totally work this backstory in your campaign at low-level play, reveal it to the players little by little as the drama unfolds, maybe have the hard-working groom-now-king become a patron, and then spring a little surprise on the party when the evil prince in hiding summons them to do a job for him.You’d have an excellent opportunity for follow-up play also, as the patron switches to the prince and hooks aplenty pop out of the woodwork. In short: Evil wizard wants to marry princess, king says no, wizards curses kingdom to have no sun, wizard captures king, princes rules kingdom, princes engage in civil war. good wizard shows up and saves the day and marries princess, wizard manages to remove darkness curse, princess runs away to traitorous prince brother, brother hires party to go get old king from wizards tower. That’s good stuff: no epic in scope but realistic and approachable and would be very cool if the group watched the events as they unfolded during their rise from levels one to six, maybe with some of the actors mixing with the characters from time to time. Making the princess kindly and the prince a snively little shit should add to the fun also. Anyway, you get some good opportunities for a The Long Game and for introducing an evil wizard as a major villain for the game.

The adventure proper is a tough one. There are 43 or so encounters and the adventure kicks off with a 12HD dragon. This thing is pretty relentless in throwing enemies at the party and it’s not real clear to me that retreat and rest are options that are available. The adventure probably could have use a little more guidance in that area. The thing isn’t necessarily linear so it’s not like the party will be facing all 44 encounters, but the setup doesn’t necessarily lend itself to a repeated forays mindset. It’s also not the case that everyone is an enemy. Some encounters are with neutral or friendly creatures and some of the ones with evil creatures don’t have to result in combat … maybe. There is certainly a decent amount of variety. That mostly stems from the demi-plane nature of the adventure There are five extra-dimensional spaces to explore with a key to win/discover in each. Only by getting them all do you get to enter the tower proper and then go find the king. Don’t worry friends: the required Garden and Water levels are here! The “levels” proper have a decent number and variety of encounter available and many of them are quite clever without being gimmicky. One that comes to mind is a maze in the garden. There’s a terrible stink … coming from a dead minotaur with a glowing red battleaxe stuck in his forehead. I shan’t ruin the rest but there are other fun little things like this scattered throughout the adventure. Three IS a decent amount of combat … a more than decent amount. There are a lot of “they attack immediately encounters and a lot of words to the effect of “they automatically surprise the party” in many of the encounters. The magic items are generally top notch though! Glass slippers, a spinning wheel, a picnic basket … that axe of human detection (DUH! That’s why its glowing red when the group finds it!) There’s a decent amount of ‘normal’ magic items as well … I wish the designer had kept up the unique stuff.

I’m not sure what to call an adventure like this; I’m using the words “fun house.” It’s longer than those, and more involved and generally better and more ‘realistic’ than I think of with funhouses. But there is still the “i hid the keys” nonsense and the wizard building a gauntlet stuff … maybe that’s it … a gauntlet/challenge. It’s a decent one. If I were looking for a gauntlet I would turn to this one.