GC2 – They Lurk Below 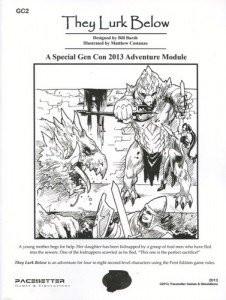 A young mother begs for help. Her daughter has been kidnapped by a group of foul men who have fled into the sewers. One of the kidnappers scowled as he fled, “This one is the perfect sacrifice!”

This is an adventure through an old Trog temple to rescue a kidnapped little girl. It mentions sewers a lot but that’s not really a part of the adventure. The basic premise is not bad but the entire thing needs more evocative text and flavor to bring it to life.

I think I must have a soft spot for rescuing kids. The adventure starts with the party witnessing the kidnapping of a little girl. I really, really don’t like ‘be a HERO’ adventures, but this sort of hook strikes me as being different for some reason. In both this adventure and Johnny Rook Watchtower on the Hill adventure, which I also liked, there are children that go missing and the party is involved in a hasty rescue. In Watchtower the party is drinking when someone bursts in to the bar to tell everyone about little Timmy falling in to the well. In this one The party is drinking when they hear the screams of the girls mother as the kidnapping is going down and perhaps hear one of the kidnappers say something about human sacrifice. Both of these scenarios seem much more natural, realistic, and more accessible than Saving the World or Saving our Village sorts of hero adventures. There’s a time element and an immediacy that I think bring this hook home. It also plays a bit with the whole mob mentality. The party is frequently on the other end of it but in these two adventures they get to BE the mob and I think that in the back of the players mind that kind of civic responsibility play out. Subconsciously they are in a position to do something NOW. This is the kind of element I love seeing incorporated in to play; elements that the players can immediately relate to on an almost subconscious level because they are integrated in to their upbringing or cultural heritage.

Next comes the part I feel could be better: the actual adventure. The adventure starts in a chase through the sewers but that’s not really important. It’s short and the sewers don’t really impact the game much other than there being an encounter with sewer crocs. The adventure immediately transitions to exploring an old trog temple. This is where things get interesting. Wait, did I say interesting? I meant ‘Generic’. This is where things get generic. This is a trog temple from the ancient past. It should FEEL like a trog temple temple from the ancient past, This sort of evocative description style is not easy but I think it’s absolutely critical to a my definition of a successful product. I’m looking for something to spark me and to fire my imagination. Something that quickly communicates the flavor of an area to me and inspires so I can then pass that off to the players. I want it terse and I want it evocative. I’m drawing comparisons in my mind between this adventure and David Bowman’s/Sham’s Spawning Grounds of the Crab-Men in issue #3 of Fight On! magazine. That adventure delivers on an environment that FEELS like it’s a crab-god place. The descriptions are terse and they communicate the feel of the rooms in a very visceral way. This adventure in contrast feels like a bunch of empty rooms with maybe a trog statue in a couple of them. The trog god is not even named. ‘The trog gods name is carved at the base of the statue’ or ‘saying the name of the trog god bypasses the room traps.’ Well, what’s the trog gods name? What sort of alien ancient subhuman trog stuff is present? Some trogs have come out stasis in this adventure. I don’t like stasis in general, but lets run with that. Instead of generic trog descriptions they could have been enhanced by making them emaciated or weakened, since they were trapped in the temple a long time before being put in to stasis. These little trow-away details are important to built up a bigger picture collectively of an interesting environment. Another example may be the temple condition proper. This is supposed to be the ruins of an ancient city that collapsed and now a newer city has been built on top of it. But not much of that at all, if any, comes through in the rooms or the environment. I’m reminded of that great ruined city in DL1 and how the map even helped communicate the environment you were in. I want THAT, not just another generic, and long, room description.

This is available on DriveThru, as a part of a bundle.

1 Response to GC2 – They Lurk Below