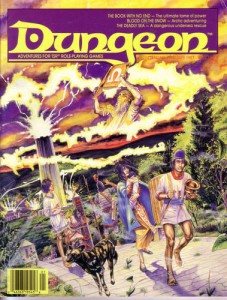 Hey! I found issue #3 tucked inside a different issues cover! Yeah me! I think this is a pretty strong issue, overall. Many of the adventures seem to tie in to the Wilderness Survival Guide through the use of bullshit environmental rules for desert, sea, and snow. The last adventure is amusing to me because of its clear illustration of the Asshole DM problem. Players are’nt the only ones who try to win D&D!

I got a joke!
Baby seal runs in to a club!

This is the adventure that several others in the OSR wish they were. It’s a fairly ‘realistic’ exploration of a small bandit fortress thought to be abandoned and rumored to have an undiscovered treasure horde in it. It’s been occupied by a new group of bandits, does have a treasure horde in it, and while small is fairly well done. It feels more like a tactical assault on a real place. Here’s the keep, here’s the patrols, here’s the watches, and here’s an obvious hole in the bad guys plan. It ALMOST keeps to that formula but doesn’t beat the thing to death (unlike the points I make in reviews.) There are several good uses of elevation in the adventure: the keep is n a hill, entry is up a cleared slope with boulders on the top, there’s a cave system with a portion you have to “boost up” to access the rest, and a parapet with guards patrolling. The ‘hidden’ part of the fortress, with the old treasure, has a good reason for being hidden AND for the presence of other dead adventurers. It does all of this with a scarcity of words (for this era anyway) and without droning on and on. The mundane treasure is well described and interesting and there’s enough loot/coinage to make it seem like someone for once actually read the XP tables & level charts in the PHB. The wilderness component is small but compliments the main adventure, with the group maybe stumbling upon a patrol of bandits they can pump for information. There’s also a ‘consequences’ section where it points out some of the bandits/etc are not in the fortress and will arrive back in a few days time. This is a pretty good ‘gritty’ adventure. I tend to like my D&D a little more weird but Sp’pc Ops’ D&D can be fun also. With some more personalized magic items I’d say this would rate VERY highly in my book.

Blood on the Snow
by Thomas M Kane
Levels 3-7

Art by Jaquay and maps by Diesel! This is an arctic/sub-artic mystery adventure. The characters are hired to go on a seal hunt and find out who the traitor is. Mystery adventures don’t work in D&D. The characters cast a spell and the mystery is over in short order. This one tries though. The adventure is long, in game time. Training takes a month and the seal hunt is two weeks long. There’s a good timeline of events that will happen if the party doesn’t derail things. It’s mentioned that the party CAN derail things and that the DM will need to go with the flow once that happens. More advice in that arena would have been helpful. As is the adventure is going to take a LONG time to prep. The wilderness/frontier town is well detailed, the timeline is extensive but not pedantic, and the NPC’s/hunters on the hunt are well detailed with decent personalities and motivations. Overall this would be great adventure if it were not set in a land with Detect Alignment, Detect Lies, Augury, Commune, etc. It’s going to take time to prep it. A LOT of time. It’s unclear if the payoff/treasure is worth going on the adventure. Another strong viking adventure if you were doing DOgs of War/Northlands Saga type gaming and put the prep in.

This is really a two-part adventure. The first part has the group assaulting a small thirty room keep. Bandits took it over and now the party is trying to take it back and find the people who once lived there. It starts with a HARD slog up a cliffside and an almost certain pitched-battle at the front of the keep. There are fewer options for the assault than the Falcon’s Peak adventure and fewer three dimensional notes, although, again, the first battle is up a cliffside path. Then again, the party is higher level and perhaps has access to invisibility and fly. The interior is not all that exciting and is further toned-down by a pseudo-dragon that tells the party where to go and what to do once they gain the entrance hall. Part two has the former family asking the group to to attack/explore an undersea triton lair to find the guys captured sea-elf wife. This part is slightly more interesting, as long as you take the view that the tritons are something like an 19th century english manorial estate. Except under the sea. There is little to no ‘sea’ feel from this, except maybe as window dressing. So as an adventure adventure for a more civilized time it’s interesting but as for having an undersea feel … not so much. I keep imaging that final scene with the mermaid king from the The Smashing Pumpkins video ‘Tonight.’ Except this adventure has a lot less flavor … but a weird civilized vibe that I kind of dig.

The Book With No End
by Richard W. Emerich
Levels 8-12

This was written by an asshole GM who thinks players have access to too many magic items. It starts with your 12th level character being offered 1,000 gp to go an adventure and fetch an artifact. Uh huh. Blah blah blah bullshit backstory. Oh hey, I forgot, you get a potion of Sweet Water if you the mission! The whole thing is full of advice on how to gimp the players. Don’t give the players an even break. Don’t let them use their divination magic. Don’t let them have fun. Blah Blah Blah. It seems that the gods don’t like talking to your 12th level clerics. Oh Well. Or, rather, maybe I god hasn’t figured out yet that his stats are in Deities & Demigods and I can shiv him the throat as easily as I can a kender NPC? The adventure map is a good one but the rooms are full of death traps, players gimping, and a whole lot of other junior high type adventure design. This includes a giant disembodied magical voice chiding the characters with things like “Naughty Naughty! Don’t ruin my fun!” Ooooo, a chess board puzzle! How original! There is also an excruciating amount of detail in certain rooms like the dining room and kitchen, for example, that has absolutely no effect on game play. Perhaps the only decent part of the adventure are the detailed notes at the end detailing the information that the characters can find in the various books in libraries prior to their journey. It reminds me of the stereotypical Call Of Cthulhu adventure where you go to the towns library, newspaper office, and historical society. The whole “heres what your research find. You need to put it together to find the dungeon.” is something that a lot of D&D adventures just assume and don’t show.