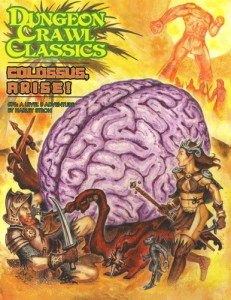 Giants stalk the shifting sands as the lost city of Stylos awakens from its deathless slumber. The Fourth Age of Man is at hand! All that stands between the gigantic hordes of Stylos and their conquest of the world is your band of adventurers. Sinister traps, implacable foes, and the crushing tread of the dread Colossus all lurk within these pages, eager to test the courage and cunning of even the most accomplished adventurers.

This is a hard adventure to grok. The first time I read it I thought it held promise but ultimately sucked. The second time I read it I studied the map first and then things clicked for me. It’s also going to be a hard adventure to use in campaign play. To use it best you’re going to need to digest the background pages long in advance of running it and integrate the mythology in to your game. If you do that you’re going to have a KICK ASS adventure for your players. They will be simultaneously drooling and messing themselves in anticipation of what’s to come. It’s a lot better than the ‘old’ DCC adventure line.

So, the worlds ending. Nothing we haven’t seem A BAJILLION times before, right? It’s one of the worst tropes in adventure design. If you’re going to use that as your plot/motivation then you better bring the noise. Harley brings the noise. In one page of big fat old man font Harley lays out a mythology for the end of the world. it’s tight. It has shades of the greek classics. It seems plausible and he doesn’t beat the horse after its dead. There are four ages of man, we’re in the third age, and the fourth is nigh upon us. Pretty standard bullshit stuff. But Harley makes it real through his writing. This, and the hooks to follow, are the key to the adventure working, I think. If you can integrate the mythology in to your campaign then when the hooks show up the players are going to slowly come to realization of what is going on and then GO NUTS once it hits them fully. There’s mystery here and there’s wonder, and that leaves room for the DM to fill things in. About a third of a page is devoted to working the mythology and hooks in to the motivations of the various character classes. Patrons & Divine are pretty straightforward, and, I’d say, overall the weakest. But just mentioning them gets your mind racing on what YOU could do to get things moving with the patrons & divines in your game. The other classes are more straight-forward: loot. By dropping hints and rumors and myths about the treasures and wonders, and the specific magic items/artifacts in the module, over time in your campaign then the players will be drooling when the opportunity arises. And the best hooks are the ones where the PLAYERS want to go on the adventure. Then come the triggering hooks events. Three options are given. The characters lords request an audience and demand they do something about invading armies. Or a giant statue shows up outside the city gates and throws a a necklace of “two score heads” at the group, declaring the end of days has come and on the new moon the city will be razed and all killed or taken by slaves. Or there is a section of dire portents and omens to experience. Seventh son of a seventh son with a birthmark, etc. This shit gets your mind RACING. Think of what you could by combining these events and slowly working them in to you campaign over a four or more game sessions! Omens appear as off-hand comments from the DM. Rumors of war and marauding bands, wildly varying, while the group is doing other things. The lords appear and demand action .. and then the statue appears. That sort of natural continuity is GOLD. The triggers and mythology really got me thinking about longer-term integration in to campaigns and the payoffs thereof. That’s good. That’s the reason I’m paying my filthy lucre to some game company. I want something that fires my imagination and gets me thinking. Something I can riff off of and gets me excited to run it. Harley brings the noise.

Then the adventure actually shows up and … and the review gets more complicated. The monsters here are top notch. There’s finally a good reason for fighting those LG titans from AD&D land. There are vile monstrosities. There’s a giant brain monster. The language used to describe these creatures is tight, and evocative. You really get a sense of them and that helps you then communicate that sense to the players. The treasures are top notch as well, as one would expect from a DCC RPG module. The magic items are unique, there are ‘mundane’ items to exploit, and the standard treasures are well described and interesting. The map is small but not necessarily bad. If the players are focused and know what they are doing then there’s only a few encounters they have to have. The rest of the maps is laid out in such a way that the rooms can serve as a diversion or distraction for the party. It’s not really an exploration as much as it is managing your party resources If you go exploring places you don’t need to then you’re going to probably have more trouble at the end game because you are weaker. Or you get some kick-ass magic items to help with the end game. And now the complicated part …

This adventure channels Kuntz in many places. That means ‘Hidden Depth.’ This is mostly constrained to the optional rooms on the map. How you feel about hidden depth, and crazy long room descriptions/details, is your own business. Suffice it to say that, just like the 8 Kings and Halls of the Mage-King, there is A LOT going on in many of the rooms. These are not the tight and terse rooms that I so much enjoy. Some of this is the hidden depth and some of this is the verbosity in describing that depth. When Harley is hitting all of the notes you get great evocative descriptions. And when he’s not your eyes are glazing over and you just want the fucking thing to be over and why the hell is he telling me that and so on. The rooms are more verbose than evocative.

I want to call out three encounters specifically for special comments. The first is the ruined city in which the temple/adventuring site lies. The exploration of this and the parties interactions with it are mostly abstracted. I like this, and perhaps could have used a little more. The group is 8th level. Abstracting the travel through a ruined city, and perhaps the exploration of it, seems like the right thing to do. I may have included a few more “you’re attacked by a hydra but quickly dispatch it” story-like elements in it, but then again that may be my personal taste, It feels right though, given the mythic elements of the adventure. The second is the first numbered encounter in the adventure. A large army lies before the entrance to the temple. This is handled in a very sandbox style. Several suggestions are given in how to adjudicate several common actions like sneaking or distractions. I like this sort of sandboxy encounter since it leaves a lot of room for players to come up with those wacky plans that make D&D fun. Finally there the final encounter. It’s more puzzle than combat … and the players success will depend on them figuring that out before it destroys the entire world. It can certainly feel epic and a campaign-topper if the DM expands the encounter a bit and let’s the creature run wild through cities, laying waste, and the like, while the party tries to stop it.

This entry was posted in Level 8, No Regerts, Reviews. Bookmark the permalink.