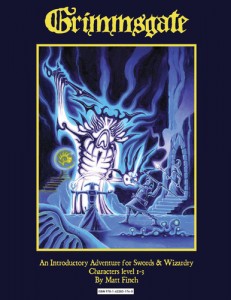 Deep in the wooded wilderness, the village of Grimmsgate is an outpost town on a seldom-traveled trail, right at the edge of nowhere. The village’s half-ruined temple of Law, dilapidated inn, drunken blacksmith, exiled trader and a few fur-trappers are enough to keep the bloody-minded denizens of the dark forest at bay, but nobody really expects the village to still be there in another ten years. The woods have become too dangerous for the trappers who once caught animals for fur, and merchants no longer travel the poorly-maintained road. What great evil and what fabulous treasures are to be found in these lands? A brave band of adventurers might make their fortunes here. Or perhaps they might never return…

This is meant to be an introductory adventure. It has a starting home-base, a brief wilderness around it, and an adventure in an old temple to get the characters going. It’s sprinkled throughout with “helpful” advice. The introductory village is not terrible, and the wilderness not bad, though small. The ancient temple is … I don’t know, bland? It’s got it’s high points, for sure, but it’s not what I’ve come to expect from Finch. I’d call it an average effort (meaning it’s better than 90% of the crap produced) but I’ve got no time, space, or energy for average. I don’t want to sound like a conspiracy nut, but this thing is so far removed from the ‘voice’ in other Finch works that I actually googled to see if it was ghostwritten. The writing is a lot closer in style to Rappan Athuk than it is Tomb of the Iron God.

The village of Grimmsgate, on the borderlands, is on the decline and has been for some time now. Trade no longer comes through, trappers and farmers disappear in the forest enough that they no longer try their luck and have moved on elsewhere. No lord wants to claim the land because of the dangers in patrolling it (Ha! Land is power to a lord, no way no one would claim it. Maybe not give a shit about it, but they’d claim it.) The players somehow end up there. Some lame hooks are offered. The Priests of Law charge you with a holy quest to investigate … sorry, brb. Ok, back, had to go throw up. No? How about ‘You inherit a dilapidated house in the village? Lame also?Ok, how about ‘Baron Somebody sends you look in to things for him to see if adventurers can succeed where a host of knights failed.’ No look, my fucking standards are not actually that high but they ARE higher than “crap laying in the curb.” That last one might actually be nice if you changed it A LOT. Maybe the players are a new knight or free farmers and are sent to the village … it becomes their holding in liege to their lord. That doesn’t suck nearly as much and would also seem to get the players MUCH more interested in the fate of the village. Might make a neato campaign. A mini-hex crawl.

The village is not terrible. There are maybe 11 or so buildings on top of a hill. The bases are all covered: inn, smith, store, cleric too old to go adventuring but who has some good scrolls to use like raise dead. Several of the other people are also covered as well, meaning farmers. The village is plagued by read-aloud text that seems forced. “This is a well-tended stone building with a roof of wooden shingles. The sign over the door says The Hilltop Emporium.” In fact, that entry serves as a good example for this entire section. As the sign implies, the shopkeeper has delusion of grandeur. All of the little NPC’s running around have some nice personality to make them memorable without being over the top. The descriptions of the people are very well done, communicating themselves strongly in just a sentence or two. But then it’s wrapped inside of shit. I LOVE foreshadowing, and there’s a bit of that at the beginning which serves as another good example. As the characters approach the village there’s a big block of read-aloud. It talks about their journey over the last several days and ends with “Do you head toward the village?” Totally fucking lame. Better to play out a little journey, not taking too long in it, and present the information in the read-aloud naturally. Because the information is GOOD. The characters pass weird shit on the road on the way. Bones in a circle around a human skull. A small red-stained wicker basket abandoned by the side of the road. A shallow unmarked grave. Some REALLY good creepy shit to sprinkle in an adventure to Pigstye. Ruined by being wrapped in a block of text.

The “Wilderness” map is small. It has four places of note on it. A 6HD black dragon lair, an ogre who’s taken over a ford, a (small) group of bandits, and a hill with some statues on top. None of these encounters are fleshed out much at all, just a sentence or three. This leaves them pretty open to interpretation by the DM to flesh out for additional adventure. So, not really something appropriate to the adventure at hand. The ancient temple complex is … oh … a pain to review. It’s arrayed around a hill with multiple entrances, ala the Caves of Chaos. That’s great! It’s a thoughtful feature, especially the hidden entrance in the woods. The majority of the temple though, under the hill, is one LONG hallway with smaller hallways and rooms hanging off of it. It immediately smacks of ‘linear’ but is slightly more thoughtful than that … but not by much. The main temple is on top of the hill and the rest reminds me of the basement/workrooms at Monticello: long hallway ending outside.

Lots of lame read-aloud text in the encounters, but not a lot of interesting things. There are a decent number of ‘flashback’ ghostly images showing the temples past. This ranks just slightly higher than ‘diary entries’ in my ‘things I loathe’ list. They are not doing anything more than showing the history of the temple; a history that is not useful in the adventure. There are a couple of interesting choices scattered about. A secret door revealed by leaves on the floor. Leaches (normal) in a pool of water. A ghostly spirit who’s not just there to be killed. That encounter, in particular, is one of the better ones, although longish. The spirit can reveal information to the players and reward them with grave goods, etc. Taken in that context the flashbacks are not AS bad, since it means the players may go ‘Ah Ha!”, but the game effect is still meaningless.

I’ll single out the monsters here for special mention. The adventure has manes, mutated cannibals, and mole-man hybrid cannibals. The art, which I seldom mention in reviews, does a great job at conveying the flavor of the cannibal-type monsters: gaunt, tall, horrific. The main villain is well atmosphered as well, with clouds of ash about his person, etc. Centipedes are described as bright green and shiny. Very nice imagery on the monsters. Well, SOME of the monsters. It’s inconsistent. Not all centipedes get that description, and the manes demons get none at all. The treasure is a great disappointment. The gems are just “4 gems worth 100gp each” and the magic items are just generic “mace +1” or “sword +1.” After reading an aside in the module about you can add flavor by creating your own monsters (the mole-men cannibals) to then encounter this blandness in magic items is a real shame.