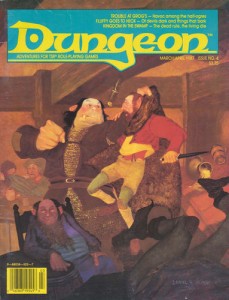 This is the first truly useless issue. The adventures have little to no redeeming qualities: nothing of academic interest, little to steal, and uninvolved. And all of this AFTER you read from the editor how tough it is to choose from all the great submissions. I’m still feeling my way in these older product reviews; I’m not quite sure what to focus on.This week it’s: some kind of synopsis surrounded by bile.
Kingdom in the Swamp
by John Nephew
Levels 6-9

A little shit halfling thief/borrower wants the parties help in going back to a castle with a vampire in the swamps. His friends we’re presumably captured when he fled the scene while the vampire attacked. There’s a small swamp adventure followed by the worlds smallest & lamest ten room castle for a vampire to hang out in. The vampire is cursed by Orcus and can never leave the small island in the swamp that his castle sits on. The wandering monsters ‘are up to the DMs discretion based on party strength’ and the swamp encounters are mostly lame. There’s a statue of Orcus that the vamp can see from his castle that would be cool if it played some role in the adventure: IE if there was a social element/break the curse/etc. The swamp does contain the one interesting encounter: an evocative little description about shallow graves full of rotting corpses … zombies! It’s a decent non-D&D-traditional zombies more in-line with how we traditionally think of them, in real life. The castle is small and uninteresting. But that doesn’t stop it from being described in endless useless detail. 5 pages of triple-column text for ten rooms. Ouch! The treasure here is very light. 1E is gold=XP, right? There needs to be more build up, a spookier castle, a social element … just SOMETHING to bring this thing to life. I’d stab the halfing in town and THEN go on the adventure so I didn’t have to put up with his cute little thieving ‘aw shucks, me?’ attitude.

This is a tournament module and it shows. Your ‘all thief’ party starts captured and is executed in 2 days if you can’t escape. Getting out of your cell is easy, then you make your way through a 10 level tower. It’s supposed to have a strong ‘sneak by patrolling guards’ element, but that’s not well documented, or illustrated. It’s just described and because of that you’re going to have to put in a lot of work to run it. You get points for knocking people out instead of killing them, even though they are going to put you to death in two days and they’ve killed all of your friends AND they will your families if you ever tell them your name. It does have one of the few things ideas stealing. There’s a running joke that they stole blind the palace of the King of Sark. There’s treasure scattered all over the tower from the palace and I found the running joke/content amusing. It’s a good reminder that continuity of that sort is a good addition to window dressing.

A completely linear joke adventure ala Castle Greyhawk. I’m still bitter about having purchased that thing when it came out, so I’m bitter about this adventure. Recall the silliest Paranoia adventures ever written? Same thing.

A ‘solve the mystery’ adventure in a small village featuring ham-handed diversity lessons about 1/2 orcs and 1/2 ogres. The village is described in verbose detail that manages to convey nothing much of interest. The interactions between the villagers is almost exclusively limited to ‘hate 1/2 breeds.’ They are not even characitures, that would mean they had a personality. Way too much text and not enough interesting content. Like all mysteries it gimps the characters: if you capture someone hired to beat you up then Charm Person doesn’t reveal who hired them … because they are too scared. Uh huh. Why don’t you just say ‘I wrote a weak adventure.’ There’s other interesting choices as well: can’t find the tracks? A friendly ranger helps you out! Can’t find X? A friendly Deus Ex helps you out! I can’t find a decent adventure. Who’s gonna help me out? There’s something like 23 pages of content here. There might be something like four pages of useful content. A half-ogre bar could be fun. Too bad they sucked the life out of it with the lesson they are teaching. What was that half-orc bar? Krom’s Throat? Now THAT’s an ethnic bar!