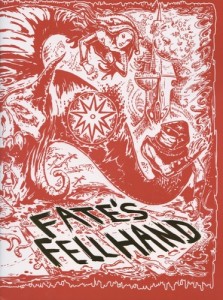 Awash in a sea of phlogiston, three wizards battle for mastery of reality! But with each new day all gains are lost and the game begins anew. It is up to the adventurers to upset this ancient balance, winning free of the shrinking demi-plane before all is reduced to the roiling stuff of raw Chaos!

Will you strike a bargain, swearing fealty to one of the fell masters? Or will you attempt to master your own fate, pitting your luck and skill against arcane foes? Whatever you decide, you must act quickly, for gray worms press in from all sides and time grows short!

A pretty decent site-based adventure with an event timeline, good NPC’s to interact with, and good magic items. It’s a pretty solid adventure. In many ways it reminds me of what I think Castle Amber should have been. In fact, a Castle Amber mash-up with this adventure could be VERY cool.

Let’s get the confusing stuff out of the way right up here at the top. DCC (3e) adventures suck. At least that’s been my experience with them. But my one experience with the DCC RPG was very positive and I came away impressed with how the game fostered the “D&D turned up to 11” feel and helped encourage those great situations that become stories we tell and retell about some bizarre things that happened. And it did it in such a way that didn’t seem forced or fake like some BS story game. And then there are the NEW DCC adventures, for the DCC RPG game. This is my first experience with them and I came off happy. I’ve reviewed a couple of the older DCC adventures in the past, either for OSR games or ones that had OSR elements. I was not amused. But not this one. This one is good. So, Old DCC modules: Suck. New DCC RPG: Great. New DCC Adventure modules: This one is pretty good.

So, there’s some hook. It’s one of the weakest parts of the adventure, just as the hook was lame in Castle Amber. “You wake up there.” Great, thanks, Genius. This one uses some dream sequence stuff to lay out some teasers and the such and then the party is there. There’s an oracular device in the module that I think would have made a better hook. Having the players want their characters to find that for some reason (id some magic item or something?) would have them WANTING to go to this place. It’s always better when the players dig their own graves under a tree where they string the rope for you. Otherwise it’s more of a “this is the adventure we’re playing tonight” kind of thing.

The characters find themselves in a small land surrounded by grey waste. There’s a manor home, a small lake, and tower framed by the moon. Slowly, day after day, the grey waste closes in, putting a time limit on the adventure. What’s very interesting here is that the three locations get eaten at different times on the timeline but the ‘plot’, which involved collecting objects from the three locations, isn’t derailed by the destruction of these locations. It’s quite clever. You need all of the thingies in existence, which are scattered among three wizards at those locations, but when the place get destroyed, well, you still need all of the ones in existence but now there’s fewer in existence .. Get it? It’s a good work-around.

The adventure is arranged as a kind of site-based adventure. You get a description of the locations, a rough timeline, a pretty good write-up of the various minor and major NPC’s running around, and some goals for the characters to accomplish. In this respect it’s actually one of the best puzzle/mystery adventures I’ve seen, although it’s not really a mystery module. The NPC motivations are short and communicate their motivations and personalities well. The area write-ups have some read-aloud text, but it’s usually not more than two or three sentences, which is about my limit on schnitzengrubem. There’s not a whole lot of encounter ‘things in the adventure. Instead you get some mythic places. A lake with fireflies that the light the way underwater, a tower framed by the moon with a magical moonbridge to get there, and so on. It feels like a magical otherworldy place. But again, this isn’t really about the encounter locations it’s more about the NPSC’s that are running around and how the players interact with them to obtain information and accomplish their goals. That’s not to say that there are not ANY encounter goodies, they are. A throne, a scrying pool, and so on still exist.

One of the things that struck me about this adventure was how it resembled the Psychadelic Phantasies line. Recall that these OD&D adventures contain no book items or monsters, creating a unique experience for the players to explore. In many ways this adventure has that same feel. The monsters seem unique, as do the magic items. I really like that. The magic items seems magical and the monsters are frightening. In particular, the NPC/monster magic-users are handled more in the OD&D fashion where they are just monsters with some special powers, rather than a full-featured MU class. I love me some reprobate/weird MU’s and they bring it in this adventure. One of the more interesting magical items is a shield that requires sacrifices to funtion ‘well.’ That’s a pretty cool item.

The descriptions are a bit long in places and frequently seem to duplicate or expand on the flavor seed in the read-aloud. I find that disappointing. There’s also a a problem with one of the core elements, I think. There are some plaques/cards that play a central role in the adventure. Given their important I suspect the players are going to obsess over them and the many ways in which they can exploit them. Several of the mechanics surrounding them seems a little loopholey. Usually I don’t care about such things but given the important of the items, and how players focus too hard sometimes, their loopholes seem important. Oh, that reminds me, there’s some pretty decent non-railroday stuff in here also. Things like “the players are trapped overnight … unless they have a magical way to get don form the tower” and so on. That’s an excellent reminder and in stark contrast to the railroad bullshit that happens in a lot of adventures” you can’t do this and you can’t do that”, usually because of the issues it has with derailing the train. None of that crap here!

I’m happy with this. It’s a solid adventure.