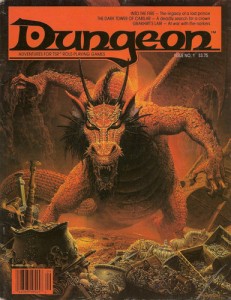 I’m a supporter of the OSR and strongly believe that a decent percentage of the newer products outshine the adventures published back in the Good Old Days. But, content is content and I’ve not seen many reviews of Dungeon magazine. I know that at least a couple of the adventures in its pages are good enough to use outright and I suspect there are a lot of good ideas to steal. My plan is to publish one review a week, on the weekend. I’m going to keep them fairly short; mostly an abstract and a few general comments so I don’t end up repeating myself over and over again.

Having recently completed my collection at GenCon, we’re off!

The hook for Calibar isn’t terrible. Assault on Edistone Point would make a decent realistic or low-magic adventure. Into the Fire is a decent dragon adventure with good wilderness encounters. Guardians of the Tomb is rough puzzle/trap/monster encounter.

I hate 2e. I hate the magical RenFaire stuff and the magical society environment and the streetlights of continual light and the garbage disposals of spheres of annihilation and the way it treated the magic and wonder as routine, ensuring that nothing was magical or wondrous. I would have SWORN on deck of many things that these were 2e adventures. When checking it turns out that issue #1 came a few years before 2e. Wow. I had no idea that 1e adventures sucked ass so much.

I hate boxed text. My eyes glaze over when I listen OR read it. I start to think about succubi art. I groan. I LOATHE it. There’s a lot of boxed text in these adventures. There’s also a lot of arbitrary forced decisions. “There’s no cleric available to join the party” and the like. It’s some kind of enforced DM fiat for no particular reason. It’s easily ignored but it shows and reinforces bad style. Along those same lines there’s some “You can’t do X because it would ruin the adventure” crap. Characters have scry spells for a reason: to keep their 7th levels character alive. Yeah, they are gonna know there’s a dragon. Better to let smart players plan than punish someone just so you can surprise them. After all, we’re rewarding player skill, right? There is also this annoying tendency in some of these to quote the rules back to you. Weapon Speed rules. Disease rules. Other rules. Great. You know more than me. I’m happy for you. If your adventure depends on me knowing obscure rules then you write a sucky adventure. If your adventure doesn’t depend on me knowing obscure rules then why are you wasting all this time telling me about them?

But there is a special place in my heart, next to my ball of white male rage, that is reserved for the Overly Detailed Backstory. Look, I get it: there’s dragons and white walkers and they are gonna fight. I don’t need page after page of what color gout the swineherds brother has when the swineherd is only barely glimpsed from the road. There is A LOT of space wasted on backstory in these adventures.

I threw up a little in my mouth when reading most of these.

A Prince is setting off to retake his kingdom but he needs his ancestral crown. The backstory is too long but the root of the hook is a decent one with the godmother hiring the party. I can see this as ‘one task of many’ to retake his kingdom, with a shrewd godmother and so forth. It could be a decent campaign or a good series of adventures to take place sprinkled through the background of a different campaign. It’s also just about the only good part to the adventure. A vampire lair with charmed monsters of every type scattered throughout, it’s full of boring magic items, monsters just thrown together (although from the Fiend Folio), and bullshit encounters, like a charmed mimic acting as a stairway step. There’s a powerful magic items … usable only in this dungeon that must be destroyed to get out. Lame to the core.

There’s some signal towers and the local mayor hasn’t heard from the nearby one in awhile. If you go fix whatever then I’ll give you 2k in coin. Too much backstory, again, but the ultimate plot involves a merchant house doing some sabotage to get ahead a bit. It’s mundane enough to be a decent low-magic adventure or maybe an intro adventure to some kind of City of Intrigue or Merchant Wars campaign. Make me think of Harn. (That’s a compliment for a low-magic adventure.)

Local heroic lord comes up with some lame excuse why he can’t go solve a problem with norkers and instead sends the party. Local NPC’s of note stair in to the air and whistle while twiddling thumbs when asked for help. This is mostly a lame dungeon crawl that ends with an invisible assassin assassinating a party member. That’s uncool. One part of the text spends almost half a page describing the operation and construction of a single secret door … I can taste the bile coming up again … There is a monster you can talk to and a little monster intrigue the party can play a part in, but the monsters all fight to the death and don’t go get help and their uber-super boss scries the party the entire time but doesn’t help any of his minions out … IE: the designer wants the boss fight to be cool so he gave the DM a way to Cosmic Zap anything interesting the party does. Lame. There are some decent loose ends at the end that could be turned in to more adventures.

A fey home, so the Elves in the title are more ‘fey’ than traditional D&D elf that has had all of the whimsical fairy sucked out of them. I like fey, but this one was hit & miss. This seemed a little mundane for a fey home and was organized pretty poorly. It’s more a short side-trek or wilderness locale than an adventure. A couple of the outdoor elements are interesting. Needs to be A LOT shorter and A LOT more evocative.

Into the Fire
by Grant & David Boucher
Levels 6-10

The cover adventure … so a dragon. The usual ‘too much backstory’ nonsense but overall a decent adventure and the highlight of the issue. The backstory and hook aren’t TOO terrible, once you wade through all the text, but neither are they average. The king sends you to look in to blah blah blah. There’s a decent amount of wilderness travel in this and those encounters are decent. They are LARGE encounters. Hordes of pilgrims. LOTS of soldiers (~100) on patrol. A force of 20 ogres or 12 trolls or 100 bandits. I thought that an above-average number of the random wilderness encounters were terse but evocative. Not quite old Wilderlands territory but pretty decent. The dragons lair is pretty good and it’s presented as a challenging 88hp foe. There’s a wizard’s tower that seems almost like an afterthought and is not done well at all; I wanted more weird magic stuff in there. The dragon has too many gimp items: anti-scrying, cold protection, etc. I guess it makes sense he would use them if he had them, but it seems a little too convenient and ‘lets gimp the players’ to me. There’s a decent non-standard magic sword and lots of hooks to follow-up on. One of the better high-level adventures, I think.

Guardians of the Tomb
by Carl Smith
Levels 3-5

Another short one. Just a single room tomb on a swampy island. The party gets locked in and is then assaulted by SCORES of shadows. Ouch. Extremely verbose and ultimately more trap than adventure, since there’s almost no treasure.Would make a decent wilderness encounter, if you were an asshole DM that thinks 3x as many shadows (3HD, drain STR) as characters (levels 3-5) is fun.