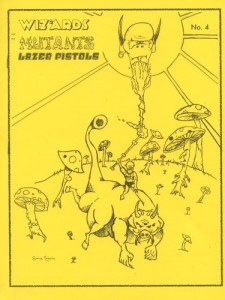 WMLP issues three and four contain additional levels for the Kihago dungeon. The initial levels appears in WMLP issues one and two, as well as in the Beneath the Ruins adventure published by Psychedelic Fantasies (previously reviewed). WMLP is a print zine with a few articles in it and sport the best cover art ever in the history of humanity. I want that shit on my gravestone! WMLP/Kihago/Beneath the Ruins is BAD. ASS.

Issue three contains part three of the Kihago megadungeon which is labeled as level three but is actually probably level two since issue two published level two and it’s closer to two sub-levels than real levels. Now that my bit of fun is over, let’s continue. The level contains 32 rooms with at least two entrances and maybe some other ways levels since an underground river with waterfall and whirlpool are there to take advantage of. The more interesting portion of the map contains a cavern complex that runs over the top of a carved rooms complex below it, providing some decent terrain features in the caverns and also in the rooms below. There’s enough variety in the map and in the looping hallways to keep both the players interested and the GM not working too hard to come up with interesting things to say about the rooms. There’s a nice little secret section of the dungeon that is concealed by illusions hiding secret doors, rewarding those players who dig around a bit and touch/search the walls. This feature is one I grok and enjoy seeing in an adventure, or rather I enjoy seeing the generalized concepts. There’s a nice little secret area that no one is going to suspect is there. This gives the players a great feeling when they discover it, or when someone on another level drops a clue or such, and gives the players a reason to return to a level. In addition I love the concept of Auto-Wins. A simple illusion hides the doors, so if you search you pretty much automatically find the door and can tell that there’s an illusion. None of the die0-rolling bullshit. A very similar concept os the old-school mechaniuc of giving hints that a trap is present, and the idea of a kind of back and forth interactivity between the DM and the players with the DM gradually giving more and more information about certain features as the players investigate them further. Discolored walls may actually be stains, Blood Stains! or acid scars, or something else to clue attentive players. Obvious troll is obvious. Obvious trap is obvious. Obvious illusion is obvious. Obvious secret is obvious. Well, assuming you are paying the slightest bit of attention.

The encounters here are exactly what you would expect from an OD&D adventure. A little goofball, a little weird, a lot of THE FANTASTIC. It is the type of feel I equate with OD&D and exactly what I’m looking for. A world where everything seems fresh and new again and the players get to experience something similar to the very first time they met a gelatinous cube or a fell in a bit. It’s the world of Whimsy and Wonder. A mossy corpse at the foot of a tree and a misty waterfall with a rusty chest behind it. A temple with a fruity smelling puddle in it. The control room of KTLA in LA. There are flamingodiles and vampire frogs. Come on, how can you not like something with a nosferoggu in it? Glow in the dark roaches and hyena men looting and defacing things. Oh, and Bitlinktaknerekt the Hell Gnome and the drunken ghost, a a psionic ninja from the fungal forests on the next level? Uh … Yeah .. a bad ass level that hits the classic and turn it up. The monsters are all new. The treasure is all new and your players will have NO IDEA what to make of either of them. Perfect.

Issue four contains part four, the Great Cavern. The required “giant cave hex crawl” that all megadungeons must have. Running around down here are several factions of creatures. In the 15 mile by 15 mile cavern you get about ten fixed locations and a decent little wandering monster table. There’s a random encounter generator in the back also. These tables, five or so, are meant to help get a DM’s imagination going. The idea is that you roll up a few of these ahead of time and then place them when the wandering monster tables indicates you should. This can result in weirdness that you the DM get to come up with reasoning for on the fly, the prior mentioned spurring of your imagination. Let’s see here … how about the remnant of an enchanted stronghold with massive mineral deposits. That could be pretty cool! Radioactive giant quartz crystals that have overgrown some kind of ruined glowing fortress! Nifty! Uh … I also combined ALL of the tables. But anyway, used correctly or fooled with they still produce some pretty awesome results and I liked the table more than many many of the others I’ve seen. There’s a nice selection of new creatures so all that’s missing is an OD&D treasure generator!

The Kihago levels are great and Wizards Mutants Lazer Pistols is well worth checking out. And when you do so make sure and mail the designer and ask when issue 5 will be out.

EDIT:
Fuck it! How about some more of that BAD ASS art?!