In the Halls of the Mage-King 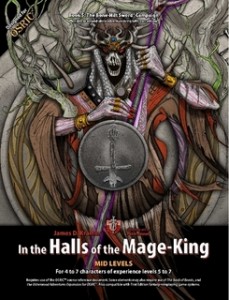 … before your eyes a room materializes as sand through an hour glass. But you have a feeling of uncertainty as to where the chamber actually exists. Valen’cya herself seemed to fall into the deepest depths of fear during your battle, just before … just before all went black. And now, she is gone, but the heat of her wrath remains behind. Through an open window you see that your group stands in a chamber, high atop the tallest spire of a castle. At the feet of the castle lay a sprawling port city. Huge it is, yet oddly quiet, and dark, and deserted it seems to be. And then, a disembodied voice chants quietly, and purposefully, but from what direction you cannot tell …

This is a 43-ish room linear railroad through an evil mage-kings tower. It reminds me a bit of Tower of Gygax or a decent little “Let’s go kill Sauron!” kind of adventure. It FEELS like an evil dudes tower, full of ancient evil THINGS. That doesn’t make it less of a railroad though. Kramer admits it’s one in the introduction, and to a certain extent that is required of a tower adventure, but it still irks. BTW: full of ancient evil THINGS also means: lengthy rooms descriptions full of puzzle-like things that will kill you. I’m struck with how similar it feel to a competition module, or maybe The Eight Kings.

In my youth I recall lusting after some of the old MERP products. The Barrow Mounds! Cool! Sauron’s Tower! AWESOME! Cirith Ungol!  Inevitably they did not really live up to the heights my adolescent mind had built up for them. What I wanted, I think, was for them to be like this module, full of the things this module is full of. This adventure contains four or so levels of linear set pieces. Generally a level will be described and it will have some kind of a VERY lengthy thing going on in it, channelling a Kuntz-like depth of things to do. Then there will be five or so “rooms” that are really more like stair landings, on the way down to the next level. The landing will generally have some kind of puzzle or encounter to be overcome, and are generally unavoidable. The final level, the catacombs, has a little more depth to the map, but only a little, and in fact it probably has fewer physical room features than the upper four levels of the tower.

Typically the rooms on the levels have a little set piece full of detail. Hidden alcoves, or niches, locked, trapped, sarcophagus, pillars, torches, and the like.  Braziers summon things, carvings beg to be kissed, colored lights … er, carpets, hypnotize and sparkle. Murals and paintings draw you in. There’s some D&D continuum of Fucking With Shit Gets You Killed. 4E is one end and Raggi’s modules are at the other end. This is closer to Raggi-land but not so far gone as to make playing with the toys worthless. And Traps! OMG there are traps! Chests, doors, triple-trapped … the Mage-King is playing for keeps!

The sub-levels/stair landings are a bit different. From two to three there are nine different landings that must be traversed to get to the next set of stairs down. These are done in order and each is some sort of challenge. These serve as the wandering monster tax and provide temptations for the party to expend resources prior to their getting to next real level and its bounty of Freaky Evil Things That WIll Kill You.

I’m not really sure what to think about this. It’s a better Barad-dur than the MERP one. It’s also pretty linear, some of which necessarily comes from it being a tower adventure. I suspect it a pretty decent high-level adventure, especially in light of the challenges that come with writing one of those things. I think it’s better than 8 Kings, but high-level adventures are sooo difficult to write and so few that I’m not sure how relevant that statement is. It’s certainly an evocative place and your players will remember it, probably more so than a trip to the Tomb of Horrors.

3 Responses to In the Halls of the Mage-King