Ruins of the Undercity 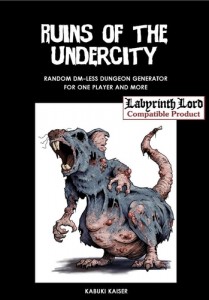 Deep beneath the streets of the City-State of Cryptopolis, sanctuary of the lich-thieves and abode of the Red Goddess, sewers and ancient ruins mingle together into a labyrinth of horrors and wonders.

I wouldn’t normally review something like this but it’s getting close to GenCon so I’m trying to eek out a few more reviews before I refill the review pile at the con. That means non-adventure stuff, older DCC, Dungeon magazines, and probably even some 4e. To get you through these trying times just keep in mind the pile of Frog God, OSR, and DCC stuff that awaits in the holy shrine of the god of commerce at GenCon …

This is a random dungeon generator for solo play. You know those tables i the back of the 1e DMG that created a random dungeon? This does something similar, except it has a few more rules. Campaign rules and the like. The experience ends up being a little like playing Warhammer Quest with the expanded campaign rules in that game. Fun … in a certain kind of way for a certain kind of person. It reminds me a lot of those boardgames that came out at the dawn of personal computers. Super complex and involved boardgames that you could play as a kind of campaign … a genre that TOTALLY died out when people found better solo activities on PC’s.

Basically you create a group wander around town for a few days buying gear. There’s a chance each day that something strange will happen to you. This ranges from goofy merchants to love interests to ghouls or shadows attacking you. Then you proceed to the dungeon and use the random tools to create a dungeon map that you explore. There are a decent set of rules for most aspects of exploration. The whole adventure is predicated on keeping a kind of Captains Log of your adventure. If you don’t write down you are searching for traps then you are not, and so on. Thus over time you get a written record of your adventure. Of particular note is the depth of the traps table and the number of different magical effects that can befall your group. There are also some rules for coming back to town, selling your loot, and doing things like buying a stronghold, getting on the city-council, getting married, and so on. It seems like a decent little mechanic for blowing some time until you die.

It doesn’t, though, seem particularly interesting in the environments it creates. Maybe it’s because I reviewed WMLP #4 yesterday and it had a random encounter generator in it. That one created crazy and wondrous environments that a DM could then fill in. I think I rolled something like a ruined enchanted stronghold with mineral deposits, which immediately brought to mind giant glowing ‘fortress of solitude’ crystals thrusting up through the ruins of mighty stronghold, destroying it. The WMLP table was full of strong imagery that your mind rushed to fill in the details of. This creates rooms with a broken pot in it. It’s not the same. Not at all. Not even close. There’s a great deal of attention paid to the mundane but not much paid to the fantastic. Various lighting types in the hallways. Or the dozen variations of stone and rubble combinations that make up the corridor builds. Oh, the corridor is dark and moldy. Or its got a puddle in it. Oh, I found a hat in the hallway. Great. And there’s a battered shield. Zzzzzz……It’s all pretty generic, mundane, and boring.

I’ll probably keep it around and me and the wife will try it out together as players, as a kind of campaign boardgame. Maybe.