UK-S01 Blood of the Dragon 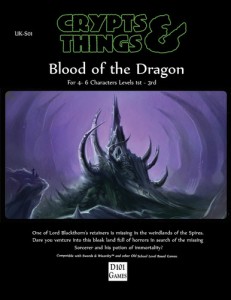 “Under a land shrouded in volcanic ash punctuated by rocky spires that tear at the sky they say the Great Dragon sleeps. Tyanos the Black, Trickster god of the long dead Hu-Pi people stole their blood and bottled it for his insane delight. As drink of the gods it confers immortality to mortal man, but at what terrible price?

The very quest for this elixir is insane. A trip into a harsh and unforgiving land of the Spires, a poor and bandit ridden weird land, inhabited by the likes of Black Joop, Nigus the Headless and the Mother of Hydra. Names that should send a shiver down your spine. So pick up your sword, down the last of your ale to steady any nerves and stride off towards a great adventure amongst the rocks that defy the sky.”

THis adventure makes you want to run it. This is an interesting little setting and adventure. There’s a small setting, a couple of brief villages, a small overland journey, and an eleven room dungeon. It does a decent job of “show don’t tell” and the read-aloud is, at least, interesting. It’s light on loot, but that may be a C&T thing.

Before I saw AS&SH I was pretty excited about it. Then I played in a game at GaryCon and review two of the modules. That pretty much killed off the Swords & Sorcery thing for me. I knew about Crypts & Things but didn’t really follow it. After seeing this adventure I’m going to look in to it more. That’s exactly what SHOULD happen when you release an introductory product. It should get people excited. Imagine ASE1 without the gonzo sci-fi but with the bars from Korgoth of Barbaria and the vile sorcerers from ASE. That’s gonna give you a decent idea of the setting.

The setting material is brief: about three pages. Half of that is a timeline and the other half a gazetteer from Hongra the Horny. A) That’s a cool name. b) That’s some tight ass writing to get an entire region in to three pages. C) It’s fucking awesome. Did you read those names in the intro? Tyanos the Black? Black Joop? Nigus the Headless? The Mother of Hydra??! A land where the sky is piercer by rocky spires and the plains a wasteland covered by ash? Come on, that’s some pretty cool stuff right there! The descriptions are ridiculously evocative and leave the mysteries open. This makes your mind race. What is it? Who did that? Was caused that? Your mind then races to fill in the details and that builds on itself. This is EXACTLY the sort of thing I want when looking at this sort of material. I don’t want your entire shitty world explained to me. I want you to leave things open. I want to gaze in wonder at the mysteries. Explaining things kills the mystery. [Insert another lame Bryce I Touch Roses lyric here.]

The adventure proper is called The Lair of the Battle Apes and is pretty straightforward. And AWESOME. There’s a crappy little village that’s really nothing more a bandit stronghold. My kind of town! The bandit leader is slowly going insane because of a sorcerer who makes him a vitality potion called Blood of the Dragon. So far so good! There’s a crappy bar that serves crappy sour wine, and even that’s watered down. The bar has jars full of pickled heads and the floor is scarred from axe marks and bloodstains from when the ‘Lord’ did executions there during his takeover. The Lords castle entrance is full of bodies and heads strung up outside … but not in an ironic way. This is a perfect example of showing instead of telling. “The Lords a jerk and little more than a bandit.” Well, that’s a boring thing for a peasant to say. But drinking crappy wine in a former place of execution decorated with pickled heads in jars? That sends a message to the characters AND the players. The village isn’t really described much. You get a good sense of the bar and of the Lords stronghold/tower, and you get a VERY good sense of the general vibe and nature of the village and nothing more. Casual readers who know that it’s about this time I complain about the village. Yeah, the villages is short on NPC’s. It’s short on personalities. It’s short on interactions. Some more of that would be nice. But what’s there is so … I don’t know … descriptive? evocative I guess. It’s short. It’s terse. It’s BAD ASS. It inspires. It makes you want to run it just so you can interact with the party. That’s what a product should do. Get you excited. Get you juiced up to play as the DM. Nicely done.

The journey to the adventure site has four or five wilderness sites for adventure as well as a wandering table. Giant stone heads laying about. Weird ancient monuments. Scouts licking their wounds. A giant headless statue (8 HD!) wandering around looking for its head. Man-rats! “Lord Blackthorn’s scout – a wise and hardy type who rides the spires.” That’s something I can work with. The whole thing is weird and erie and has a kind of foreboding to it that’s not usually present. Again, good but short descriptions and your mind fills in the rest. The actual Lair is short at only eleven rooms, but what’s there is great. Why is the sorcerer a vile shit? Well, there’s a naked and headless body of a woman on a vivisection table, with a row of jars behind it with various people’s heads in it. It was freaky in Walking Dead and it’s freaky here. Another example is a room full of rubble with a guys body sticking out. Pulling it out leaves a *squish* as his upper torso comes loose, trailing his guts. No, it’s not really grossly described but it IS described just enough to once again get the DM’s mind going. There’s a nice little tie in to Planet of the APes … which may you tie this thing in to Many Gates of the Gann we well. The treasure is a little sparse, not much money or magic. Maybe that has to do with an advancement table in C&T? There is a nice little magic tome that’s well described and horrific … and will make the players want to use it to boot! Go ahead … push the big red button. It’s shiny!

7 Responses to UK-S01 Blood of the Dragon