DLD1 – The Courtyard of Gerald Red 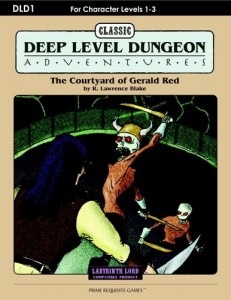 Gerald Red held evil and blasphemous battle games for the public within the confines of his courtyard. When the local officials came to put a stop to the bloodshed, Red vanished, leaving behind a terrible legacy of horror and death that surrounds his courtyard to this very day. Can your characters conquer Red’s construct and put the surrounding communities of Irllendom at ease?

This is a simple eighteen room exploration of an old villa and linear caverns underneath. It tries hard, but fails in execution, with confusing maps, too much text, and not enough things to play with. The nice parts end up lost and it comes across as just another ruin stuffed with some monsters.

This is a two level ruin with about 10 rooms on the upper ruin of a villa and eight or so more in the caverns underneath. Sorry, “labyrinth” underneath. Where “labyrinth” is defined as “a straight hallway with a couple of rooms hanging off of it that then dispenses with even this variety and turn straight linear.” This may be a good example of the entire adventure. It tries, or thinks it does anyway, but fails in its execution. Consider the maps. Level one is, I believe, supposed to to be the upper ruins of a kind of gladiatorial villa, like something out of Boobs & Blood Spartacus. None of that is conveyed through the map though. It’s got a totally black background that the outline of the villa is drawn on. This conveys none of the “ruined” nature of the villa, or the fact that it exists in the wilderness, or the the ability to ‘come in the backdoor’ or through the roofs or anything similar. There is supposed to be, I think, a sense of elevation on the map. Iron barred windows. A gladiatorial pit. A viewing box above it, and so on. The second level has some water features that are clearly supposed to be of varying depths but its not clear at all how deep the water is at various points. To be clear, I’m not just pixel bitching about typos and the like; I have a very high tolerance for that sort of thing. This is different. The choices made in the map design don’t convey the 3-dimensional nature of the features. Hmmm, that does sound like pixel bitching. Anyway, some extra effort in this area would have both cleared up the confusion and added some much-needed imagination, at least to the upper ruins. Some detail about the environs around the main villa would have been nice also. Trees nearby? Outbuildings? A terrific opportunity was lost.

The upper ruins are a curious mishmash of neato and boring. The central feature is the courtyard where two animated skeletons fight, all Ray Harryhausen style. There’s a kitchen with stirges in the stovepipe. And …. that’s about it for interesting features. Sure, there’s the generic three orcs and five kobolds that seem almost required for every adventure of this type that comes along, but that are presented is a horribly bland way. Oh, the adventure tries to conjure something up. The orcs send their wolves in before hiding. The kobolds are starving and want food. But rather than expand these in to something interesting they just peter out in to “they get angry if questioned” or “they attack.” The writing style tends to be verbose while offering little in the way of interesting things for the party to interact with in a meaningful way. Likewise the descriptive style doesn’t really convey much useful information for a DM looking to make the adventure more interesting. It comes across as one boring and bland room full of useless text after another. The second level is more of the same. I love fungi but the Shrieker cavern downstairs has to be one of the most examples I’ve ever encountered. The big encounters down here are some giant fish that attack while the party is wading and some trogs that throw rocks down on the party. Both of these set-piece like battles suffer from the map/elevation/feature issues I mentioned before. That could be much more exciting and evocative if the map conveyed the environment the (poorly) described rooms are trying to convey.

The place is stuffed FULL of treasure, especially magic items. The linear nature means that most if not all of it is going to be found. It’s all just standard book items. Shield +1, +1 war hammer. goblet 100gp. Gem 100gp. Maybe the only exceptions are the full array of undead-fighting tools, like garlic, holy symbols, wooden stakes, etc, and a set of engraved rings from the former owner of the complex. These don’t add much of interest but they do try, which is better than the generic magic items and generic treasure that inevitably leads to generic adventure.