B1 – The Tumbled Towers 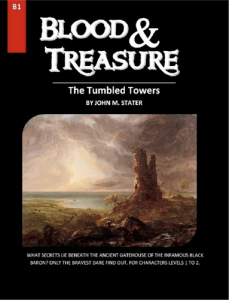 What secrets lie beneath the ancient gatehouse of the infamous Black Baron? Only the bravest dare find out. A Blood & Treasure adventure for characters levels 1 to 2. Compatible with most old school fantasy games.

A pretty average little dungeoncrawl. The page count is misleading since only 8 of the 22 pages are the adventure, the rest being pre-gens. The dungeon has a decent, and short, backstory and a couple of interesting rooms. Mostly though it comes across as mundane, with rooms of kobolds & hobgoblins and nothing interesting.

John Stater does a LOT of hex crawls. I like those hex crawls. He generally manages to convey a goodly amount of whimsy and weird in the his short descriptions of the various hexes. As far as I know, the Tumbled Towers is his only published adventure that is not a hex crawl. It’s a disappointment, conveying little of the wonder and whimsy present in his hex-crawls. It starts off well. The backstory is only a paragraph or so long with maybe another paragraph before the dungeon starts. That first paragraph managed to introduce some great elements to fire the imagination: The Black Baron. The Trim Tumbled Towers. This is the kind of content I expect to see in a Stater work. The kind of brief statements that get your mind racing about the possibilities. Then reality sets in.

Kobold guard post. Kobold nursery. Kobold barracks. Kobold lair. Kobold rubble pile. Kobolds Kobolds Kobolds. These are not interesting encounters. These are rooms stuffed full of monsters and an excess of mundane detail. Oh, they have a brazier that they burn bits of wood, charcoal and dried fungus? How does that detail help me? Yes, a big flaming pile of a brazier can make combat more fun but knowing what they burn in it does not. I don’t recall the length of the entries of the kobold lair in B2/Keep but it didn’t seem like an entire boring paragraph each. This then is the central problem of the adventure: boring rooms with too many boring/extraneous details. Content needs to add to the adventure, not be something trivial to waded through. Slavish devotion to stat blocks doesn’t help much either and recalls the bad old days of 3e stat blocks. The rooms here, full of kobolds, hobgobglins, necromancers and the undead, seem static. There’s not much in the way of interaction between the various groups. Signs of a battle, or some slaves, are the extent of the faction here play. That’s too bad, it would seem to be an environment tailor-made to run other interesting things in. Bugbear leaders and vile witches and cowardly toady’s … all just fodder for the sword with all of their promise lost.

There are some high points here and there. A submerged door. Jewels in the wall that sprout water when pried loose. There are more that almost good. A mad druid with giant bat buddy or a ghoul hiding behind an ornamental wall sigil, waiting to be freed by grave robbers. Ramping back of the boring bullshit descriptions and maybe offering a little more in the ‘exciting’ category would have turned these in to something cool. Maybe the mad druid rides around on his giant bat overhead throwing piles of shit at the party. Or the party can CLEARLY hear AND smell the ghoul behind the solid silver seal … how to get the loot without getting eaten? Short little sentences that convey action or the promise of, instead of endless descriptions of trivial detail.

This is a decent enough dungeoncrawl, with 31 or so rooms in it and a good-enough map. If I was desperate for content I’d gladly turn to this instead of the vast majority of the muck I review. What it’s NOT is a good representation of the type of content Stater is known for (or maybe “that I’ve built him up to be in my own mind.”) I’m gonna give it a solid AVERAGE grade … which means it’s better than 90% of the crap published but not good enough for me to hang on to or be excited about running.

1 Response to B1 – The Tumbled Towers