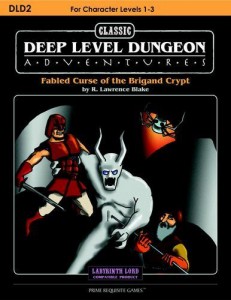 The legend of an ancient crypt outside the ghost town of Iron City tells of a powerful curse and those who venture there will surely meet their doom. A group of bloodthirsty brigands moved into the city, using its rotted dwellings as a base for their terrible raids on local travelers. When the thieves suddenly vanish, fears and questions arise about where they went and what was left behind. Can your party survive the traps and puzzles that surely lie within the crypt in hopes of finding the brigands’ abandoned treasure?

This is a simple thirteen room linear tomb with a brief outdoor encounter outside the tomb. It’s full of undead, puzzles, and a fabulous treasure horde that challenges the definition of the word ‘hoard.’

Evil Bob and Evil Ted were brothers. Evil brothers. They rules the land, evilly, from their mighty Iron City of evil. They had themselves buried in their evil tomb and cursed the land, as evil is wont to do. People shunned the area around their tomb, thinking it was evil. Except for some evil bandits who moved in a few years back. The bandits haven’t been heard from in awhile now, three years or so. Could some evil fate have befallen them?

Trust me: my background is better, and it has the added benefit of being terse. The IRON CITY actually consists of about a dozen dilapidated one-story wooden buildings, not described. The “city” has exactly one interesting feature. It’s not the temple. That’s just there to provide a magical teleportation spot for the various “keys” that the party will need in the tomb. You pick them up at the temple and deposit them in the tomb where they teleport back to the temple again for the next bunch of suckers. It’s not even really the mad lunatic that hangs out in the ruins, although he’s kind of related. There’s a magic floating eyeball that roams around the ruins, summoning monsters, firing eye bolts, and generally being a pain. THAT’S interesting. The lunatic knows about it and rants about it, which is how he’s involved. Unfortunately the adventure isn’t really long enough for the magic eye to have its full impact. At best the group may have only a single evening to have to deal with it. They’ll probably just kill it and go on about their way. But imagine if it were not 1 HD, but several, let’s say 6 or 7. And let’s imagine that the tomb was actually a multi-level dungeon that couldn’t be cleared in a single session. Then you’d have the party ducking and dodging around the eye, avoiding it, plotting against it, and it would take on the role of a kind of recurring villain. That would be cool. So there’s at least one idea worth stealing in this adventure.

The tomb is a tomb. It’s linear. You have goofy keys you have to use and collect and use. There are goofy puzzles to solve and goofy things to play with. Oh, wait, no THERE’S NONE OF THAT. Well, except for the key bit. Enter a room. Fight some monsters. Maybe use a key. Next room. The dungeon is linear so it’s just a matter of following the hallway/door. Several of the 13 rooms are essentially empty. Several more just have a monster. A couple more have something “interesting”, and I use that term lightly. There are a couple of crypts to poke at and a couple of arrow traps to set off. The best bit, by far, is a statue you have to reach your arm in to to grab/deposit stones. I like statues and I like reaching in, it’s a classic effect, but this one is just so blandly presented that it’s hard to get excited about at all. The end of the adventure has a medusa fight and the “horde” of the evil dudes: 2000gp and too many magic items. Joy. Boring mundane treasure that adds nothing to the game. Boring book item magic items that add nothing interesting to the game.