SM3 – Shrine of the Oracle 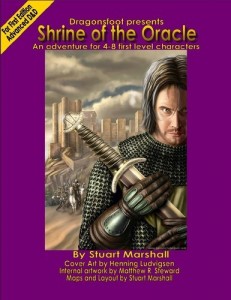 This module contains a small religious temple, well done, and a near by basic and tough two level dungeon. The shrine is quite nice but the dungeon too simple, although difficult. The shrine is worth lifting.

This adventure is eighteen pages long and the shrine portion of it is only about two and a half, with the rest of the module being devoted to a nearby dungeon. There’s not a lot of messing around with bullshit background in this one. There are just a couple of paragraphs of background information combined with some hooks to get the players moving to the shrine before the designer jumps right in to the shrine. I like this. I’ve always hated being bogged down in pages and pages of background information. I’m not reading a novel. I’m prepping for a game. The designer does a good job in providing some background that can link up with the previous modules or stand alone. For example, the temple leader is interested in the club-footed girl in the village from the last set of adventures, or she could be linked as a source of information for a vampire-like creature prowling around nearby. Anyway, it’s short, clear, plausible and interesting enough to provide the needed pretexts.

The shine proper has about eleven sites described. “Described” may be the wrong word to use. The eleven various sites all get a short one or two line description but, to borrow a word from the last paragraph, the sites are just a pretext for the real meat: the NPC’s. The site descriptions range from basic, like the guard barracks, to basic and strange. The Pen of the Holy Goat. The Omphalos carved with vaguely disturbing glyphs. The monoliths, supplicants cells, and naked bathing pools. The latrines. Wait! Wait! I know, latrines/lavatories in a module is usually a sign if a crappy module. They show some need to “explain” things. Not here. In this one they are a hook for an NPC. And in fact that’s what most of the eleven site descriptions are. Reading through then I found myself continually thinking of how they could be used by the NPC’s to interact with the characters and how the players would get themselves in to trouble at the sites. And that’s just EXACTLY what site descriptions in a NPC locale should do. They are not some frumpy Victorian catalog of an accurate depiction of village life. They are springboards to adventure. You just KNOW that someone is going to try and get a look at the naked priestesses bathing in the springs. Or mess with the goat. Or the holy rock. That’s why things get described, or should anyway: so the group can interact with them. Most of those eleven sites have something going on that can lead to a bit of fun without too much of a stretch. That’s not the best part of the shrine though. The best part are the NPC’s. The shrine is down to the last few priestesses, three in fact. A small frail leader who blinks nervously, a flighty and giggly 25 year old, and an overweight slightly bitter and older ‘junior sibyl.’ Those would be good descriptions to run with but there’s more. The leader has a reputation for being fabulously wealthy and a giant slayer. The flighty one is an act covering a calm and composed woman. The older junior is looking to shirk her menial duties. These NPC descriptions take place in a short quarter page or so, including stat blocks, and provide more than ample nuggets to get any DM’s creative juices flowing. Combined with the site descriptions you get a really nice little shrine description that could be dropped in to almost any game. Further, the head is high enough level to cast Raise Dead and other other spells the party might need, making the groups interest a natural. The Splinters of Faith series from Frog God tried to describe a bunch of temples of different faiths but they came off hokey and uninteresting, despite ratcheting up the fantasy elements. This shine, in contrast, comes off realistic enough to be plausible and interesting enough, with enough potential hooks implied, that I WANT to use it and throw it in. It really is the kind of the thing I like to lift to include in my own games.

The rest of the adventure is less than good. The priestess gives the party the mission of checking on another group that disappeared in a nearby dungeon. That’s a lame and uninteresting hook. There is a nice little wandering monsters table on the way to the dungeon. The forest is full of protective centaurs (playing the “we barely tolerate humans” game) and petrified goblins, as well a a few bandit and humanoid encounters. Each of the encounters gets a sentence or two to expand on them a bit. I like that extra detail; I think it really helps cement the “feel” of the environment a lot … in this case a pretty idyllic forest with a few invaders a sense of the past lurking underneath.

The dungeon is not very good in most respects. There is almost no background provided at all. “A group of adventurers went here and didn’t come back” is just about the extent of the background. No reasons at all for it to exist, just a simple note of “Room 1. Entrance Chamber” and off we go. It needs just a little background to help the DM fill in the missing details. Wizards lab? Old fortress? Former haunt of The Evil One? The map is quite disappointing also. It has two levels, with about 36 rooms on the first level and 25 or so on the second. Both tend to be a linear branching style of map. The first level, in particular, is divided in to three distinct sections with a single way to each section. Explore section one, then section two, which leads to section thee, which leads to the entrance to level two. The first section has a couple of very small “room loops” but the entire thing has a layout which really doesn’t support explorative play. IE: you can feel like you’ve cleared the dungeon, and tat’s not a good thing. The wandering monsters are mostly vermin without further explanation.

This place is ROUGH. 40 jermlaine in the first and second sections. 60 tribesmen in the third section. 120 tribesmen in the second level. And that’s in addition to the ‘normal’ room encounters with vermin, skeletons and the like. Ouch! Nothing wrong with that, some of my favorite modules have a shit-ton of enemies in them. I like it! It IS going to be a surprise for the 3e/4e players though. The rooms generally have something going on, but they feel disconnected from each other and lack … flavor? even though they each seem to have something. A dead gnoll female with tattoos and rot grubs. A locked bronze door (empty storeroom on the other side, how exciting!) A waterlogged chamber full of fungus. A poltergeist rooms. Rooms full of dead vermin (evidence of the last party) The writing is terse enough, with 7-8 rooms to the page, but there’s just not enough interesting going on in each room to support any kind of interactivity. The clues to the last groups location are nice, and work with that hook, but there’s not much beyond that. The lack of a good dungeon background makes the problem worse since it’s harder for the DM to fill in a coherent story. There’s a bad guy at the end of the dungeon but he suffers from Lareth the Beautiful syndrome. There’s build up to him so when he pops up he’s just another monster to kill. There’s sense of tension.

The treasure is truly disappointing. The mundane treasure is mostly in the form of boring old coinage and the magical items are almost entirely book items like “+1 swords” and their ilk. The previous modules from the designer used minor magical items extensively but only two show up in this adventure. That’s a serious disappointment. Magic and mundane treasure are a reward and should feel like it. They should feel special, the magic items in particular, and convey a sense of mystery and wonder. “Sword +1” doesn’t do that.

Steal the shrine and ditch the dungeon.