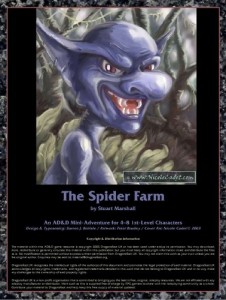 This is a small ‘tactical’ adventure in which the group frees a small farm from goblin invaders. The setup is a bit free-form, with no presumptions about how the the party will resolve the situation. The magic items are interesting, as is the location (although it trends towards 2e silliness.) Otherwise it’s a pretty average adventure. Which makes it better than 95% of all adventurers ever written. But still, average.

The adventure takes place in and around a spider farm. There are maybe twenty buildings above ground and maybe fifteen or so locations below ground in the spider pits. The farmer raises spiders below ground and then harvests the spider silk, further processing the spider bodies when they die. It’s a cute little business description for a fantasy world, if you’re in to that kind of thing. I’m not really in to that kind of “magical society” environment, but I must admit this one is done well. It’s not the throw away description that usually accompanies a business description. As I mentioned, there are twenty or so building descriptions and a decent number of workers, 25 or so. Again, not something that you usually see in an adventure. Industry is usually skipped over.

The building descriptions, including the spider pits, are pretty mundane. Realistic and mundane. There’s just not much going on in them, except for the goblins. The buildings, post-invasion, show how many goblins are in each one. This is laid out pretty plainly. The net effect of these two conditions, the building descriptions and the goblin descriptions, as well as some comments about playing the goblins intelligently, give you a feel for how the adventure should run. You have a farm described. You have some goblins described. You have some advice for how to run the goblins and a hook to get the characters going. GO!

The adventures problem is two-fold. First, it’s hard. This is NOT an introductory adventure. Oh, it says first level all right, but any 3e or 4e or n00b group is going to get themselves killed off FAST by a 25+ strong, intelligent, goblin raiding band. There’s nothing wrong with its style, but it’s written for experienced PLAYERS with inexperienced CHARACTERS. Second is the environment proper, the farm. It’s a bit boring. There needs to be a little more going on. Maybe some scaffolding, or giant boiling caldrons, so something similar. There needs to be more for the players to work with and use in the environment over the course of the adventure. It’s a minimally described and realistic location … it needs more to sustain imaginative play.

The treasures are, once again, excellent. Stuart write a free downloadable book called something like ‘The Tome of Minor Magical Items.’ This adventure has several. From a mug that fills with ale (created by a group of ale gremlins in a extra-dimensional pocket … who don’t use enough hops) to items that give you an additional first level spell, or give the cleric the ability to roll twice for cure light, taking the best of the two rolls. They SEEM magical. I love that kind of feel. A lot of the mundane items are similar: the are objects rather than just raw coinage and have enough little flavor text descriptions behind them to make them nice.

I think the real issue here is that the adventure seems like something that an experienced DM came up with 15 minutes before the players showed up. Given a short description of “Spider farm with 25 workers gets invaded by a 20-member warband of smart goblins.” what would YOU come up with during actual play? The amount of additional exposition/flavor is rather small. The goblins worship Lolth and sacrifice 3 people a day to the spiders until the last of three days when they sacrifice everyone. The spider mother is gross and bloated and can’t move well. There’s an egg sac with 95 more in it. The spiders launch continual attacks. Webs don’t really burn well.

It’s a good set up but it’s missing a lot of imagination and environment that would turn it in to a really excellent adventure.

3 Responses to SM1 – The Spider Farm