The Corrupt Crypt of Illmater 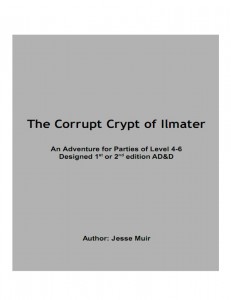 This is a short adventure in to an old crypt system. It’s pretty plain, for the most part, and uninspiring. There’s no background, so it’s just a pure crawl small crawl to drop in.

There’s no background here; the adventure jumps right in to encounter one on the wilderness map. This is more than a little strange to see in an adventure module. Ultimately I don’t think it matters; most hooks suck and most dungeon backgrounds suck and it’s pretty common to replace the hook or the background with something else. Still … it very weird to just see the locale detailed in a background-free way. I’m not really sure I know what to what about it.

Outside of the crypt complex there are four encounters while there are four more in the graveyard before the group descends in to the crypts proper. Outside there’s just spiders, were-rats and ghouls. There’s also a druid that can be troublesome if the party desecrates the forest. Otherwise … nothing much going on outside. The druid encounter could be used as a kind of hit and run series of encounters if the party linger about and earn his anger but that really doesn’t seem likely given the length of the adventure. The other wilderness encounters are just … boring … with read-aloud text. The four or so cemetery encounters are well enough for token encounters for potential tomb robbers but there’s just not enough there to sustain an exploration of the many graves.

The maps are simple linear/branching affairs, with a couple of secret passages that are going to be VERY hard to find without magic. It’s a very simple lay out with a very simple set of wandering vermin to go along with it … mostly rats of one type or another. The rooms here are really not very interesting. There’s a blocked-up stair passage and set piece with a were-rat on a throne but otherwise it’s just monster boring room, monster boring room. The second level is more of the same but this time it’s undead instead of were-rats. Shadows, ghouls, vampires. There’s a single interesting room, with a basin in it that can perform a variety of healing. Otherwise it’s more of the same: see room, fight monster, loot room. I realize this is a boring-ass short review but there’s just nothing in this place to interact with. Yeah, you can loot some graves. And you can pry out some inlaid gemstones. That’s nice. But there’s just so much “enter room fight monster” stuff that’s it becomes repetitive … and the module is short!

There are a couple of examples of better magic items. A chalice that can make healing potions and a magic sword that boosts strength for a short period of time. The items could be fleshed out a little more but, still, it’s an attempt. Other than these it’s just standard boring old book magic items. I really wish designers would put in more of an effort here. The new monsters are both vampire derivatives; lesser vampires of varying degrees. As “you face generic undead” opponents they could be pretty good. The party wouldn’t know what kind of undead, or perhaps even creature, they face. I always like that in a module.

Too short, too simple, and too mundane for my tastes.

1 Response to The Corrupt Crypt of Illmater