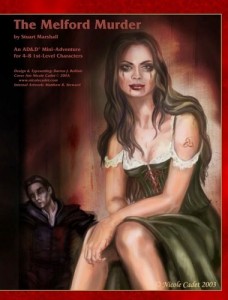 The people of the small village of Melford are stunned when one of the most prominent citizens is found dead one morning. Clues are scarce, suspects are everywhere, and the constabulary is stumped. A rich reward has been offered to anyone who can help drag the killer out of the web of shadow and intrigue they have woven around themselves.

A rare beast indeed: a murder mystery module that doesn’t suck. The players will be kicking around a small village trying to discover who killed the innkeep. It can end with the pursuit of the villain to her brothers hideout … and he’s a kind of mad scientist/necromancer guy. The village is done right, the investigation is done right. The end feels out of place. Not a bad little adventure.

D&D murder mysteries have a serious problem. ESP. Invisibility. Know Alignment. It’s hard to keep a group of PC’s off of your back if you want to engage in a bit of secret villainy. Most modules do some serious bullshitting to get by this. Amulets of mask alignment, Anti-mind reading rings, Shapechangers, etc. This adventure takes a different approach, and a much more intelligent one. It’s written for first level! None of those magical evil-finding powers are present with the party yet, most likely, and this the murderer is safe. It acknowledges the need for a lower-magic environment and looks the problem straight in the face. It’s a good solution to a bad problem and someone should have done it sooner.

It does something else many others don’t do: the villagers are written to be much more real than many modules do. Almost four pages are spent just on the NPC’s that are the suspects. They get a tony stat block in their description and then a small amount of description. Some have club feet. Some are lonely and isolated. All have something to them to help the DM run them and bring them to life. There’s also an EXCELLENT flowchart that shows how the people of the village, or at least the suspects, relate to each other. Felona tried to seduce Brad but he rejected her advanced … he’s in love with Deborah who considers herself too good for him, but she’s doing business with Ulayah and is in love with him …. and so on. This really brings the village to life. A village is about the way people interact with each other. So many modules just give he bar-keep one ear and make him surly and describe how much ale costs. That’s not what makes a good village. Just like factions are important in a megadungeon, interpersonal relationships are important in a village. It helps drive the background scene that going on around the party and make the place and the people seem more real. And provides hooks aplenty. 🙂 Really, really nice village. Did I mention one dudes a cuckold? Yeah, this village is good and saucy without being bizarre.

The murder mystery/investigation is handled on about a page and a half of easily read/laid out text. In that space you get two versions. The ‘minor’ version is for parties that hate investigations. Basically, of the party talks to everyone in the bar they should get an idea of who’s lying. Maybe. It relies on the group paying attention. Groups NEVER pay attention. The clue is not a slam dunk and only appears once. That’s not a recipe for success … but we’ll let it slide. The ‘major’ murder relies on the same information except that one ‘no-slam dunk’ clue is removed. In this version talking to people yields only the salty gossip and love affairs that also appear in the minor version. It relies entirely on a single physical clue that is not present in the minor version. A clue in a locked room that only one person has a key to. The murderer. So …. yeah. Ultimately it’s still a murder mystery module and some groups will NOT be in to it.

There’s some weird shit in this module. One of the villagers is a penanggalan. As far as I can tell, that plays no role at all in the adventure. She just is. Weird. There’s also a secret hideout that the murders deformed brother lives in outside of town while he conducts hideous experiments. It’s completely out of left field. Oh, the four rooms are creepy and weird as hell and I enjoyed it, but it just seems REALLY out of place. Dude is wearing ‘manskin armor’ and has body parts and worms crawling about his place … uh … SWEET! The several new monsters are nice as are he few new magic items. UH .. .and the manskin armor …

You could run this as written and have a pretty decent time, if your group like mysteries. I’m going to use this in a different way though. I’m going to split the “lair” from the murder. I’ll use the NPC’s in the my Moondays group inn/homebase town. Introduce them over several sessions of play and get the NPC’s and personalities integrated in to the normal background the players interact with. Then I’ll do the murder. That should be much more interesting than the “reward poster” hook presented in the module, and much more impactful since the group will has a history with the NPC’s. Plus, they are not then required to solve the mystery. They can ignore it and go on their normal dungeon-delving if they want or if they get bored. I’ll keep the penanggalan and have her do something else … start setting her up to be some kind of future hook. I’ll take the mad scientist ‘manskin’ and his lair and maybe either put him in town as a bizarro merchant or outside of town as a potential NPC, evil perhaps, that the group interacts with for sage advice, etc. He’s available for hooks in the future also as he plays with things man was not meant to know.

This is a nice adventure for low level characters. The format is good and you can plunder some good content. It does a village right.

3 Responses to SM2 – The Melford Murder