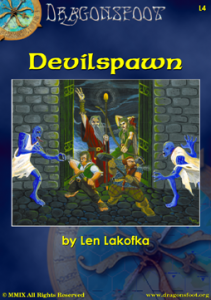 In this module the party defends a small series of villages from various mass humanoid attacks and an assassination attempt. It’s confusing, with an insane level of detail. It has a LOT of overpowered villagers and a strange vibe I can’t put my finger on. High fantasy mixed with … idiosyncratic stuff? Bits of this adventure are highly imaginative but man, you have to work to get it out.

I tend to write my reviews in a very stream of consciousness style. This module reminds me a lot of my review-writing style. My reviews are four or five paragraphs long. This module is 137 pages long. I think you can see where I’m going here. This module is in DESPERATE need of a heavy edit. It was quite hard for me to figure out what was going on, when it was going on, where it was going on, and how it all fit together. It’s just like everything was all mashed up together … maybe in the order you might need it? It’s got a HUGE amount of detail, which is pretty obvious once you consider there are only four encounters in it. (I think? After two read-throughs I’m still not sure.) At some point in my life, I don’t recall when, I owned L1. I recall trying to read it several times and just being confused. Deja-vu.

I _think_ there is a timeline of events which involve humanoids attacking villages and the players moving from village to village to protect them, combined with an assassination attempt on a nobles wife. There’s also a dungeon straight of Tower of Gygax. How/why the dungeon fits in I’m not sure. There’s also a Sword of Evil and a Mace of Destruction floating around that appear to be involved somehow in the plot. I’m pretty sure all of the attacks are being masterminded by an evil noble and his son. I have NO clue how any of this fits together or how the party is supposed to figure out where to go.

Page 1 has an introduction and a sequence of events for the module. The introduction is three paragraphs long and says, essentially, that there’s a supplemental book that contain pre-gens and calendar information and please read the module carefully. No Shit! I take back all of my bitching and moaning about long introductions and backgrounds. This thing needs at least a page that describes how all the bits fit together. The sequence of events should help but its all but useless. There are six entires. Three are background. One is “the party arrives. There is snow on the rooftops and on the dock!” WTF?!? Is that important? Is it winter? Or the middle of summer? I never did figure out why the snow was mentioned or if it was important. The last two entries are eight days apart and start jut 1 day after the party arrives. The first is that a knight leaves his town with some troops. The second, and last date is “The attacks on the village of Tellar.” The eight days in between those two events make up the adventure. Those are the eight important days for an event summary, and yet nothing is mentioned.

All of that shit in one column on page one. The second column is, perhaps, even more bizarre. The DM is told that the new party should travel to Grest based on the information provided in the introduction and if they don’t then the module is useless. Uh … there wasn’t ANYTHING about the module in the introduction … There’s some read-aloud after this advice, and some details. Maybe it means that? Nope. A tavern-keeper has breakfast with the party and tells them 37 people died and 30 more were injured, along with some details, like the names of the people who were killed, if the party asks. There’s also a long list of other people killed and buildings burned down, which refers back to L1 and/or L2, I guess, but has no other bearing on the adventure? The detail here is SO strange. It’s like … watching the Attack on Foy battle scene in Band of Brothers. You see some action. You hear some names. Oh look, a haystack. Interesting and detailed … but not really relevant to timeline of WW2. And from this the party figures out they need to go to Grest?

The next section is a day heading: Patchwell the 10th. The party leaves for Grest. The barkeep gets ready to bury some friends. Uh .. didn’t they die like 8 days earlier? Wait, I’ve got an idea. Maybe the calendar isn’t numerical like we think. Maybe its, like, logarithmic? So there are not 8 days in between events. The barkeeps friends died yesterday! Ah Ha! The Copper Rise comes in to sight. What the hell is that? Is it relevant? Fuck, I feel like I’m watching a Fellini movie without subtitles. What the fuck is going on? Who is that? Is that important? They meet some copper miners on the road with a wagon, a man and a boy. The man is a fifth level fighter and the boy is a third level fighter. No, wait, there are three people now. The 19-year old is the third level fighter and the 8 year old … *whew*, he has no levels. WTF are the copper miners doing with 8 levels of fighter between them? Uh, you do get negative experience for killing them though? Ah ha! So the party is supposed to be hero’s and this is a railroad! Got it!

The party arrives at an inn where they are interviewed by the Knight of Grest, who is on his way to the village that was attacked, with a war party. After the knight and his troop leave the next day then the inn is attacked by a hobgoblin war band 30 strong. Uh … the innkeep is a fourth level fighter and his wife is a fifth level cleric. In fact, there’s a shit ton of high level people in the town. A 7th level dwarf, another 4th level cleric. Lots of second and third level fighters … I guess the party is supposed to help out? There’s a silly level of detail. Things like “the common room has six large octagonal tables with eight chairs around three of them and six around the other three (six of the chairs need to be repaired and in the kitchen against the back wall.)” Huh? Is that meaningful? Does that somehow represent some event in the directors childhood or relate to the priests sexual thoughts and his relationship with God?

The whole inn thing is only four pages long; terse in comparison to what’s to come. The next day the party gets to Grest. There’s an event in Grest the evening of the the 12th, but it makes no sense? The module then skips to events in Grest on the 14th, an attempted assassination in castle Grest of the knights wife. “It’s the last scheduled event in the introduction.” What? This was all introduction and not the adventure? Wait … when the fuck did this become a Chech film? There’s like, 28 pages of Grest, at least. And a dungeon under ruins nearby? Uh … I don’t know why the party goes to the dungeon? It has a cool maze. Oh wait, the module is describing Grest again? So that was just, like, a 12 page sidebar stuffed in at a random spot? The villages of Teller and Cobblethorp are also described. Teller gets attacked. Cobblethorp doesn’t, but has a bad guy in it? And then the wilderness around the three towns gets described? I think you get the idea. It’s a confusing mess stuffed with strange detail.

The vibe here is very strange. All of the people in the villages seem to be very high level. There’s two tailors who are both 5th level wizards! There’s also A LOT of powerful things running around. How about an 18th level Angel shape-changed in to a halfling apple seller? His donkey is a bronze dragon. And then there’s the little girl who’s actually a polymorphed silver dragon. She gets upset if the group steals some pearls. No one helps the party, or course. Oh, and there’s like a crazy number of gods running around with a decent chance that some show up. Usually to smite a party member who’s not on the straight and narrow. It’s bizarre! It’s like the players are the only ‘normal’ people in the entire place! I don’t groove on the whole “tailor and his wife are both 5th level wizards/doorman is a 7th level fighter” type thing. Nor do I get off on the whole “punish the party for stealing and looting the good temples” or “Hahaha! puny human, do what we dragons say or else!” thing.

But there’s a whimsical side of this that’s pretty cool also. The whole “Baphumet come to visit hi old paladin buddy” and the idea that anyone/everyone is actually someone else much more powerful … that might make a cool campaign, right before your players strange you. The situations are just sooo bizarre and there’s so many of them that it ends up being some kind of High Fantasy/0e mashup done first edition style. Len like his magic items also, but he does do some work to add variety. Potions of wood rotting, daggers of blood-letting, and so on. There’s a LOT of highly imaginative content in this … if you can wade through the rest. The module is worth downloading just to read the weird color-based teleportation maze on page (40 or 42.) Six confusing and wonderful pages!

Hey, what’s up with the editing Dragonsfoot? Did you even try?