HM-2 The Hunt for Istan 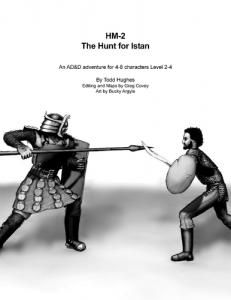 This follow-up adventure to “The Disappearance of Harold the Hedge Mage” sees the PCs return to the village of Rashtan.

Hang on here, let me copy/paste most of my (poorly done) review of Harold the Hedge Mage … Ok, not as much reuse as I had hoped.

This is a short little adventure that feels a lot like a quest you’d get in a D&D video game. A PS2 video game. It also brings a decent little bit of flavor and color. Those bits keep it from being a complete waste of time but there are better things floating around. Skip to the end for the good parts.

The party, in a small village, somehow takes it upon themselves to go find the missing asshole Ishtan. It’s totally not clear why the party give a shit, but they do. The sheriff, who the guy escaped from, certainly doesn’t seem to care. A diary (yes, a fucking diary. Talk about overuse of a trope that was crappy to begin with) in Ishtans shop directs the party where to go. On the way they they visit a Company Town, take sides in an Eagle Claw dispute, and kill a patrol. They then clear out a very simple hack-n-slash dungeon. The best parts are on the road to the dungeon.

The adventure is super simple. The wilderness wandering monster table could have come straight out of the book and is therefore probably unnecessary. There’s a rumor table; can’t have an OSR adventure without a rumor table. It struck me today that, while the rymor table was nothing special, you could use rumor tables to kind of flesh out villages. A false rumor about the priest being in league with Orcus? Then something must be going on; somebody hates the priest for some reason, legitimate or otherwise, or hte priest is doing something strange. That kind of thing. In which case I’ve been giving most villages, at least those with rumor tables, a bad rap. The whole adventure is rife with read-aloud text, but it’s REALLY quaint read-aloud text. All of the shops have a little bit and they all end with the shopkeep saying “How can I help you?”And it’s still read-aloud text and it still sucks. Ich liebes du nicht Du liebes me nicht. Da Da Da.

The mine map is super simple also. The mines have a simple branching layout with most of the rooms just having some humanoids in them waiting to attack and/or get slaughtered. A LOT of humanoids. We’re talking Caves of Chaos orc caves here, at least. It reminds me a lot of the orcs caves in B2 … if there was read-aloud in every room and no orc babies to kill. IE: boring. Just a straight up hack in rooms that have nothing else going on. Boring. VERY boring. At least most of the read-aloud is very short. In fact, it’s almost written like younger players were GM’ing and playing.

There are some good parts here. There’s an enemy encampment in which the party can collapse a cliffside on to most of them. That’s some nice terrain involvement. There’s also a good encounter with two giant eagles attacking a hill giant and ogre who were trying to have their eggs for breakfast. The giant is yelling for HELP, which is what brings their attention to the party. The encounter is written to assume that the party helps the eagles, but the eagles give no boon if the party does so. It would be MUCH cooler if the party helped the giant/ogre! That would be AWESOME! You might even get a hill giant or ogre ally, which is going to be more useful in a dungeon and a lot more fun overall then a couple of eagles who telepathically say “thank you” and fly off. That’s fucking lame. The least they could do is let the party ride them. Gwaihir is supposed to be cool, not a jerk.

Finally there is the Company Town the party comes to in their first day of travel. It’s a quarry town with everyone essentially in debt to the quarry owner. He sets the party up to get killed by ogres and it’s assumed the party comes back to deal with him. The owner ends up groveling before the party and as the group leaves they see a mob of villagers/workers rioting in the village, looting the company tavern and beating its barkeep. Then they come up the hill to the owners manse in full on mob/torches/pitchfork mode. It’s the best village mob scene I’ve ever seen. The writing is tight and evocative and feels right. This sort of actions/consequences thing is also something tat rarely gets covered in modules. There was something similar in my recent review of Har’s Point: the party solves the immediate problem but probably not the larger issue and then the village suffers for it. In that case it’s offered as an off-stage epilogue and in this case the party is witness to what is about to happen as they are leaving. This is VERY good stuff.
After all is said and done it was right for you to run.