HM-1 The Disappearance of Harold the Hedge Mage 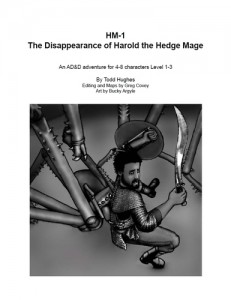 The hamlet of Rashtan is missing it’s Hedge Mage. Can the PC’s track him down?

This is a short little adventure in a house and mine that feels a lot like a quest you’d get in a D&D video game. A PS2 video game. It also brings a decent little bit of flavor and color. Those bits keep it from being a complete waste of time but there are better things floating around.

Bob Herzog and I have something in common. In my Monday ‘Uh … are we sure this is a zombie apocalypse?’ game my 42 year old overweight lazy suburban housewife has executed 2 cops with shots to the head for mouthing off to her. Susan don’t take no shit from NPC’s.

The players come in to a town and the 1/2 orc barkeep tells them about his buddy, Harold the Hedge Mage, who he hasn’t seen in awhile. He, and Harolds niece, ask the party to go check on him. He lives a day away. He’ll give you 50gp each. The barkeep can’t be bothered to check on his buddy personally though because … I don’t know, maybe this is like Brewsters Millions and he has to get rid of all his money or something. The sheriff was informed but he can’t check on Harold either. You see there’s this magic line outside the village that the sheriff can’t cross or he turns in to  pile of poo. No, wait, tat’s not it. Oh, right: the sheriff can’t go BECAUSE. Why even put a sheriff in? Why raise the issue? Who knows. Anyway the group goes to Harolds house which is some kind of mansion out in the woods even though it’s a day outside of town and monsters prowl the woods. Inside they party finds .. monsters! Killing them leads the party to an old mine where they find more monsters. After killing a bunch of orcs and hobgoblins the party finds out that someone sold out Harold, a rival, but there’s no sign of Harold. Going back to the village the group finds Harold in the tavern talking to the barkeep and his niece. It turns out he went off to town for a few weeks. Then Susan knifed him in the throat and used his wand to shove it through the barkeeps ocular window and grabbed the niece by the hair and slapped her repeatedly while shouting “WHO THE FUCK IS MISSING NOW BITCH!” … Susan don’t take no shit from NPC’s.

The adventure is super simple. The wandering monster table could have come straight out of the book and is therefore probably unnecessary. There’s a rumor table; can’t have an OSR adventure without a rumor table. The whole adventure is rife with read-aloud text, but it’s REALLY quaint read-aloud text. All of the shops have a little bit and they all end with the shopkeep saying “How can I help you?”And it’s still read-aloud text and it still sucks. Ich liebes du nicht Du liebes me nicht. Da Da Da. There’s a really nice little bit in the village about a rival potion maker and the names he gives his potions and what they look and taste like. It’s PERFECT for what it’s describing. It adds that touch of flavor that should really make it stand out in the players minds.

The house and mine maps are super simple also. They house is just a bunch of looted rooms with some orcs in the basement waiting in ambush while the mines have a simple branching layout with most of the rooms just having some humanoids in them waiting to attack and/or get slaughtered. A LOT of humanoids. We’re talking Caves of Chaos orc caves here, at least. Two of the encounters stand out. One is an encounter with a next of stirges. In their room is the dried out and desiccated body of an orc. Yes, that qualifies as ‘Standing Out’ in this adventure. The second is  hole in the wall of a rom that leads to large cave with a 9-headed hydra in it. WHAT?!?!?! Oh yeah! Now the adventures getting interesting! Come on! Gimme more More MORE! Alas, there is no more. The hydra doesn’t even have anything cool, just some coins. Still, I like the imagery of a hole broken through a wall that you crawl through to find a large cave … with a hydra in it! THAT’S a classic D&D moment. The adventure needs more like it. It reminds me a lot of the orcs caves in B2 … if there was read-aloud in every room and no orc babies to kill. IE: boring. Just a straight up hack in rooms that have nothing else going on.

There are a couple of decent magic items. A ring that lets you hit monsters that can only be hit by +1 weapons and some homebrew healing potions. Again, I REALLY like the whole potion thing that’s going on in this adventure. “Ishta’s Wondrous Elixer tastes like dirt, because it has dirt in it, and you have to make a con check or retch and vomit. It heals 1hp. 🙂

After all is said and done it was right for you to run.

These super-short Dragonsfoot adventurers are starting to get to me.