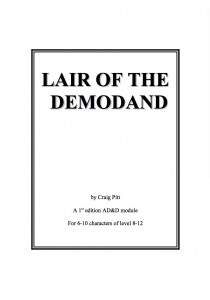 Can your group of trusty adventurers save a small village from a monstrous evil? For 6-10 characters of level 8-12.

Think hard: Have you ever actually _seen_ a Monty Haul adventure? Well, you have now. This thing has … issues.

The adventure starts with statement from the designer to the effect that limited-use magic items should be the norm in a campaign. Potions, scrolls, charges in a wand, etc. Things that get used up. I was happy to see that statement, it matches my own views. Unfortunately he then follows this statement with an adventure that contains a complete set of ioun stones, helm of telepathy, ring of mind shielding, gauntlets of ogre power, boots of striding/springing, crossbow of speed, collar of stiffness, rod of absorption, bag of holding, sword of dancing, amulet of 30% magic resistance, ring of x-ray vision, robe of the archmagi and a +1 dagger. And that doesn’t count the more standard limited use magic items like arrows of demon slaying, rods of cancellation, a ring of four wishes, a complete set of books (vile darkness, exalted deeds, understanding, quickness/action, clear thought, bodily health, etc) amulet of life protection, and javelins of lightning. And then there’s all of the portions and scrolls on top of that. Because, you know, most magic items should be consumable. Like the blaster rifles in Barrier Peaks.

The set up is painful. Monsters are attacking a village and the king has sent you to take care of it, his army being otherwise engaged on the border. He gives you 100gp each. Whatever happened to rumors of PHAT L00T and hot elf chicks? Anyway, the party will be exploring the complex of a dead archmage who was killed by a summoned demodand. The dungeon is full of the archmages minions. The demodand hasn’t killed them yet because he’s afraid of triggering some kind of containment trap that might be present.

The dungeon layout is simple, just a set of branching hallways that dead-end in rooms. There are 22 rooms/encounters (yeah, all those items are in just 22 rooms. And there’s more, I just got bored typing.) There’s only one wandering monster, a Penanggalan, that attacks at night if the players camp outside.

Every room has a monster and just about every room is stuffed full of treasure. Black puddings, white puddings, cyclopskin, achaierai, arcanadaemon, shadow mastiffs, thessalhydra, scarecrows, the penanggalan, an enveloper, protein polymorph, vision, stone golems, the demodand, ghost … all living together in perfect harmony, ignoring each other and just hanging out in their rooms. The hydra and shadow mastiffs are such good buds that they left the hydra wander through their room so he can get out and eat. Look, I don’t need realism. In fact, I HATE realism. I do however need more than a series of simple rooms on a map and list of random monsters tied together with “they all worked for the archmage.” There’s more to this dungeon than my vitriol would imply, however that’s not what it feels like and certainly lacks the … imagination? that I’m looking for in a product.

There’s a hallway cloaked in continual darkness with a brown pudding on the ceiling. The aranadaemon is trapped in the last 20′ of a corridor. At the end of a corridor is large ruby on a pedestal, which triggers a poison gas trap (a classic trop worth stealing.) Let’s see, there’s a green slime trap, a deva trapped in stasis, a nice obvious pit trap, a couple of fake traps and a “burning the spider webs triggers a Power Word Kill” trap. You now have experienced the module. There’s just not much exciting or interesting in this place. Text is wasted on history and explanations instead of evocative imagery or interesting things. The monsters are book monsters thrown together seemingly randomly. The magic items are too many, too powerful, and are all generic and boring book items, with a single exception (a Rod of the Rust Monster.) The map is simple, the rooms are boring, and text uninspired.

1 Response to Lair of the Demodand