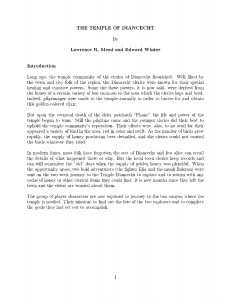 A very basic kind of adventure, this has a couple of nice ideas however for the most part it seems like a mash-up of several disconnected elements. Things thrown together with tenuous ties and without much interesting content. There are a couple of interesting bits to steal though.

The characters are asked to go discover the fate of two local explorers who were sent off to find some of the healing relics at a temple that is now disused. The temple once used bee honey to make magic healing items but fell in to disuse and is now the base for an evil illusionist and his minions. I actually kind of like the set up on this one. The background, while a page long, isn’t too overwrought and the temple/bee honey/disuse thing makes enough sense to be a good pretext without drowning in detail. It does rely on the party being do-gooders AND the party is a little high in levels to be helping out lowly villagers, but I’m going to ignore that in favor of being a hypocrite. Err … I mean, “there’s no accounting for taste.” The temple is two weeks away through the wilderness (which I like, nice and remote without being absurd) however there’s no notes about the wilderness journey. The maps are nothing special. Both the upper floor of the temple and the catacombs beneath are a kind of branching hallway design: imagine a long hallway with side corridors and doors found along it for the catacombs while the upper floor is just a series of interconnected rooms. There’s a token wandering monster table made up of about two unique creatures found in the dungeon.

Most of the encounters are nothing too special. Empty rooms and rooms with some kind of generic book monster. Minotaur, Ogres, Mummy, Lamia, Medusa. A couple of the encounters do stand out. There’s a charmed treant who can cause sticks to snakes. The imagery of him causing the trees to drop dead branches and then snaking them is a good one. There’s also a poor apprentice who was the victim of a wand of wonder. He’s now 2 feet tall and looks like a bush and still wields the wand. Those are pretty good encounters; nice and imaginative and not just a monster from a book. There’s also a nice encounter with a room full of rats bursting through a door. Again, nice and evocative and gives me enough information to run with it. The others are … not so interesting. A medusa and her charmed minion. (I guess her lover never looks at her?) Lizard-men in ambush and Lamia just hanging out. The eighteen encounters/rooms just don’t have enough interesting going on to make this an adventure worth pursuing. And the lizard man thing just doesn’t make sense at all: they block the illusionist in the dungeon from his lover upstairs … and neither of them give a shit?

There is a flying rust monster bird that’s provided which is quite nasty. There is also a decent amount of variety in both the mundane and magical treasure. That’s not really enough though. Many of the monsters in the adventure have illusion powers and I’m sure that’s meant to kind of beef the place up, but that’s just not enough. There’s no real exploration element and most of the rooms have just-another-monster syndrome or are meaningless. It feels a little like the players are running the gauntlet, however in reality they just need to follow one long corridor to the end, open the door and kill the Big Bad. A Big Bad which has Lareth syndrome: there’s no build up to him at all. The players just run in to him and hack him down, not knowing that he’s the guy behind everything. There needs to be some build up to him and that’s just not present.