The Monastery of the Order of Crimson Monks 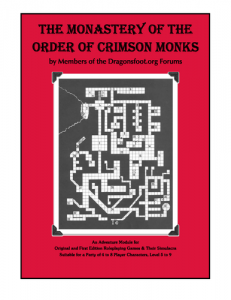 This is a free module from Dragonsfoot. It was a community project to fill out the sample dungeon from the 1E DMG. They’ve done a good job of filling the map with encounters that are interesting and fun.

This sample dungeon appears a couple of times in the 1E DMG. The first three rooms get a description (the skeleton in the stream with the scroll tube, etc) and then there’s spiders that drops down and gets stamped on by a boot in the play example. A group on Dragonsfoot has kept the map and first three rooms and filled in the rest of the encounters in a community project. They did a great job.

There is, essentially, no introduction at all. Just a brief four sentence explanation that it’s a community project and a couple of small “please don’t sue us for using the map and first three rooms” statements. The product then launches in to the wandering monster tables and the first three rooms, as they appeared in the DMG. The entire story of this place is told through the encounters and it works GREAT. I was a bit taken aback at having no introduction/background at all but you seriously don’t need one. Either the guys doing the rooms did an amazing job or Vlark, the compiler/editor, should get an award for putting it together … or maybe there was just some monkeys @ typewriters thing going on and it just happened. An example? Ok. One of the wandering monster tables has goblins on it. “Ug” I say to myself upon seeing this. I hate humanoids and they appear to be seriously out of place in this dungeon. My feeling just gets worse as I read through: “Why did the goblins leave the dead guys treasure there? Why is that? Doesn’t make sense!” IE: the kind of nit-picky stuff that you think about when something gets caught in your head. And then I ran in to a brief paragraph way down deeper in the dungeon: “Since then, the dungeon has been mostly inhabited by various goblinoids every now and then. They barely avoid the many undead residing in it, yet stay here as the undead dissuade other monsters to invade the place.” It makes perfect sense and easily explains the goblins on the table: they are explorers, maybe looking for their kin or just having heard this was an ok place to set up camp. Two great things have happened there. First, a bunch of extra nonsense background/introduction section was avoided and the story of the dungeon told naturally through the encounters. Second, the module gave me enough information to get my own imagination working, letting me fill in the details of the adventure, without burdening me with a lot of extra bullshit detail. Those both hit my targets almost exactly for what I’m looking for in a product.

The maps a pretty good with multiple loops and several ways down to deeper levels. There may be five or six different way on to or off of the level … and that’s in a only forty or so encounters on a level that does NOT fill the page completely. Lots of weird room shapes, good secret placement, concealed doors, multiple ways in and out of place. I heartily approve. There are LOTS of options for the players as they explore the map. Good map complexity allows for complications, exploration, and mystery. No linearity here! It should be noted that the map has two distinct sections, with only one way, a tough secret door, between them. I was worried about when looking through this, only to have my worry addressed: there’s a good clue in the accessible half that the door is there.

The encounters in this are generally pretty good. The rooms have a decent amount going on in them and they provide some good ideas for the DM to flesh out. I particularly liked the underground tunnel filled with water. Yeah, I know it’s not that uncommon. I don’t know, it struck me as pretty cool the way it was presented. Several of the encounters are triggered, which I appreciated as well. On one room there’s a goblin body nailed to a door. Looking closely at it reveals two small red lights burning in its eyesockets. Ought oh! Touching it draws a wraith out of the skull! That’s the kind of encounter I can really groove on. It’s a pretty good bit of flavor text, short and evocative. It also rewards observant play and should almost CERTAINLY freak the players out before they trigger it. I LOVE it when the players get freaked out! There are a couple of other similar encounters as well. Almost every room has some little effect or something to explore or poke at. I approve. There are also a couple of little vignettes present in rooms. These are little scenes that give the impression that the dungeon is a real, breathing place. Two priests having an argument. A group of dead adventurers who have crawled in to a corner to die, along with the evidence that they were there. I love these sorts of things and I think they help a lot in turning static words on a page in to a place that seems real without unnecessary and burdensome realism getting in the way. There are also some great curses: pains in the ass without being crippling. This is combined with several other interesting effects the party can trigger in the dungeon. I love that sort of thing; I really find it brings the mystery and wonder to a game without being arbitrary.

This dungeon seems FULL of things to talk to. I don’t think it actually is, but it seems like it is. That’s probably a good thing. There’s an NPC party, a demon and a Crypt Thing, all of whom can offer some opportunities to break up the exploration & hacking. The monsters are the unusual suspects of skeletons, vermin, ghouls, wraiths, EHP, etc. It’s a good classic mix and they don’t feel stale at all. There’s three of four new magic items detailed that I was happy to see had proper backgrounds, etc. There’s also a couple of examples of things like “3/4 full yellow-green potion of invisibility” and so on. A little more variety in this area with the other book items would have been appreciated.

There is a bit too much detail in some places. We’re not talking 3e or 2e levels, but there _is_ an issue with verbosity. ROoms sometimes have three paragraphs or so describing them, which makes it possible to only fit three or four to page. Combined with the generous margins, line spacing, and font size it means it’s hard to get a good handle on the room quickly in many cases. A little tighter editing would have been in order, although I suspect there’s a fine line there especially in a community product. It does feel a little generic, or maybe I mean “not themed”, I’m not sure. The rooms have a lot going on but it feels like Just Another Dungeon Crawl. Hmmm, maybe I mean it wears the trappings of Just Another Dungeon Crawl. We’ve all seen a hundred of those poorly done generic dungeon crawls that all seem to look alike and run together in your mind. This adventure looks a bit like that on the surface and so perhaps that’s where the feeling comes from. But it’s not. It’s full of great encounters.

I’m pretty happy with this one. It’s not going to win any awards but it is a solid product and better than the vast majority of product, free or otherwise.

5 Responses to The Monastery of the Order of Crimson Monks