J1 – The Beast of Geshtein 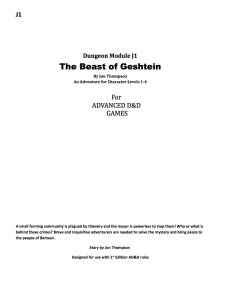 A small farming community is plagued by thievery and the mayor is powerless to stop them! Who or what is behind these crimes? Brave and inquisitive adventurers are needed to solve the mystery and bring peace to the people of Bemuen.

A free adventure hosted on Dragonsfoot. Different standards for free adventures? Nahhhh…. The adventure is a mess but the DM can get the gist of what’s going on pretty easily. The details though, or rather, the flavor, are generally missing. It’s more of an adventure outline, even though it’s 35 pages long.

The idea is that there’s a small village (~150) being plagued by a dragon eating their livestock. The mayor hires the party to go look in to it. The players will poke around town, go up the mountain to confront a depressed dragon, and then come back to town to finish things up. There’s on fixed combat encounter on the way to the dragons lair as well as a single ‘team building’ challenge: crossing a chasm. The chasm encounter has a lot of details on various solutions the players might try and the combat encounter is just with goblins. Goblins with a shit-ton of magic items, but goblins nonetheless. There is a small wandering monster table. They are heavy on the Animal side, which I like, but do include goblins, ogres, and bugbears … a little scattershot.

While the module comes in at 35 pages it is frustrating in its lack of supporting text. The dragon is depressed because his lost love, a human woman, has gone missing. He’d like the party to give him some closure and let him know what has happened to her. There’s almost no data on her though. The innkeepers daughter looks a lot like her. And her dead body lies at the bottom of a chasm several hundred yards downstream. She’s just bones now with a locket. How the party figures out to look here is a mystery, as is any reason why she’s down at the bottom. I THINK it’s implied she took her own life, mostly because of this statement: “Crafty players will realize that Ashara chose her own fate long ago once it is revealed that the rope bridge was destroyed along with the mercenaries.” I have NO idea how that conclusion was arrived at; there’s nothing to support it.

Two thirds of the adventure revolves around the village but there’s really not much detail provided. The mayor, who’s an evil shit, hires the party to look in to a cover-up he’s got going on (dragon eating the livestock) but it’s not clear why he does this. Maybe he’s getting heat from the townspeople? He’s supposed to provide several people who have lost livestock to the dragon but only two are provided, a fake one and a real one. From this the party is supposed to figure out that the mayor is not on the up and up. Tenuous, at best. If the party believes the depressed dragon (his assertion that he’s not been eating livestock) then they must suspect the mayor. Somehow this justifies breaking in to his house and the town hall to look for evidence, poking around the village for more, and then summoning the town council to have the mayor fired. There’s a lot of implied social elements going on here and almost no text to support it. Most of the town locations are pretty generic, with a single fun exception I’m going to steal. There’s no real interaction among the villagers; they are just static locations who don’t really interact with each other or who have interesting personalities for the party to play off of. The village also only has a couple of locations detailed, maybe eight, with only a couple of people detailed. That’s not enough to support the social game that the module needs to revolve around.

Turning this in to a useful adventure is going to involve beefing up the village play quite a bit. The “evil dragon is really good” thing is a bit stale and I suspect the players will know something is up when you toss a dragon at them at first level. I’m not sure how you would drop the hints about the dragons lost Lenore. Sticking this in as a subplot to one of your existing villages might be interesting. That solves the ‘Living Breathing Village’ problem, and then maybe also you can throw in some clues ahead of time about the fate of Lenore.