Shadow of the Haunted Keep 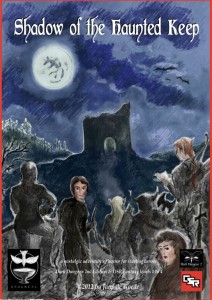 On a summer eve with a near full moon, you, your friends and some family have gathered in a sacred forest grove to celebrate the coming harvest. Enjoying song, stories and dance, you are suddenly rudely interupted. Guttural voices, shouts and screams. A horde ofwolves pours out from between the trees. On their backs are gruesome little men, armed with spears and jagged swords.

This is the strangest thing I’ve ever reviewed. It’s a kind of story-based adventure, stat’d for both OSR games and Dark Dungeon. Don’t pre-judge this one: read the entire review, especially if you hate story games.

Some D&D adventures, such as DL1 and Ravenloft, added story elements to classic D&D module elements. In other words, they started out using a traditional D&D adventure thing and then added story elements. These eventually turned in to the more story and plot based adventures that replace traditional site-based adventurers. This product is similar but comes at things from the other side. It seems to be clearly based on the concepts of the modern indie storytelling game and then adds elements of traditional D&D. The indie game Shab-al-Hiri Roach has set scenes and the players create a story out of those scenes, but every game will always have the same settings for the scenes. A similar concept is at play in this module … I think. My heads spinning a bit from the very non-traditional style.

The story has four chapters, each with at least one scene and several options. I know! Like I said, it’s coming at this thing from the story games side of the world. Scene 1: the players are having a picnic in the sacred grove with some friends and family when goblin wolf-riders attack. Naturally the heroes are to overwhelmed by the enemy. That’s a direct quote. ‘Toss enough goblins at them to distract them enough so that their families can be kidnapped.’ If the players play very well as team, and roll very well then their relatives don’t get kidnapped! Yeah! But then you go to scene 2 and the characters village was attacked and burned own and people were captured there. Yeah? Oh wait, story game, so, choices don’t matter. Scene 3 has the players chasing the goblins through a forest “Traversing the forest in the dark is excellent for scary scenes, even with just an owl flying over their heads.” That’s pretty much scene 3. No advice on what those scary scenes might be. If the party moves fast or, if they move slow then there may be a party of sentries left at the old stone bridge. The bridge may be broken. The sentries on the other side may shoot their bows. Or the bridge may be in order. ARG! STORY GAME! STORY GAME! Those are pretty much direct quotes from the paragraph that composes Optional Scene 5. The adventure continues on and on like this. An optional Old Chapel. An optional ghoul back under the old chapel. Or maybe Ghoul tunnels underneath that link up with wererats.

Chapter two is about The Haunted Keep. It, and the lower caves that make up chapter three, are some of the strangest things I’ve ever seen. It’s like a bizarro dungeon crawl. There’s maps and the rooms/areas are numbered. But those are completely unaddressed in the adventure. Instead we’re given a whole slew of options. Option 9A: some rooms may be unused by the goblins for various reason. One might house a giant spider. Option 9B: another room may be unused because of scary faces on the walls. Option 9C: Maybe a room is unused because of horrible green moldy slime. So there’s not really much direction given other that the last scene/encounter in this part should be with hobgoblins that have ONE of the players captured relatives. Chapter three details the tunnels and caverns under the keep and is more of the bizarro same. Oh, and there’s a dragon in a chasm that a bridge crosses. That’s actually a pretty cool thing to steal, especially in such a low level adventure. The final chapter is with a deranged family that lives underground. They have a lot of secrets and are probably evil. ‘Probably’ because this is a story game and the DM goes with the flow. Mad scientists, cannibal banquets, etc. This is a very opened section is a very open ended adventure. Descriptions of the family are offered, as well as a set of motivations “or not” for each, and then some other general plot possibilities … “or not”. Things are supposed to end up with some portion of the party captured so the mad scientists can gloat over them. The core setup is a good one and I suspect I’ll steal it for one of my games. But without all of the railroady bits.

It’s almost like this is an adventure construction toolkit that you can use to make your own module… except it’s very clearly scene based. Almost kind of like B1 but approaching it from the story-game side of things. It does have a nice encounter here or there, like the dragon in the chasm under the bridge. It also has a nice little section at the end on continuing the adventure through several seeds founds in the plot and another good section on how to twist the adventure in some serious ways. This could be something like the family being vassals of the goblins and other pretty substantial changes to the situation. Being a story-game it also has an EXCELLENT section on magic items. I’s a section at the end and the DM is encouraged to pick and choose items to add as loot to the various encounters. The items though are pretty good and have nice fairy-tale feel to them, compete with a little description. A Dagger of Returning, a Potion of Transformations, a Sword of Wolfslaying, Blood of Curing, Stench of the Spider, Rags of the Shadow … These are the sorts of magic items that stand out in a campaign and that players will remember. These are exactly the sorts of magic items that I wish more designers would put in … items with character. The Stench comes in a small perfume dispenser and reeks sour … but using it will make spiders of all sorts ignore the person unless they attack first. That’s a good item. All of the other items have similar good descriptions and powers.

The adventure is an extreme railroad. The players don’t get to have their own experiences but instead they get experiences forced upon them because the designer or DM wants them to have it. “Getting captured is a classic element” or “Rescuing their relatives would be fun.” This is pretty anti-thetical to site-based adventurers. I prefer it when we’re all sitting around the table laughing and high-fiving because of something the players have done rather than yet another session of having experiences forced upon them. D&D should not be a spectator sport.

I hate this as an adventure but certain parts of it have some GREAT ideas. It could almost be used a mini-campaign kit, a kind of adventure seed toolkit all built around the same little sandbox area. The DM could take the ideas here and flesh them out and have a nice little starting area and beginning campaign area. The family part, especially, I find very intriguing, as well as the magic items. I don’t keep much of what I review, especially when it comes to PDF’s, but I’m going to keep this one just because it’s so bizarrely different. This thing is only $1.99 on rpgnow. Even if you hate plot and story you may want to check it out; I’m pretty sure it’s the strangest thing I’ve ever come across.

Oh, and if you’re playing one of those Indie/story dungeon games then this would be a MUST BUY.

4 Responses to Shadow of the Haunted Keep