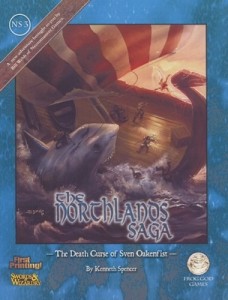 In the Northlands the laws of hospitality are absolute, to violate them is to seek dishonor or even death. What then must our heroes do when their host asks them to fulfill his dying wish, to face down the wight of the legendary viking Sven Oakenfist and convince him to lift a curse laid with his own last breath?

A pseudo-historical viking adventure, except with some D&D monsters thrown in. It has an EPIC feel. Not the 4e kind but rather of the Greek/Homer kind. I’m unnaturally attracted to these sorts of things, so be warned. It’s a pretty open concept wilderness adventure.

Sven Oakenfist is an asshole. Seriously, he is. Err… was. Err … is? Yeah, so, he’s out one day with the boys raping and pillaging a dirt-poor village full of women and children when some kid pig-herder stabs him in the back and kills him. Sven, jerk that he is, uses his last breath to curse the kid with a lifetime of good fortune … until he comes back from the grave to kill him. Come on Sven … uncool dude. Almost certainly totally in character for you since you were pretty much a dick your entire life, but still, uncool. The swineherd grows up to be a great Jarl. The party is feasting in his hall one night when the front doors crash open and the spectre of Sven appears, all ghost like and shit, and tell the Jarl that his days are numbered and he’ll be back at the spring feast to kill the Jarl, everyone in his hall, burn the place down, and kick his goldfish … and then disappears in to mists. Rought Roh Raggy! Whoever will save the Jarl?!?!!

The adventure proper is not very long. Except … it is. There are three people, the daughters of the Norns, that the party can visit, and then they can go visit ol poopy-head Sven in his barrow and kill the shit. The Norn visits are optional. Kind of. Unknown to the party, the more of them you visit the weaker Undead Sven will be when the party goes a-hacking. If they charge right off then he’s 18HD and will swallow their souls. He can be weakened to 7, 4, or 3 HD. The party can also learn, through those same Norn visits, that recreating his murder will help defeat him. As in ‘using the same spear that killed him the first time.’ This goes as far as ‘having the Jarl use the spear to stab him in the back’, which auto-kills the Big Bad. The barrow has only a couple of chambers in it, 3 or 4, and the Norm visits have only a couple of sub-tasks in them, so not a super-long adventure. Except, while the barrow is only 10 miles from the Jarls longhouse the Norms are a couple of weeks ship travel apart. This then is the meat of the adventure. Each day there’s a wandering monster check. These are contained on two-pages in the back of the book and are really well done. The designer has chosen monsters well and has given them a kind of scandinavian bend to some of them. I suspect, though, that there is not enough variety in the sea encounters. A storm and 3 monsters is going to make for a lot of giant octopi attacks..

The adventurer has a couple of problems. First, it’s very strongly mythic and scandinavian. A lower-magic or human-centric game would have no trouble substituting the vikings for someone else but it’s going to take some effort to come up with the classic travel/environments presented: they are strongly scandinavian. Human-centric and low-magic games appeal to me, maybe because of the more epic feel and classic elements like norns, witches, hags and the like.

My second issue is with the start of the adventure. The module wants each party member to make up to six stat checks in INT, WIS, and CHR. If someone succeeds in four INT checks then the party will get the information they need to find one of the Norn daughters. That’s absolutely critical. If the party charges off to the barrow then the wight is 18HD and the party is going to die. The whole thing is set up so that they will visit the Norns but this relies on that INT check being made at least four times by someone in the group. Spreading some cash around and talking the elders will get you a reroll of a check. That’s not enough. The adventure relies on the party discovering the norns exist and where they are located. I don’t mind killing people but this seems more like a bait and kill and/or ‘guess what the designer wants us to do’ syndrome. Not quite a plot but very close to it. The solution is to ignore it and let feed the party the information through roleplaying. Most importantly they need to figure out the wight is a creature of power and they are doomed if they simply confront it. That should get Norns talk going with the community. (Which isn’t really described, but there is enough BRIEF information about the Jarls house to get a good feel of things and get the DM going on some people to talk to.)

So, VERY Nordic. Very Mythic. Fixable. Strong wilderness elements that may need a little extra help. Nice if you’re in to this sort of thing.

1 Response to NS3 – The Death Curse of Sven Oakenfist