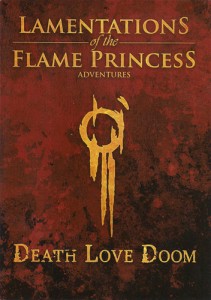 Love inspired the gift. The gift kills. Death by love.

This thing has a lot of VERY graphic imagery in it. It’s more appropriate for a horror campaign … as opposed to sitting around with your pals drinking, laughing and killing shit. Then again, maybe you like to sit around and drink and laugh while exploring emo Forge crap.

Things start out well enough: The players overhear some people talking. Rumor has it that a wealthy estate just outside town has been abandoned. A gang of thieves is organizing to hit it tomorrow night … That is a GREAT hook. There’s loot and we need it before someone else does! It’s relatable and should motivate the players well to get their asses going TONIGHT in order to hit the place. This is combined with a great little rumor table section. There’s only about twelve entries but it’s very well done.

The adventure takes place on an estate. Besides the grounds and the main house there are also a couple of outbuildings. There might be just over 30 locations in total, with 23 or so being in the main house. The room descriptions could be laid out a bit better. There’s generally some combination of a normal description, treasure, the occupant, and the freaky shit in it. It’s presented as a text block but could be laid out a bit better to make referencing the room better during play.

As with most Raggi adventures the goal is to get in, grab as much treasure as possible, and not die. To that point: there are four main enemies and a possible horde of undead. The four enemies are mobile and there’s a chart to determine which part of the estate they start in, although no real direction on how/when they move about. I’d probably just let the dice fall where they may and leave them in their location until they potentially chase the party. That’s pretty much the adventure. Avoid/fight the four baddies while trying to find as much loot as possible in a four story townhouse. Oh, and the grounds and house are filled with gore and abominations.

Yes, we can’t forget to mention that; it’s the main point of the adventure. As the party explores they are going to be witness to some scenes of unbelievable mutilation and gore. If the party explores the grounds first, maybe casing the house, then there will be a slow build up. Lots of blood, mutilated bodies, etc, all appearing kind of out of nowhere. By this I mean, for example, that everything appears normal UNTIL you stumble over the body/gore/etc. It’s a juxtaposition, see? The gore gets more bizarre and more graphic in the main house. One of the enemies is a naked man that shoots black goo from his cock. Another is a naked old woman who has replaced her nipples with her eyes and keeps her weapons in her vagina. Oh, and then there’s the naked woman who’s miscarried/undead fetus drags her around by the umbilical cord. Besides these wonders there are also a nice assortment of dead bodies mutilated in interesting ways and a couple of people who are still alive but horribly mutilated … usually with their intestines hanging out.

Raggi claims he put the most whacked out shit he could in the module as a kind of statement. What kind of person are you, Mr PC, that endures witnessing/encountering all of this stuff just in order to get a little cash? He also offers advice to the DM: keep everything bland and normal with your descriptions of the gore, etc. Until a living victim is met, and then really play up the agony, etc. Keep a straight face, don’t show emotion. EVen if the players are joking around then maintain a somber mood in order to bring them down. Wonderful; a module as performance art.

Once upon a time I used the CoC adventure “Loves Children Lost” from The Stars are Right for a Lacuna game. It’s a Call of Cthulhu adventure that deals with drug abuse, incest, child abuse, porn, and a whole bunch of other fun shit. It worked great, almost unchanged, as an adventure set in humanities shared subconscious. Death Love Doom would work well for that also, or any horror type game. It’s very graphic and explores the very nature of what it means to be a murder-hobo. You go somewhere to rob people, and perhaps kill them, and in return you’re willing to put up with all of the horrible things in this adventure in order to profit. As subtle as a hammer to the head. Of course, I don’t play fucking emo Forge games. I’m not particularly interested in exploring the nature of mans inhumanity to man or the depths to which a person will go in order to liberate a few coppers for power/XP. I could see lifting some bits of this for a fantasy game: the hook, the monsters, etc, but taken as a whole product this just isn’t D&D. It’s Forge or maybe hardcore modern CoC.