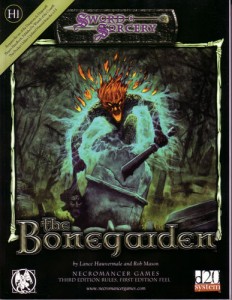 The Bonegarden is a small nation ruled by the dead, a circular cemetery 1 mile in diameter, surrounded by a magical containment field that keeps its denizens from spilling into the innocent world beyond. Within the gate lies one of the true blights of the Domain of Hawkmoon, an immense graveyard that serves as the prison for the doomed spirits of thousands of history’s most awful criminals. Those inside are determined to escape, and one of them may have found a way…

I wonder if there are any 3e adventurers that don’t suffer from verbal diarrhea? This adventure/setting is set in a giant graveyard and is full of factions, adventure seeds, and GREAT set ups. Unfortunately the adventure is buried under TONS of text.

Graveyard. One mile in diameter. Giant invisible one-way force field around it; you can get it but nothing inside can get out. It’s chock full of undead. Who come back to life each night if slain during the day. Just about everybody inside, living and dead, wants to get out and has a different plan for doing so. In most cases this puts them in contention with others inside the graveyard. Fun ensues. This more closely resembles a setting than it does an adventure. But it’s not generic or unimaginative the way many are. It instead is a kind of graveyard sandbox in which you can place something the players are seeking.

The graveyard has about seventeen locations scattered throughout. These can be roughly divided in to two categories: factions headquarters and weird stuff. The weird stuff is, essentially, a non-faction encounter area. The Windmill of Woe or the Hangman’s Tree or the Plague Bog … these are all nice little evocative locations. The Plague Bog is a low point in the graveyard where all of the blood, ooze, effluent, and other horrid substances collect. Quite a nice little fetid image there. Floating in it you can see a log with one arm hanging on to it, the rest under ‘water.’ Valley of Bones. Mass Graves. Revenge Lane. The Unquiet Garden. Just the names alone get my mind going and my creative juices flowing. (In to the plague bog, no doubt.) That’s EXACTLY what I’m looking for in an adventure. I need it to provide me just enough evocative information to get my mind going so I can do the rest. This product, however, does not do that. It goes completely overboard in the descriptions is provides. The locations all seem to take up at least a page each. What is was used for. Who lived thee. Who used it. What they did there. What happened to them. What’s happening now. The price of tea in china. The descriptions are just WAY too long. What ends up happening is that you can’t find the information you need/want in order to run it. Taking a shit ton of time and a highlighter to the text is going to be an absolute requirement. And then, of course, that’s combined with the absurd 3e stat blocks that take up even more room. What’s a shame is that the encounters are great and that greatness is communicated in just a couple of sentences in each. A skeleton warrior and a ghost are locked in eternal combat, each night the loser is resurrected to do battle once again the following night … these are great encounters!

The encounters are great but the factions are better. Without the factions you’d have some nice and interesting little encounters. With the factions you have a real place with people in it with their own goals and motivations … that are frequently at odds with each other. In to this volatile environment the party arrives. Human Drama Ensues. Errr… and Undead Drama. You’ve got various groups of human survivors holed up in a couple of locations; the remnants of other adventuring parties or expeditions. They just don’t want to die and want to get out of the graveyard. Then you’ve also got several factions of the intelligent undead. These range from undead thieves to lovers triangle to a lich. Each has their own supporters and agents and their own headquarters in the graveyard. They all want out and are all pursuing different methods to make it happen. They generally have at least one grudge against a different group. And then there’s the underground village/town. It has some people in it, miners, as well as a shit ton of underground types, like deep gnomes, drow, and the like. Besides the normal guys just trying to get by there are two factions trying to take over the town and a powerful do-gooder getting in everyones way. Everyones got agents and allies working for them, generally with THEIR own agendas. And it seems like everyone also has a boat load of prisoners each with THEIR own agendas and adventure seeds. I can’t emphasize it enough. I’m a very strong believer that the social element, the goals, motivations and interactions among the people, is what makes a good urban supplement. This place is like one of the best the best town supplements ever written.The party can hack, talk, negotiate, connive, plot, cross, double-cross and, most of all, try to survive in the face of the hordes of the unintelligent undead. I mean, if you can make it through the verbosity.

The maps are nearly throw away. They tend to be small and linear and don’t really provide much in the way of interest. It’s almost like they were an afterthought, or someone felt compelled to add them. It’s not clear to me how much value ANY map would add since the social aspects tend to not need as many detailed maps. Still, better and more interesting maps could have replace all the verbose dreck and allowed for some really interesting exploration elements which would have aded even more excitement to the adventure. It does have a decent number of new monsters (Undead, surprise, surprise, surprise!) and new magic items. These are both something I look for in an adventure. I like new monsters because they keep the party on its toes … they don’t know what to expect from a new creature. The ones in this module are pretty well done, playing on some nice horror tropes. The new magic items are nearly all new wondrous items, which again I prefer. I want magic to be mysterious and fresh. “Sword +1” doesn’t do that but weird mass miscellaneous magic items do have that impact. I approve.

I’m really impressed by the number of adventure seeds and the degree of potential interaction among the creatures in this. I’d be hard pressed to name a supplement which does things better than this, and this isn’t even an supplement but an adventure module! This is a great little place to insert in to a campaign world, if very VERY deadly. It’s going to sound silly, but the only thing I found lacking, besides the verbosity, was the LACK of adventure seeds in the underground village. There are supposed to be some ‘normal’ people down there and some more information on them and their plight, with some seeds, would have been nice. It feels strange to say that in a module with so much in the way of adventure seeds. Perhaps the lack of seeds for the townspeople felt out of place because of the vast number contained in other places? In any event, if you can wade through the “paid by the word” nonsense then you would have a great higher-level supplement. A kind of Sigil for the undead.

This entry was posted in Level 12, Reviews, The Best. Bookmark the permalink.

6 Responses to H1 – The Bonegarden