The God that Crawls 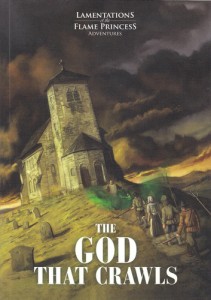 by James Edward Raggi, IV
for Lamentations of the Flame Princess
LotFP/D&D

A murdering cult. A religious order dedicated to protecting sacred history. An ancient catacomb full of danger and reward.

It’s a Raggi adventure and that means there’s a deathtrap involved. Also, like most Raggi adventurers, the players are pushing their luck to grab as much loot as they can before the deathtrap hits. It’s a one-trick pony but its pretty good at its one trick.

There’s this set of catacombs under an obscure church in Dover in 1615ish. Nosy PCs will either go explore it themselves or get drugged/forced by the townspeople in to the pit and catacombs. There they will find The God that Crawls who will chase them around. The party will pick up loot, try and avoid the monster, and try and find a way out.

The God is not actually a god. He’s Saint Augustine, the first bishop of Canterbury. He’s been transformed in to some mindless slime/otyugh/hentai monster. The catacombs were a place where the romans hid treasure and the early church stuffed away embarrassing things. Until, at least, Augustine got stuffed down there. Now the blob wanders around leaving slime trails and enveloping anything it runs across. The priest and his congregation are in on it. They are ideal religious people except for the whole must-keep-the-secret-safe conspiracy thing. Raggi seems to do this sort of thing a lot. People hold strong convictions, are good and moral, except for the awful dark secret that they keep. It does provide a nice moral juxtaposition to encounter during play and illustrates why humans are the ideal humanoid bad-guy type: they are a lot more relatable. It also forces of the issue of morality to come up in game. I generally avoid that if the group likes to “do what their character would do” and push it to the fore-front if they are nice party of murder-hobos. Anyway, Augestine/The Monster will chase the party around in the catacombs with his 30′ movement and 90hp until the party kills him or escapes.

The catacombs have three levels and are full of disconnected areas and multiple stairs between the levels. It has long linear corridors broken up up a hand full of decision points. It’s a pretty good “maze but-not-a-maze” map and works well for a long chase. There are a lot of stairs between the various levels but most are on a kind of linear path. Most of the floors have a slime trail and there are only a few dead-end areas in the map, perfect places to be confronted by The God. The push-your-luck mechanism comes in the form of the loot, and noise in general. The more noise the party makes the higher the chances The God is going to find them. But finding the loot, and interacting with the dungeon, is going to make noise. More loot also means slower movement and a greater chance that The God will envelop the character. The various aspects of the adventure all fit together pretty well and add up more than the sum of the parts, I suspect.

There’s really only two monsters: the villagers and The God. This fits well with Raggi’s philosophy of monsters being Monstrous and everything else being a human. It’s a good schtick and works well in a human-centric campaign. The players probably won’t be taking on the godly villagers and The God is bizarre enough to provide a good contrast and a frightening/looming opponent, always at the edge of the players thoughts as they explore.

The loot sees more Raggi traditions appearing. Most of the loot is coin and goods with a bit of magic consumables thrown in. Potions and scrolls and the like show up a lot in Raggi adventures and serve to illustrate the temporary, and weak, nature of typical magic. The REAL magic items are generally few and far between, are uber-powerful, and come with a host of drawbacks. Weird fantasy at it’s finest. Recall that the catacombs were a dumping ground for things Holy Rome wanted to forget about? Yeah … there’s a lot of stuff down here. In particular there are two rooms that the players _might_ get access to that contain a lot of bizarre and powerful items. Push your luck enough and you get access to host of powerful items. The Spear of Longinus! An oracular toad in a jar. Deadly poisons! Scrolls full of strange powerful rituals. A book that can destroy the universe! Lots of unique items with lots of opportunities for the players to kill themselves. Including some “no-save just die” items.

The most important parts of this adventure are going to the the atmosphere the DM creates and the chase rules. If those are handled well then you shove a decent adventure. It IS too long for what it is; the intro is something like six pages long and flogs the same ideas over and over again.There’s only about 35 encounter areas in a 46-page booklet … Raggi does like to talk. You can get a decent adventure out of this if you’re in the mood for a chase.

3 Responses to The God that Crawls