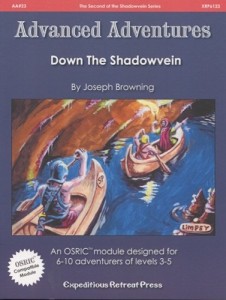 You carefully load your canoes and launch into the fast-moving waters of the underground river named Shadowvein. The Pod-Caverns of the Sinister Shroom behind you, the veracity of the map that is to be your guide into the dark unknown will soon be tested. Hopefully what is written is accurate, but if it is not, your wits, wile, and brawn should serve you well as you journey down the Shadowvein!

This is a Descent in to the Depths of the Earth type underground wilderness adventure, complete with a partial players version of the DMs map that looks like it could have come straight out of D1. Primary, Secondary and tertiary passages, a river running through it, detailed locations along the primary path and a number of blank adventure locations for the DM to expand upon. There are five encounters provided as well as extensive wandering monster tables. The first two encounter areas are with monsters while the second two are with potential allies. The module finishes things up with a small linear funhouse dungeon. There is a wandering monster table for the primary, secondary, and tertiary passages but not for the river proper, which is noted as being very safe. This is probably a mistake. As written this would mean that the party simply encounters the five described areas with perhaps some flavor text by the DM about how they sleep and eat. That’s not really what I think of when I think of a hex crawl. The wandering monsters should be an integral part of an adventure like this, especially when it’s supposed to be set on a major underground trade artery. The river does follow a primary passage at points, so you could fudge a bit over the six-ish days of travel that a boat trip will take. The wandering encounters themselves are not very interesting either. Again, if wanderers are supposed to be a major part of the adventure then they should be spiced up. A 20-entry table with skeletons, zombies, shriekers, grimlocks, etc, is just about the minimum that could be done. Some extra detail for each encounter would have been fabulous, or even just a small random table telling us what the wanderers are doing wandering. The first option could have turned a ho-hum table in to a major interesting bit of content; “Wagon Train to the Fungas Lakes!”

The first encounter area is with a group of goblins in the middle of a power struggle. There are two factions and the party is going to be encouraged to join one of them and wipe out the other. There could be a bit of novelty here in negotiating and visiting with non-hostile goblins, but otherwise this is going to be a straight-up hack down a set of linear corridors while the party wipes out one or both factions. The idea of factions is a good one but the design of the goblin halls, a line, doesn’t leave enough room to reap the rewards. Rather than the goblins being a home base and interacting with them and dealing with whatever petty help or hinderance they could be we instead only have the option of moving straight forward and hacking down great numbers of goblins in small corridors.

The second encounter area is a tad more interesting. A former monstrous humanoid lair is now marked with The Plague Sign … which the party probably knows nothing about and thus blunders in anyway. The eleven or so rooms/caves are all essentially empty except for the main one. That cavern has a VERY nice encounter with a couple of mutated beasties right out of ‘ol HP Lovecraft or LotFP on a good day. A definite scene of horror that must have been inspired by The Thing. Nice evocative scenery in this room to go with the monsters, but thats it. Two 4HD monsters to not an adventure make. These caves are otherwise devoid of coolness.

Encounters three and four are with ‘good’ humanoid bases and are adjacent on the linear river path, being separated by six mile or so of river. Both have fully detailed interior sections which their text goes on and on about the party never being bale to reach/see because so groups are so paranoid. They both have public guests rooms for river travelers but NO ONE gets inside their homes. Then why describe them? And why put them adjacent to each other on the map? Are we meat to slaughter them? There are 300 dwarves in one, a far far cry from the two 4 HD monsters in the previous encounter. One of these areas has a cute statue encounter that the party will probably never get to interact with. Some other visitors or some intrigue in these areas would have livened up these two areas.

The final encounter area is a linear dungeon. There’s some backstory about an inter-dimensional trickster mage, but it’s really just an excuse to put a funhouse dungeon on the map. Hmmm, funhouse may be the wrong word. Grimtooth is closer to it. Ten rooms/encounters, in a line, each with some kind of deadly trap. I don’t have a problem with this in principal, it just that generally in execution it tends to come off poorly. It’s better here than in most I’ve seen. In fact I can’t recall any that do it better, but it’s VERY out of place. The party needs a MUCH different mindset to tackle this area than the ones previous. It’s kind of like sticking Tomb of Horrors as a side corridor in The Steading. It’s out of place and a completely different stye. A few more warnings/bodies may be called for to indicate that a context switch is required. The dungeon finished with a completely barren room except for a treasure chest with a white dragon curled around it. This must be some kind of in-joke from the designer.

A D1 for lower levels is a good summary of this module. Unfortunately it suffers a bit from the thing D1 does. If you can take D1 and turn it in to an evocative fun-filled romp through the underworld then you probably don’t need D1. If you can’t do that then it’s just a rather generic and boring crawl through the underearth. While the Plague rooms have some personality the module is otherwise lacking.

4 Responses to AA#23 – Down the Shadowvein