GC1 – It Lurks Below 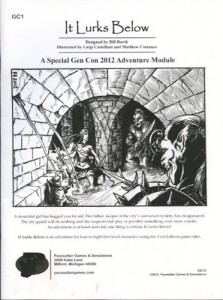 A mournful girl has begged you for aid. Her father, keeper of the city’s vast sewer system, has disappeared. The city guard will do nothing and she suspects foul play or possibly something even more sinister. An adventure is at hand and only one thing is certain, It Lurks Below!

This is a pretty basic adventure in the cities sewers with a few goodies tossed in to elevate it. The players are sent in by the daughter of a worker in order to find her father. The sewers have four parts: the sewers proper, the basement of an old house, a small cave system, and a tomb complex. The maps have a very basic branching layout without loops. The numbers and types of monsters, and lack of wanderers, makes that fact pretty irrelevant though. The house basement map is very small and it’s hard to make out where the doors between the rooms are. I believe the sewers are meant to link up to the caves, basement, and tomb, but the basement is the only area that I can figure out. The other two areas must connect somehow but it’s not clear to me at all how they do.

In a refreshingly change of pace, the sewers are essentially empty. Only some crocodiles are hanging about. They just serve as a passage to connect the caves to the basement to the tomb. There are a couple of rooms, including a locked door, but they just serve to hold the sewer workers tools. The basement is essentially a red herring while the caves provide the first clue to the old mans location … the tombs. These areas are essentially devoid of any interesting encounters. The temple is where things get Old School. Murals to study. Statue arches to pass under and freak out about. Swords that fly off the wall and attack. Alters that bless things. Animating heads and a ghostly oracle. More! I want more! I LOVE this kind of stuff. That’s what D&D is to me. Anyone can put some giant rats in a room make some goblins attack a caravan. That’s just some mechanical dross. It’s the wonder and the whimsey that make D&D special to me and I’m thrilled to see some of that OD&D spirit in this product.

The magic items are a little too mundane for my tastes: +1 maces and +2 shields and the like. I like to see the weird and unusual show up in magical items. Things like all of those effects for artifacts in the 1E DMG, or the Misc magic items in the same supplement. Those sorts of things will keep the party on its toes! The monsters are, for the most part, standard as well although there are a couple of more interesting ones. There’s a skeletal imp and some baby gelatinous cubes that should keep things interesting for the party. There are several multi-hd skeletons in the tombs also, but they suffer the fate of all 1st level undead: turning. The designer takes care of this by gimping the party cleric: no turning in the tombs areas. Gygax did something similar in the Caves of Chaos with those amulets the undead wear. With no limit to the amount of undead you can turn, or the number of attempts, 1 HD skeletons always seem to be throw away monsters. For such a classic monster type its a shame that they can never be used as written. But that’s a bigger problem with D&D, not with the module.

This could fit in well with a long-running city game. The daughter, who isn’t who she claims to be, has a lot of potential as a recurring character and the backstory could provide for a decent amount of adventuring before the characters even hit the sewers, if the DM were so inclined. That’s a nice inclusion.

This is available from DriveThru, as a bundle.