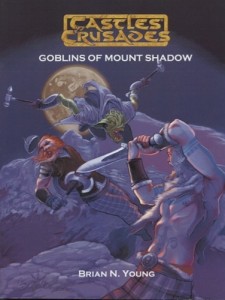 Many long years ago the denizens of Mount Yr Wyddfa crawled beneath the earth; foul minded fey, goblins and others of that ilk; they fled for reasons unknown to any but themselves. The terraced slopes, the valleys, ravines and forested highlands settled in peace, farms spread along the greens, people settled and prospered. But the world unfolds, for ever turning, mirroring the past. It began with nightmares, followed by haunts hounding farmers in their fields, terrorizing them on the roads, chasing them to their sanctuaries. And then the goblins came a-hunting. Not seen in many years now they waylay travelers, despoil them of their belongs or worse, killing them on the road. And to all this the terror only adds, spreading even to hearth and home; young women have begun to disappear, kidnapped from their homes. Rumors speak of a new power, called the Grey King, which settled in the mountain. It is he that stirs up the creatures and has brought the goblins to life. Drawn by a string of random attacks on the locals, vandalism and sightings of eerie beings about the mist shrouded mountain, the characters must band together to discover the cause. To save the local villages from further devastation, the characters will need to hunt down the goblins and find the source of their rise to power.

I’m conflicted on this module. It’s not my style and yet I can recognize that it has something interesting going on.It is a mess. A glorious glorious mess. Can you compose and present some kind of a grand campaign in only 17 pages of text? That’s what this thing tries to do. Oh, it masks itself as a normal adventure but there is no way in hell this thing can be ran in anything that resembles the form in which it’s presented. If instead you take this thing as inspiration and build off of what’s in it then you’d have one hell of a game. But then it would be a setting rather than an adventure. It may resemble more one of those old MERP supplements that presented a land and its environs, some castle plans, and then suggested some adventure ideas. And that’s a distant cousin. I would suggest a reading of the module that treats it like a short story in order to get inspired and then go in and rip out the various salvageable portions and fill in between them to get a GREAT campaign setting and adventure.

The setting is a kind of mythic celtic England with what appears to be a heavy Welsh influence, sometime around the 8th or 9th century would be my guess. There’s no sign of the Romans but instead we get a VERY strong fey flavor. There are large numbers of goblins, hobgoblins, spriggans, hags, kobolds, and others populating the environment. And they are all out to kill the players. Well, ok, not directly. The Grey King has show up and now the fey are flocking to him and he’s waging a murderous war on the human lands. The goblins and hobgoblins are of the fey variety rather than the ‘monster manual’ variety. I don’t usually mention art, but the cover to this book does not set the right tone at all. While it has some nice celts the goblin does not inspire you to think ‘fey.’ Back to the background. The Grey King arrives out of nowhere, sets up shop in a mountain, and start gathering evil fey to him who terrorize the countryside.

The module is organized around three Acts and there are plenty of warnings about such and such needing to survive and how the players can’t kill X or Y. Those are usually danger signs but in this case they can all be safely ignored. The kind of things warned about are extremely unlikely to occur if the module is run as written and if you use this as a campaign inspiration then you’re changing it all anyway. There are VERY brief descriptions of about a half dozen destroyed villages in the area. This are usually just a couple of paragraphs and are FULL of nice descriptive flavor without providing anything in the way of adventure. Eventually the players arrive in a non-destroyed village and listen to a page of monologue from a druid. This tells the players a bit about the Grey King and a magic item they can create to help them see the invisible fey. Cool! Every better, it involves the party questing to a wormwood grove and distilling it in to eyedrops! Pretty cool inclusion of the Green Fairy! Somehow the players stumble on to the environs at he base of the mountain. There are they are harassed by the dark fey that pour out of the mountain every night to terrorize the lands and also meet a couple of NPC’s that the DM can use to spice up the adventure later. They are both on quests to kill he Grey King and it’s pretty clear that neither will succeed, leaving a few opportunities for the DM to include the results of that in the mountain as the party explores.

The mountain lair is very cool and a TOTAL mess. There’s five levels! But only 23 rooms. 🙁 The map way be one of the best bad where ‘many ways between levels’ is involved. But you’re never gonna figure out that out from the crappy maps and the the levels are too small/simple to support any benefits from this type of play. The text mentions six ways in to the complex but I could only find two of them on the map. A careful examination of the text revealed one more, and one more beyond that which was not included in the six mentioned above. Most levels have two or three exits, at least, but where they end up is not noted very well on the actual maps. The text in the module and the maps disagree frequently. One room text mentions four tunnels out to other levels, only three are shown on the actual map, only two of those are labeled and those don’t indicate where they come up on that level. It’s crazy! Other rooms mentions shafts that come in to them or winding stairs that stop at different levels, but that’s all in the module text and not the map and it’s impossible to figure out where the things go. But … if the maps WERE accurate and you had a decent sized levels then you’d have a GREAT fortress complex for the party to explore with many many ways between levels.

There are HORDES of fey creatures in here. Most of them have special powers and most have more than 1HD. There is NO WAY a 1st level party can survive in here, and I doubt even that a fifth level party could survive. The rooms are too close together and there are WAY too many fey around. Any fight is going to pull from adjacent rooms and soon put the entire fortress on alert and the levels just are not designed in such a way that the party could sneak around; they are just too small and cramped. Oh, and the fey have ‘hellhounds’ which sniff out intruders and those are all over the place. The rooms are a strange combination of text which create a very evocative general environment to explore and yet have no interesting things at all. One room notes that the bottom of an undine pool is full of treasure from people they’ve killed. That’s it, no other indication of said treasure might be. Another mentions that there are 2d10 fey guards in the rooms and leaves it up to the DM to figure out which type, from a more general list earlier in the module, and what they have for loot. Somehow the things still manages to create an evocative atmosphere, at least in general. The corridors are full of rubbish, rotting heaps of maggoty garbage, larders of humans aging and so on. The vast majority of rooms have nothing special about them all, just holding some fey to kill and generic text. The single exception if a dark temple where accidentally spilling blood on the alter can curse the party. To top it off the place collapses around/after the party after they kill the Grey King AND the party meats an asshole elf outside who the DM is instructed MUST be kept alive in order for the next adventure in the series to take place. It’s CrAzY!!!!

You could ABSOLUTELY build an entire campaign around just this module, using it for inspiration and pulling out concepts and ideas. It’s a cool little bit of work that is almost certainly unusable as written.

1 Response to Goblins of Mount Shadow