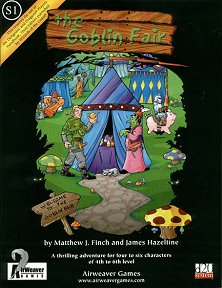 By the dark of the gibbous moon, the fantastical folk of the fey realms gather for one day ay the Goblin Fair: to bargain with merchants of the unique, rare, and the bizarre; to duel with centuries-old enemies by starlight; to dally with faerie maidens by moonlight; to trade and quarrel, feud, parlay, revel and frivol. Ogres and dryads, hags and giants, elves and goblins, centaurs and hedge fey, they gather under the darkling green boughs of the Oldainhan Forest. The wizard Brandon Mistcloak has been trapped by his enemies in his manse Sparrowspell. The key to his rescue is the enchanted book, Taig Tell. He offers mysterious and wonderful rewards for the return of the Book. WIll the party enter the Oldainhan on the trail of the enchanted book to win the wizard’s reward> A trail leads to … The Goblin Fair.
While browsing the 3e/d20 wholesale booth at Origins, looking for 3e Judges Guild conversions, I stuck my hand in to a steaming pile of d20 and out came this little guy. Low and behold, it was authored by Matt Finch! A bit of casual research appears to indicate that it’s the first item published with his name on it, a full four years or so before the OSRIC monsters book and Dungeon Hazards were released. It looks like the publisher, Airweaver, printed just this one supplement and then disappeared, along with everyone else involved in the booklet, except for Finch. There was a lot of crap put out in the d20/3e era … but this is one of the examples of the good ideas leaking through. It’s got some great content surrounded by an iffy adventure.
First, a disclaimer. I like fairies, at least as long as they are being bizarre. They fall in to the same irrational pot as barrows, slimes, molds, and fungi, and old world fairy tales. For whatever reason I really dig the kind of capricious and bizarre behavior that they can bring. Perhaps because they were the last remnant of otherworldly behavior in a game that turned almost all humanoid monsters and demi-humans in to just another example of ‘humans with points ears?’ Don’t know … but you’ve been warned.

This puppy is about 45 pages long. The first eight pages are composed of boring ass introduction and flavor text. The last eight pages are appendices with monster stats, etc. There are fives pages near the end that have ‘the adventure’ … recovering a book. The huge section in the middle, about 35 pages, detail the Goblin Fair. That’s the best part of the book and should be easy to lift in to whatever game you’re running.

The adventure here is just a throw-away in order for the players to experience the fair. There’s a jerk of a wizard trapped in his house and he needs the party to retrieve a book so he can get out. The party goes to the fair to find the ogre mage with the book, only to finally discover he sold it to a cloud giant. Going to the giants castle revels the book was stolen by some wererats. The party kills the rats, gets the book, and goes back to the wizard. Even this portion has a certain charm to it. Sparrows pesters the characters until they talk to the wizard. Polite bugbears invite the characters to dinner. Dobbin the idiot hill giant at the castle gates reads his instructions to the party exactly as written down. The cloud giant is not home but his pretty human wife is, giving the party 30 minutes to get the book from the rats … while she flirts with them. Finally, the mouse hole in the kitchen is 2 feet wide and 3 feet tall! These are all excellent little touches which give the adventure that fairy tale and fey feel that I enjoy so much. They are also surrounded by MOUNTAINS of text. Mountains of read-aloud text. Mountains of DM text. Mountains of text Text TEXT. So much so that it makes it hard to pick out the details needed to run the adventure. While it’s strongly implied that the bugbears, hill giant, and rats all attack the party it never actually SAYS that in the adventure. For example, the hill giant picks up his club and prepares to attack, and so on. So, it’s not a railroad in that sense, which I’m very happy to see coming from Finch.

The Goblin Fair portion makes up the largest section of the book. There are three encounters on the road through the forest to the fair, 27 booths detailed at the fair, and 23 random encounters the party can have. That’s quite a bit; there are village and town supplements which don’t have as many encounters in them. They almost all have that whimsical quality which separates PH elves from the fairies of old. There’s a bridge on the road to the fair with a goblin next to it in bright red pants and yellow boots who claims to own it and charges a fee for using it. If the party gives him a hard time he calls to his buddies/renters, Mort and Tom Crawlmeat, the trolls who live under the bridge. OF COURSE there are trolls under the bridge and OF COURSE the trolls are named Mort and Tom! More perfect bridge troll names I have never heard! In other encounters a hideous spider wants a kiss, and two elves (REAL fucking elves, mind you!) are skeet shooting goblins with a catapult and their bows. I know I bitch a lot about read-aloud text, but the text in this section is priceless, full of a dry wit. One of the encounters at the fair is an Elven Knight on a White Warpig. The entire fair portion is full of this kind of content. Booths for the party to explore and whimsical encounters for the party to interact with, angry chickens, talking stags, hags, drunk ents, peacocks, slavers … it’s all great fun.

This is full of imagination, if not terseness.

1 Response to S1 – The Goblin Fair