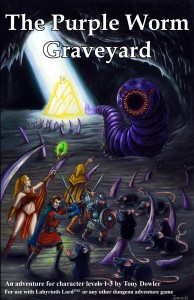 It is said that when the largest and most ancient of purple worms know that the time of their death is near, they make their way through rock, earth, and water to the legendary Purple Worm Graveyard. The graveyard is said to lie somewhere in the barren Rockspyre mountains, but its exact location is unknown. Now and then an adventuring expedition sets out on a hunch or clue seeking the graveyard. Most return empty-handed and dispirited. Some never return. But a few, just enough to keep the legend alive really, come back with whispered tales of subterranean fields littered with a fortune in purple ivory, unguarded and ripe for the take.

This module, while short, is illustrative of many of the aspects that make up a good module. That’s not too much of a surprise since The Dungeon Alphabet is noted as a portion of the inspiration for the adventure. The setting, a place where purple worms go to die, is mythic without being absurd or overly heroic. The motivation is one of the best: GREED. All that purple worm ivory is worth a fortune. 🙂

The dungeon is has only about fifteen encounters while the map is has only one loop. While the map is visually interesting the small size and simplicity of it makes it hard to support the full type of exploratory play that I typically enjoy. I’m sure many people will run this as a short one-off. I do quite a lot of those for my wife’s meet-up and I typically prefer something that the players can’t fully explore in one session as a one-shot. Shadowbrook Manor, or Tegal for example. I like the air of mystery that these larger environments provide when they can’t be fully explored in a single session. It gives that feeling of the unknown and of things going on around the players that I think they really enjoy.

Most of the complex is composed of a ‘temple’ to the worm god, while only a couple deal with the large cavern that serves as the graveyard. The very first encounter, with a magic mouth at a T intersection, immediately brings to mind that illustration in the … Players Handbook? of the party that meets the magic mouth in the hallway. Ah, nostalgia, you are a powerful force! It’s also a great way to start an adventure, as the graffiti in both Stonehell and Rients megadungeons prove out. There are a couple of trap rooms which seem to have come straight out of a less deadly but still Goldberg-esque version of Grimtooth. The rest of the dungeon is full of the strange little things that I equate D&D with: paintings you can crawl through, puddles which are ooze, topless maggot nagas, strange statues, weird pools of water, mushroom gardens, and the ‘Dungeon Moves.’ Evidentially these little 3-effect charts were popularized in the Apocalypse World book. Old time D&D players will recognize them as slightly standardized versions of Tricks. The player interacts with something in the dungeon and then rolls 2d6 plus a stat bonus/penalty. Good rolls get you something positive, low rolls get you some penalty. These little subsystems were a common part of older D&D games and it’s nice to see them make a return.

The graveyard proper is a push your luck contest with the party. The more ivory they gather the more money they’ll get and the greater the chance that a purple worm will show up … a career-ending purple worm in all probability. There are three magic items of interest and all have that extra detail that I enjoy. For example, Beebart’s Dagger gets a little one sentence physical description, and a one sentence flavor text description of its effect: +2 to hit but not damage. The other two magic items are just as good, especially a very large gem that has to be destroyed to be used … tough decision there.  In a move that Gygax could have learned from, there is a brief 1-page listing of all the monster stats on the last page of the adventure. This shows an understanding of what is useful in actual play. It’s a pain to look things up and flipping to the last page/back cover is much simpler. These sorts of GM aids are what show to me that the module was playtested before it showed up in its final form.

This is an interesting little product and well worth picking up, if just to learn from.

1 Response to The Purple Worm Graveyard