FLA01 – The Secrets of the Summoning Chamber 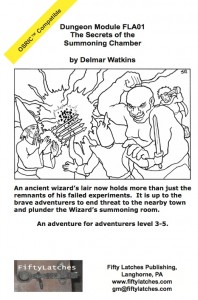 An ancient wizards lair now holds more than just the remnants of failed experiments. It is up to the brave adventurers to end threat to the nearby town and plunder the Wizard’s summoning room.

This is a short little adventure consisting of eight encounters. Yes, encounters. The layout of the adventure emulates the fourth edition style. That’s not necessarily a bad thing, it’s just usually bad in practice. You know, stat blocks, battle maps, terse room descriptions. Those could all be used to create a great old style adventure. It’s just usually surrounded by a bad adventure. And it’s bad here.

There was a wizard and he had a dungeon he used for his experiments. Something went wrong and he died in it. A thousand years pass. Some ghouls take up residence. Then some bugbears move in and wall up the ghouls and the older wizard portion of the dungeon. Then the party shows up.

Unfortunately the encounters are right on top of each other. It seems likely that the designer intended for the encounters to be separate and distinct, while in an older style adventure the monsters would pull from their allies in the next room. For example, encounter one has four bugbears and six dire wolves. Encounter two has five more bugbears behind a door on the encounter one room. Encounter three has six bugbears and two giants rats behind the door on the other side of the encounter one room. And so it goes. At best the encounters have tactical advice for the DM. The rooms themselves offer very little beyond the monsters in them and the tactical elements they use. The magic items are all book related and just listed at the end of the encounter key. The room descriptions are done in a terse format that somehow pads out the adventure.

It’s all very … I don’t know. Dry? I get what the designer is trying to do but somehow the impact is lost, probably because there’s nothing to it other than dry flavor text. This is then further padded out by having a stat block for each creature, including all of their saves and THAC0.

I m at a loss in figuring out how to describe of review this more. Several of the layout ideas are interesting. Certainly noting lighting and sounds is useful, but perhaps would be better if somehow noted on the map instead. The inclusion of elements to be used in combat, a well or a pit to get thrown in to, are certainly welcome as well.