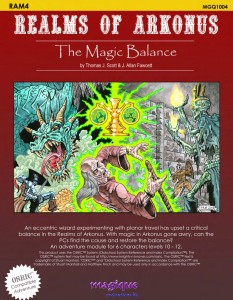 An eccentric wizard experimenting with planar travel has upset a critical balance in the Realms of Arkonus. With magic in Arkonus gone awry, can the PCs find the cause and restore the balance?

This adventure is a railroad from start to finish. I don’t like railroads.

The party is summoned to listen to the DM read a page of text at them. “Blah blah blah Magic is broken. Blah blah blah End of the World. Blah Blah blah.” Somewhere in all of that text is the mission but I probably didn’t hear it because I wandered off to watch some Tv commercial. It doesn’t matter though because one player has his nose in a rulebook, another is in the kitchen getting something to drink to dull the pain while the third is sighing and looking looking at the ceiling wishing he’d stayed home and watched his ceiling paint dry instead of mine. Anyway, … I digress …
The party is sent to a pigsty town to investigate some miracle magic that’s still working. The party is then hassled by the people at the temple where the new healing artifact is; they don’t want to let the party in. This in spite of the party having an official letter/orders from the people in charge and in spite of the whole end of the world thing and in spite of the fact that the party is 10-12 levels higher than almost everyone else in town. Everyone except all of the guards, who of course are all 5th level because that’s what little D&D villages are full of, hordes of 5th level fighters who work for 1cp a day guarding the doors to temples. … I digress …

The party will either stand in line to get in to the temple while being subjected to more flavor text or they will go see some town guard who will flavor text them some more and hassle them and belittle them and then finally let them in or the party will do the right thing and just murder every stinking no-good worthless NPC they lay their eyes on. (Please insert profanity in to that last clause as you see fit. The author of this review is the son of a sailor and thus those looking for an authentic non-wattered down experience should insert profanity quite quite liberally.) If I was playing this adventure I would ABSOLUTELY just start laying to people and killing them. The adventure has barely started and I’m already bored to death with it. And I’m taking shit from people in this little town?!? Oh, you’re too busy to let me in to the temple, even though I’ve got an official latter and I’m saving the world? Well, lets see if your attitude improves after a bit of the ultra-violance, shall we? How about I just rip your head off and drink your brain using whats left of your spinal column as a soda straw? I’m TWELFTH you little POS nobody! Get the F out of my way so I can do whatever I’m supposed to so I can go home. … Whoopsee … I digress …

Inside the temple the party will meet the town sage next to the artifact and he’s just too busy to help the party or even answer questions. … because every town of every size has to have a stuck up absent-minded town sage who’s entire goal in life is to be a shit to the party of high level adventurers on an official quest to save the world, oh, and to drop the one hint on where the next stop on the fing railroad is. Yeah? Too Busy, huh? Well how about I rip out your stinking eyeballs and shove them down your throat? You think you might then have time to fit me in to your very busy schedule of sitting on your ass and taking notes from the front row? So how about I just give up all pretext about caring about what goes on in this adventure and take out my frustrations of being stuck here by just beating the crap out of you in new and interesting ways until you give us the one piece of fing information you were put int he fing module to provide us with? … Sorry, getting carried away …

But Wait! There’s More! That’s right kiddos, there’s another stop on this railroad! The temple closes for the day and everyone is sooooo verrrrrrryyyyyyy tired so the PC’s have to leave … yeah yeah, it doesn’t matter you can kick all our asses and are very important people and have an official letter/mission and are trying to save the world. 6pm, time to leave. This has to happen to all of the villagers will leave the temple so some thieves can pick that EXACT moment to break in and steal the artifact. Not wait till deeper night. Not wait till everyone is out of the temple. Oh no, that wouldn’t work because then the party wouldn’t be forced in to a fight. Instead a group of 5th-11th level flunkies show up to get killed by the party while their 11th level thief boss steals the artifact. He’s an actual fing quote from the adventure “If the PC’s try to stop the thieves: They will not succeed. Darius WILL get the artifact and escape through the roof.” What the fuck man? Why even bother playing the adventure? Oooooo, haven’t had a combat in awhile, better toss something at the party to kill! To make matters worse the townspeople then being to blame the party and start hunting them down to kill them. “The Party must flee or die!” Joy! Hows about we just stay in this little shithole town and kill every single last one of the townspeople, burn down their town and have some fun!?!” DIE MOUTHBREATHERS! … sigh …

The town sage gave you the name of another sage in the swamps to go see. He tells you to go kill a dragon who has a magic item you need. Killing the 18 HD green dragon, which is clearly a 3E conversion and not a 1E dragon, has the party meeting the angry townspeople again (see! should have killed the fuckers when we had a chance!) Quick all you shitty little PC’s, run away in to the swamp! Oh, look, the towns people are getting closer, and now they are falling behind again! Oh, my, look, its the Hierophant Druid! He’s saved us! Golly gee Mr DM, after listening to all that STUPID ASS BORING FLAVOR TEXT you’ve been bombarding us with in the swamp I’m sooooooo thrilled that I get to listen to more flavor text from the Hierophant Druid so he can railroad our asses to the next stop on this stupid fucking adventure. Hey, I’m never killed a Hierophant Druid before ….

Ok, ok, we use the shitty fucking amulet from the dragons lair to go the divine library … why couldn’t Daphne have been there instead? Oh boy! Shitty little vignettes in the Science Fiction, Romance, History, and Future sections! Ha. Ha. Ha. Look, a scene out of Romeo & Juliet is being played out by ghostly figures. Oh! A Star Trek XV book! Finally the party gets to kill a 12ft tall rabbit in order for a 20th level sorcerer to teleport them to the next railroad stop. Kill some monsters, don’t eat the poison fruit, kill a lich, pick up the evil half of the artifact, combine it with the good half, restore the Magic Balance, get the f out of the DMs house and go home and ponder if you really want to put yourself through this again next week.

Wait, hang on … combine the good artifact with the evil one? When did we get the good one back? Oh, that’s right, THE GOOD ARTIFACT IS COMPLETELY FUCKING IGNORED after it get violence s stolen. The party is given absolutely no chance to recover it. Recall that the party is being chased by the townspeople who are out for blood with NO CHANCE of being reasoned with and the next railroad stop is the sage in the swamp, the green dragon, the divine library, etc. Not only a railroad, but a broken one at that.

On to the good. The beginning read aloud portion has a Q&A aspect at the end. There’s a good chance for the DM to get his Horta on by yelling “PAIN!” over and over again. That could be good for a laugh. Also, the green dragon has protected his lair with A LOT of magic mouths. Again, that could be fun also. Otherwise, you’re better off writing erotic version of Star Trek where all of the characters are furries, like Kirk is an Ocelot or something, and putting in a furry version of yourself as the star of the story.

2 Responses to RAM4 – The Magic Balance