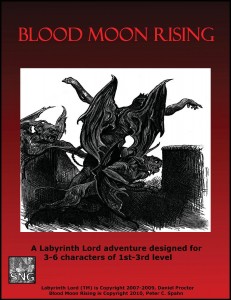 Garanton is a village like any other, except for five days out of the year when it hosts the Feast of St. Garan. During this time, fighters from abroad come to join in the revelry, mingle with other adventurers, and win fame and fortune fighting in the daily games. But all is not well in Garanton this year. Cruel orcs prowl the forest, dark wizards cast webs of treachery and deceit, and bat-winged demons fill the moonlit sky. Does your party have what it takes to ward off this evil before it consumes the entire town?

This is a pretty nice little adventure. The core concept is pretty simple: a local village is holding their yearly religious festival and some monsters attack. That has the potential of being one of the worst adventures ever. But as ever good Ameritrasher knows, it’s the Chrome that turns a boring game in to a great game. And this adventure has a pretty decent amount of chrome, and good chrome at that. With a little tweaking it could be a truly great adventure.

This adventurer is set in and around a village and their local five-day religious/harvest fair. The local church revers a local hero, Garen, even having the town named after him. During the Feast of St. Garen there are people selling things, contests, a host of diversions, groups of strangers from outside the village visiting for the festival, and the highlight: the Honor Games. The winner gets to wear the Mantle of St. Garen, a cloak, for the next year. I’ve seen a lot of these types of adventurers and most of them are not very good. They tend to forget that these are, essentially, town adventurers and town adventurers mean SOCIAL adventurers. The fun is in the people the party meet, the crazy stuff they do, how the townsfolk react to it, and the roleplaying of the party. Oh yeah, and in the middle of all of this is some Maltese Falcon that serves as a pretext for the fun. It seems like it’s hard to not turn this type of adventure in to a railroad. This adventure gets it right, for the most part. It has some nice themes, good NPCs, and a timeline of events to ground the adventure. Well, until the party starts screwing with things. 🙂

The first thing we need is a setting. In this adventure we have the festival. It’s a combination of a harvest fair with a strong religious element and the presentation and parading of the holy relics are a major part of the fair. The adventure description does a pretty good job describing the religious elements of the fair: processions, holy prayers, the basis for the festival and so on. It is pretty light on the ‘harvest’ portion of the fair, choosing instead to concentrate only on those elements that are directly related to the central, religious, themes. I really like the feel of the fair you get from the module but I also think I’m subconsciously filling in a lot of harvest fair elements. In essence, if you consider a typical medieval harvest fair AND THEN add in what’s in the module then I think you get a pretty good feel for the setting. A few more details of the rest of the fair would have been nice to flesh things out for those people without small-town midwest backgrounds, but I still think it does a decent job of setting up nicely evocative place … even if the village is completely ignored, as is the meadow where the fair takes place, as it almost every other element of the fair. 🙂

The next element, the NPC’s, is almost certainly the most important. Town games live or die by the quality of their NPC’s. This one does a pretty good job. We get about 30 different NPS’c of note described to us. This consists of a short paragraph of text that notes their goals, personality, and motivation and a pretty decent stat block of six or so lines. Some of these NPC’s are going to be involved in the core adventure and some are just normal fair goers. We also get a nice contingent of fighters who are taking part in the honor games, as well as a group of actors and a small mercenary company (Yeah! Rival murder hobos!) In addition we also get a nice little table of 20 or so random festival encounters. Wandering odious bards, escaped pigs, the farmers daughter, a lost child and thieving little kids … you get the idea. These are great little additions to flesh out the festival over its five days. They add a lot of local color. The biggest problem here is that while we get a decent number of NPC’s for the party to interact with those NPC’s don’t really interact with each other. In other words, there are really no factions among the NPC’s. This is a real misstep and I’ll speak more to it later.

Finally we have the adventure proper, which takes place primarily through a timeline. If the party is out and about during the event then they may see or hear it. If not they will probably hear about it later from the festival goers as they gossip and react to it. The DM must, of course, modify the events as a reaction to the actions of the party. Essentially what you have here are normal festival events and special events with some crossover between the two. For example, during the contest of strength the party can notice some carvings on the stones. If someone gets knocked off a log during the log spinning then they could see an orc hiding downstream, and so on.

The core of the adventure is that the local legends are based around a misunderstanding. Garan didn’t defeat the evil trio in the ancient past. He was PART of the evil trio. The locals found his tomb and misunderstood the context and the carvings, elevating his to hero status instead of his well-deserved ‘Major Villain’ status. Oops! To add insult to injury the local relics are actually subtly cursed. Very Nice! How do you deal with the local head of the St Garen order, who is a great guy, when you find some evidence that his entire faith is a lie? Hoe does he, and the villagers, react to you?

There are a couple of places nearby for the players to visit as well, which is the closest the party is going to get to a traditional adventure. Garens tomb is nearby, and there’s a local carving on the cliffs of St Garen that could possibly lead to the main bad guys. And what a nice bad guy base it is. It’s simple. It’s terrifying in its implications. It’s perfect to make a low-level party, or even a higher-level party, poop their pants. And that’s GREAT! The party if not forced in to the adventure. The party gets to discover some interesting secrets and has to deal with their consequences. The party gets to look in to the face the evil and a past End of the World event. Finding thousands of petrified demons, with some reanimating, will be a GREAT encounter to watch the PC’s react to.

The adventure could be beefed up in a few ways. Garanton and the meadow are not detailed at all. The harvest festival portion, and indeed many portions of the festival are not detailed. The NPC’s listed do not have relationships with each, to any great extent. This would add a lot to the feel of the NPC’s and the feeling that things are going on around the party. In fact, a wise GM could have some starting relationships/reactions and then another chart that indicates how those reactions change over time, potentially. The Carjacked Seraphim blog had an interesting method of generating these sorts of reactions based on an NPC matrix and a scattegoriies like mechanism. Take a look at the article and reaction matrix it generates. This chart, along with a one page NOC cheat sheet, would go a long way to adding a lot of life to the adventure.

This adventure is available on DriveThru.