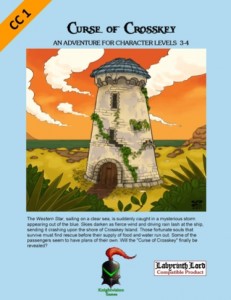 The Western Star, sailing on a clear sea, is suddenly caught in a mysterious storm appearing out of the blue. Skies darken as fierce wind and driving rain lash at the ship, sending it crashing upon the shore of Crosskey Island. Those fortunate souls that survive must find rescue before their supply of food and water run out. Some of the passengers seem to have plans of their own. Will the “Curse of Crosskey” finally be revealed?

One of the, few, interesting things about this adventure is that I’ve seen it before. Played it, actually. It was called Souls for Smuggler’s Shiv and was produced for Pathfinder a year earlier. Both of these adventurers feature a ship that wrecks upon the shore of an island. Both feature a cast of characters stranded on the beach with the party. Both feature fellow passengers running away in to the island jungle. Both feature dwindling supplies of food and water. Both feature an initial attacks by crabs on the beach when the party wakes. Both feature a tower on the island. I played Smuggler’s Shiv, and haven’t finished it yet, so I can’t make any exhaustive comparisons however I have to say that there appear to be significant similarities, especially given the short length of this adventure. Then again there’s only so many adventure ideas. I would go get Smuggler’s Shiv however I’m still in that game.

For some reason the party is on a ship. Hired ship guards, traveling to a job, etc. The ship wrecks in a storm and the party is stranded on a beach with some of the other survivors. The first mate gathers everyone for a meeting and explains that supplies of food and water are low and there are tracks indicating that others have gone in to the jungle from the beach. Just then giant crabs shuffle out of the water and attack! And there are crabmen riding the giant crabs! After taking a leadership position the first mate is then never mentioned. Nor are any of the other NPC’s on the beach. There is a real missed opportunity here. The NPC’s just have a line description. Something like “Sailor: Bob 0 level human.” Giving the NPC’s some more background, some reactions to their fellow castaways or to their plight on the island would have added some interesting roleplaying opportunities. Presumably the party takes a leadership position and goes to find food, water, the other survivors, and a way off the island. There are three places on the island for the party to have encounters. First you’ve got the caves of the crabmen. These are likely to be empty, or mostly so, since the party has already et the occupants. Then there’s also the village of some su-monster like creatures. Finally there’s a tower with the ‘real’ adventure. The village of the su-monsters, crabmen lair, etc, are not really complicated, just a couple of rooms each. The tower has five rooms with some ‘cultists’ in it. Below this is a sea cave with the boss, food, water, and a boat. The wandering monster table only has four entries also, one of which is a pit.

The adventure doesn’t really have too much going for it. The island is sparsely populated with encounters, four, and they are very straight forward ones at that. Find the monster, fight the monster. A pit trap or the like is the most unusual thing the party is likely to encounter. One place where is does tend to succeed is in its treasure. A decent amount of the mundane treasure has some interesting descriptions. A ruby heart gem and the like. The magic treasure is quite nice. Bracers of Phasing, Rings of Thieving, Wand of Sonic Striking and the like. I like nonstandard mundane treasure because of the extra detail is provides to the adventurers. It makes the adventure seem more real. The nonstandard magical treasure likewise keeps the adventurers guessing. It provides a sense of wonder and whimsy. That exciting feeling the very first time your character ever discovered a magical item in a D&D game is invoked … What does it do? How do I find out? Where did it come from? That’s the sort of magical mystery that keeps D&D fun.

In the end this adventure is quite sparse and mundane.