B1 – Journey to Hell 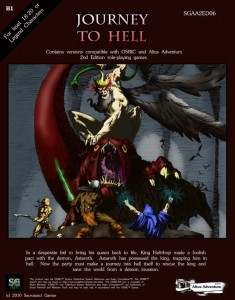 In a desperate bid to bring his queen back to life, King Helthrop made a foolish pact with the demon, Astaroth. Astaroth has possessed the king, trapping him in hell. Now the party must make a journey in to hell itself to rescue the king and save the world from a demon invasion.

Why do people keep making deals with the devil if no one ever succeeds? I mean, someone must, right? Otherwise no one would ever play the game. I’d love to see an adventure about someone who tricks the devil and wins. But that’s not this one. Good King Bob made a deal with the devil and is now in hell, with the party given the task of rescuing him. “Or … hey, I’ve got an idea … let’s just kill the fake king, close the portal, and take over the kingdom! There’s, like, 6 of us and we’re all 20th level! Hell Varsuvius, you get, like what, three wishes a day, right?” The DM must then protest: “that’s not the adventure I’ve prepared, plus, it’s really cool! You get to go through the hell described in Dante’s Inferno!” Has any other book spawned as many supplements? I doubt it, and woe be unto you who sets forth on this adventure. Abandon Hope All Ye Who Play This Module!

Right, off to hell. The party now has a linear journey through hell to get to the bottom of it, find the king, and kill the demon/devil. They will be doing this while experiencing the mind-numbing joys of Dante during which they will encounter many real-world people while never ever encountering any of the christian symbolism or meaning that is central to this extremely boring and no longer relevant important work of literature. Why yes, I did take a class, in Italian, about the Inferno. Why do you ask?

The party is on a railroad. They will encounter something, “defeat it”, and then find a portal to take them to the next level/circle. There are a lot of devils who will attack on sight. There are a lot of Save or Die situations that are presented in a less-than-useful way. Essentially the party, like Dante, are on a guided tour. Meet Charon and get rid of your most beloved possession, or don’t continue the adventure. Watch the wasps of conscious sting the sufferers of self-interest. Enjoy the Forest of Souls and the scenic River Tain. Experience the hospitality of the locals as four pit fiends per party member attack. Meet Euclid, Socrates and Aristotle, along with a host of others whose names you won’t recognize. Screw you Avicenna! I prefer a wide life that’s long also! Ha! P0wn3d! This is then repeated. Meet some underworld figure, visit a few sites, and have an unavoidable fight. What’s interesting are the Save or Die situations. You enter a portal to go to the Plane of Lust. Anyone who has ever lusted must then immediately make a Save or Die or die. This is unavoidable. This earns an ‘Uncool’ rating from this reviewer. The module notes that resurrection and magic don’t work to save people. You have to go physically find someone and then use the magic. At least that’s a sandbox element, although there are no resources provided to help support those actions. There has to be some kind of warning or resources to support the style of play described. Otherwise why not just the adventure asking for six Save or Die rolls, declaring that a meteor fell of your head or some such? It’s too arbitrary.

Ok, you’ve made it through the gates, Limbo, Lust, Gluttany, Greed, Anger and Heresy. You made it through Dis, finding the one magic item in all of hell. It’s a ring with one wish at the bottom of a river of lava that runs through Dis that can be found at only one certain point in the river by someone immune to lava. Or you can just ask Varsuvius to cast Wish, since he gets 3 a day at 20th level. Let’s see, Violence, 10 bolgias of fraud, and then the frozen lake of treachery with Lucifer at the center knawing on some famous people. Whoops, nope, no central figure. Scratch that last reference. There are some more more battles in a palace on this level as well as some logic puzzles before the party gets to fight Astaroth the arch-demon. Killing him wins the adventure and the party gets their reward of 1 limited-wish each from the kings wizards. Or you could just kill everyone and take the kingdom for yourself.

My major problem with the adventure, besides the linear tour guide style, is that it’s boring and arbitrary. It sticks too literally to Inferno and there’s not enough variety in the encounters. You meet someone who immediately attacks or you meet someone who only attacks if you attack them first. Sprinkled throughout are the arbitrary Save or Die situations. It’s Hell; it shouldn’t be boring.

1 Response to B1 – Journey to Hell