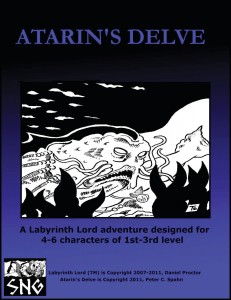 This is a short little Labyrinth Lord adventure module with a byzantine setup straight out of second edition. Let’s follow along: ancient humanoid race lives in caves and then gets turned to stone. Baron Bob comes along and builds a house near the caves and starts collecting artifacts from the cave. He starts a drunken party ‘cult’ for nobles based out of the caves. He dies during a party and his house goes to ruin, but the drunk sex parties continue on.

[BARFLEET!] One of the gallants steals from old jewelry and sells it. An ‘esteemed archaeologist’ buys it, find out where its from, and sets out with a group to do a dig. It’s a major find so he sends back word to obtain authorization to continue the dig. [I’m not making this shit up.] He also contacts the Adventurers Guild to hire some help to protect his dig team. The guild assigns a ‘low risk’ priority to the request and send the party. This background takes place on about two pages and is full of extra detail like “the lake is named after Bobs dead wife” and “Velron the purpose rose cast the flesh to stone spell.”

The hook here is “you get assigned the task by the adventurers guild.” Not the most engaging for the party; essentially it’s just telling them that this is the adventure they will be playing tonight. Perhaps not the best way to get people excited and engaged in a new campaign? The entire late Renaissance culture thing that is implied by artifact collectors, adventurer guilds, and esteemed archeologists is a MAJOR turn off for me. I strongly associate this with the 2E era and I LOATHE it. 7th Sea is a decent game. 7th Sea with murder hobos is NOT a decent game. The genre doesn’t work with the setting. It’s particularly strange to see it in a Labyrinth Lord module. But hey, it’s your game. Maybe you’re in to that stuff … you poor poor fool.

The cave system has fifteen rooms in it. The map is actually pretty decent. There are a couple of different ways in to the caves that the party can discover and it’s full of statues, little water features, doors at the top of stairs, cracks in the earth, ledges and the like. For being such a small map there are at least three loops in it. I find that terrain features add a lot to the game as the party negotiates them and fights in and around them. A nice looping map also allows the party, and monsters to head ’em off at the pass, set up ambushes, and flee to freedom/certain danger. This is all much more interesting than a linear crawl. This is a pretty good example of decent small map that many others could learn from.

Unfortunately the designer does almost nothing with the map. The various features and looping nature are lost because of the nature of the encounters. There are two giant lizards, a crayfish in a pool, and a ghoul in the dungeon. The crayfish doesn’t pursue and only a group of colossal idiots would free the ghoul. So, yeah, I suspect 90% of the time a party will release the ghoul. The lizards are susceptible to missile fire fro the terrain/ledges but the ghoul and crayfish are in dead-end rooms. There are two groups of people hiding in the dungeon that the party can rescue. The drunk noble sex party is hold up in a room blocked by the lizards and the esteemed archeologist is hold up in a room a bit further in. At this point there is a programmed encountered where a few of the humanoids show up and attack. Zzzz….

There’s not really anything going on in this adventure. The caves don’t really have anything meaningful to play in them. We learn that one room is where Baron Bob slipped and cracked his skull, or that another another used to be a ritual bath chamber which previously was used to blah blah blah. There’s no tree with purple fruit on it. No statue that does weird things. No gold piece glued to the floor. For all the mayhem the backstory implies (cult tries to kill archeologists, humanoids kill everyone) it’s a bit of a static environment. No real signs of a massacre or other things would indicate that someone or something is living and/or working in the caves.

There’s no real treasure to speak of. The party was hired for a certain rate and several of the NPC’s will reward the party for getting them out. An old journal might be used for some blackmail, but otherwise there is no coin and no magic items. The wandering table is nice with a variety of mundane creature, monster, and other encounters. Strange shadows, bad footing, and wandering insane cultists. Only one of the new monsters is very interesting; a watery undead who fills your lungs with water. That’s pretty cool. I like things like that since it adds variety and keeps the party guessing about the monsters they encounter. Much better than “Zombie.”

This may be a fine module to kick off a 7th Sea game, or to somehow introduce to an ongoing city game, because of the NPC’s involved. As a stand along adventure though, or a kick off for a ‘standard’ game it’s going to be lacking quite a bit.