A2 – The Lost Treasure of Actzimotal 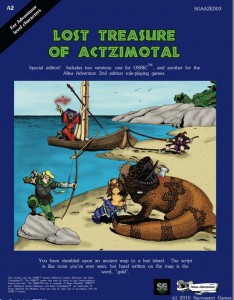 You have stumbled upon an ancient map to a lost island. The script is like non you’ve ever seen, but hand written on the map is the word, “gold”.

The hook here is simple: the party finds a treasure map. I usually like that kind of hook. It’s simple. It appeals to both greed and adventure. It’s something that appeals to the players rather than to whatever BS motivations they give their characters. The hook is clouded by two issues. First, that’s how Isle of Dread starts. Second, you have to make history and intellect checks to decipher the map. “Players: We missed our checks.” “DM: Then I guess yo udon’t get to go on the adventure, do you?” Ok, you can take the map to a historian. For the purposes of not comparing this to my much loathed magical 2E Great Society I’m going to replace that word with “Sage”, which makes me loads happier. No, I am not being a nit-picky jerk. If I had any kind of imagination or time, required to improve this, then I’d just create an adventure myself. I assume you’re in the same position position.

There’s then a four page description of every major port in the region along with how much is costs to buy/charter ships of various types (a Dinghy can not carry livestock) as well as weather and the obligatory Pirate/Mermaid/Kraken encounters at sea. I’m not sure why the port city and kingdom descriptions exist. Maybe because they were in Isle of Dread? It doesn’t really add anything to the adventure. I can understand including some basic sailing/boat rules. While I’m not familiar with Altus Adventum I can imagine that it does not include sea travel and these rules expand on it. Besides, I’m kind of partial to wilderness adventures spelling out for me how many hexes/miles a day the party can travel … and the associated frequency of wandering monster rolls. Maybe that’s a clue that I need a new DM screen. The wandering table is kind of pathetic. Four entires for weather and three for creatures, none of which are particularly interesting. Maybe the Kraken could be given a top-hat, mustache, and monocle? Anyway, I’m looking for interesting, whimsical and fantastic things and those are not present.

Quick, to the Isle of Dre^h^h^hFire! The cannibals, pretending to be friendly, greet the party and invite them to a great feast. If the party are jerks they get drugged, captured and eaten. Hopefully though they agree to solve the problem of the villages food shortage. Drugging the parties food is a classic, just like kidnapping their wife or burning down their village. IE: an overused classic. If you’re going to use it in an adventure it needs punched up a little, or a lot. Wandering around on the island lets the DM roll on the wandering table full of desert creatures and vermin. While boring I am at least happy to see that there are not humanoid monsters on it other than men. I loathe the watering down of monsters by including humanoids willy nilly.

There are two place the party can go: the volcano mountain or follow the map to the lost city. The volcano has a demon in it that is poisoning the villages fishing. The volcano has seven rooms in a linear format with maps that look A LOT like a certain level in … Isle of Dread. There are hints of better things in the volcano. A wand hidden in some charred bones in a lava room. A room covered in scalding water or full of insects. Those of hints of good encounters but they generally fail to live up to what I’d like. The mechanics are clunky (will check or flee the insects, ID magic check to learn the command word. WTF?!) and the descriptions uninspired. The demon is the only creature encounter.

The Lost City has a pyramid with fourteen rooms and a dungeon with about ten more. The layouts are not very interesting. The pyramid level seems to have corridors that twist for no apparent purpose. I’m not quite sure that’s a bad thing, in and of itself, but it doesn’t seem right to me. Spiraling a corridor to get to a room, with nothing in the corridor, just seems like being … obtuse? I don’t need for things to make sense in a module but the map layout just seems like filler, and not in a good way. The upper level has snakes & undead while the lower level has lizardmen and the treasure. WTF?! Yeah, there’s a throw-off explanation of a sea cave exit but man, really? I suspect there was a desire to add variety but this wasn’t the way. Maybe if the lizardmen did something other than immediately attack, or there were signs of the lizardmen caught in traps, fighting the undead, or even the undead wanting to protect their tombs. That could have all worked. Instead its just a feeble attempt to add something other than rats and undead to a tomb crawl. Un. Cool.

The actual encounters sometimes try to make an effort but they generally fall short. For example, there’s a room with some murals on the wall and a bowl. If you don’t drop some of your blood in the bowl then demons from the mural drop down to attack. There’s almost certainly no way for the party to figure this out. A significant opportunity lost. There’s also at least one example of a magical economy being present: priests and visitors were routinely given potions of poison immunity. I loathe any attempt to explain away things, especially in this Rube Goldberg fashion. The toilets have paralyzed black puddings in the bottom to dispose of waste! Ug! No, that specific example isn’t present, but the poison immunity potions are pretty damn close. The only other encounter that stands out is a group of liquid filled bowls that the party can play with. I love that sort of thing; it’s always fun to watch the party struggle with the decisions and effects. The bowls are here but the writing surrounding them is a bit uninspired and bland. Past the undead on the first level and the lizardmen on the second will dump the party in to the treasure chamber. There they have a puzzle to figure out and they get their gold. Sorry, that should be “gold.” Corn pores out of holes. It’s a granary. I suspect that screw-job is not going to be met with politeness from the players. Too many of the encounters, in fact nearly all, are just straight up combats. That’s not interesting and the un-interesting is seldom fun. Having an undead & lizardman faction could have been fun, or more stuff to play with or figure out could have been fun, or perhaps some more environmental tricks & traps?

There are no new monsters with strange and interesting effects. That’s too bad, an island like this could have introduced some weird stuff. I like new monsters with new effects because it seriously freaks the players out. The new demon has no special abilities and the giant gila monster just has a poisonous bite … not too much of interest there. There are a half-dozen or so new magic items. These are not the most evocative in description but they do have non-standard effects. I like that sort of personalization of magic items since I think the players enjoy it more. I just wish more of the magic items in this adventure took advantage of it. The mundane treasure is pretty boring: generic coin & jewels.