A1 – Lair of the Goblin King 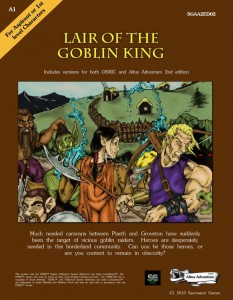 Much needed caravans between Piarth and Groveton have suddenly been the target of vicious goblin raiders. Heroes are desperately needed in this borderland community. Can you be those heroes, or are you content to remain in obscurity?

This thing is a mess. It’s a very basic adventure on a subject that has been done to death. Despite this it does bring a few interesting things to the table that others, many many others, could learn from. I should note that this adventure is actually a double: it has a complete OSRIC adventure and then a complete Altus Adventum adventure right behind it, both being the same just re-statted.

Let’s start with the hook. The players are down and out and need cash and see the local merchants guild advertising for someone to find the headquarters of a group of goblins that are raiding their very important caravans … which has been going on for a year. There are sixteen ways to Sunday to pick this apart, but lets go META instead: it doesn’t inspire the players. Most adventure hooks seemed aimed directly at the characters. Their desire to do good, greed, save the world, etc. I believe the nest hooks are aimed at the players instead. They get the people around the table interested in what’s going on and excited about pursuing whatever is going on. Any player can force himself to say “yeah, that’s tonight adventure, ok, lets go on it” but it is the rare hook tat captures the players imagination and makes THEM want to take their character on the adventure. Goblin caravan raiders, as presented here, don’t make the cut.

There’s a strange plot associated with the adventure. One column describes six of seven things that should happen to the adventurers. They get hired. They look in to an outpost tower. They get some goblin ambushes. They meet another group of mercenaries that have been killed. They find the hideout. They report back only to be tricked by a third group. Someone hires them to deliver a message and in return they will rat out the third group. The guy receiving the message hires the players to go kill the goblins?! All of that is detailed in one column and is then never mentioned again?!?Well, almost never … The outpost tower is detailed, and there’s a couple of sentences about the scene of the SECOND group of slaughtered mercenaries (I think), but that’s it. So, yeah, it’s a complete mess. It’s also a WONDERFUL way to run an adventure. The party is first given a pretty minor goal: find out where the bandit lair is. There are at least two other groups of people with the same mission. The party later find one group slaughtered which is a GREAT bit of build-up for the villains. There is now something tangible that the bandits are evil jerkfaces. This should create a decent amount of tension in the party, much more so than if they just ran in to a group of generic guys named “bandits” in the MM and hacked them. But wait! Treachery is afoot as the third party steals information from our murder-hobos and gains the reward! I LOVE it when the party encounters other adventuring/mercenary bands; I think it gives the world a real living flavor and offers more opportunity for interaction. Then there’s subterfuge and coercion with a hooded figure who wants a message delivered, and then finally the assault on the bandit/goblin lair. This little arc is an excellent build-up to main adventure, raiding the goblin lair, but allows for so much more in depth play. It’s a plot, and I hate plots, but it’s also a very good example of how a DM can run a simple adventure and get his players much more involved with it. Yeah, it could be organized better, but then again so could this review. The fundamental outline of the adventure is solid though … much more so than in most of the modules I see. It could have been presented in a less linear/plot-oriented way but the core concept is solid.

Back to the mess. The outpost tower has a coupe of undead in it and a (secret?) basement with a human sacrifice table on it. Wonder why the guards didn’t notice it before? Then there’s the lair of the goblins. Not really much going on there. It’s full of goblins, a wolf or two, some vermin, and a couple of prisoners. The map is ok, with couple of loops, but not really that interesting. There’s no order of battle so the DM is going to have to do some work on which goblins respond if there’s a general melee, and how they will use those loops to conduct hit & run raids on the party. The various encounter rooms don’t really have much going on beyond the goblins in them. Uh … you have to make a will check near the latrines or get nauseous; that’s pretty much the extent of strange and weird things in the lair. No bottles or levers or fountains or statues or murals to play with. There are a couple of interesting magic items: a spike of warmth and an axe named Elfsplitter, with the rest being just generic magic items, and even those two items not having much personalization beyond what I just typed. The mundane treasure is just as bad … despite raiding caravans most of their wealth is in coin. I like a lot personalization in magical and mundane treasures because I think it adds a lot to how the players react to it, and I’m an unimaginative lout. Sadly, it’s just not here.

It’s pretty clear that english is not the designers native language. This thing is rife with spelling and grammar issues, and not the “I’m lazy ass American” kind that I’m known for. And it doesn’t really matter; you have to have some pretty serious issues for me to take notice and mention it; generally of the kind that the editor or layout guy screwed up. The overall organization is more than a little messy also, which is a more serious issue. There are plot points that seem like they should be expanded upon but are then not, and references to things that should have happened but have not. For, the party finds bodies strung in trees, the victims of the raiders. The boxed text indicates that these are the people that screwed the party over before. But wait … did that happen? And didn’t the introduction indicate that it was the FIRST group that got strung up and the SECOND that screwed the party over? I can forgive a lot in this area if the content is there, such as in the early Judges Guild and TSR stuff. Sadly, this is mostly lacking in excellent content.