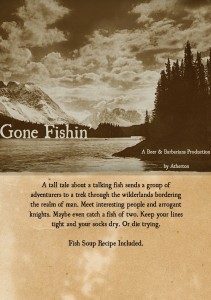 This is a free adventure. I don’t usually review free adventures. My logic is that since you can download them and check them out yourself you don’t need input from someone else before you drop some cash on it. Of course this totally ignores the fact that there’s a lot of crap out there and you’ll spend a long time looking over the multitude of free adventures before you find a decent one. Thus this little experiment. Let’s hope it works out so I don’t have to resort to reviewing 4E stuff when I run out of OSR.

Let’s get this out of the way: This is a wonderful ADVENTURE. <—— See that word over there? You probably think you know what it means. You probably don’t know what it means. I’m not even sure I know what it means, but just like good porn: I know it when I see it. This is an adventure Charlie, one of the few I have ever seen. The players are going to go on a journey, meet lots of very interesting people, and almost certainly kill a few folk. Sounds like a lot of other little-a adventures doesn’t it? Except this one is charming, magical, fun, whimsical, and everything a real D&D ADVENTURE should be.

The hook is wonderfully simple, as all good hooks should be. An old man appears at the royal court and tells the king a story about a giant pike that appeared one day in the river next to a local village. It asks a local bravo what is best in life, the bravo mumbles a response, and the fish eats him in one gulp! The King, desirous of a new trophy, offers a massive reward for the fish. The local nobles and hangers-on flock to the promise of reward and status and, joined by fortune seekers from all walks of life. Joy! Greed! Status! Adventure! All of the characters motivations are covered, even being a hero! And none of that pesky ‘save the world’ garbage that shows up too often in published adventures. There’s something in that hook to appeal to every type of character motivation. Be it by accident or on purpose, it’s a great hook and sets the stage for what’s to follow. A magical little adventure chasing after a giant fish surrounded by idiot nobles. Whimsy and moronic villagers; two of my favorite things!

The ADVENTURE takes the form of a mostly linear wilderness journey. There are several encounter areas that the river is going to pass through which will be augmented by random encounter tables. “Oh no! Linear!” you’re thinking. As if. First, it’s wilderness so it’s possible to skip most of the encounters through creative play, something that is much tougher in a linear dungeon. Second, there is no plot involved. Yeah, there’s a giant fish at the end but that doesn’t mean you have to first have six other encounters to learn his weakness, retrieve the seven sacred rings of Vendusela, etc. There’s a significant difference between the party seeing an old mill and deciding to investigate and the doors of a two-exit dungeon room slamming shut until you solve the bullshit riddle/slay the bullshit monster in the room.

Let’s talk encounters. The encounters here are filled with a wonderful assortment of local color and whimsy and this it what primarily turns a normal adventure in to an ADVENTURE. The local town, once a sleepy place, is overrun with pushy arrogant, mostly incompetent nobles and fortune hunters . This is GREAT. It sets the scene for all sorts of chaos, from price gouging to pushy idiots. I imagine Deadwood, from the Tv series, with a lot more vainly dressed killers in it. There’s an excellent set of random encounter tables for the town: jeering local youths, a stinky dog trailing the players and barking incessantly, idiotic but kind nobles, pickpockets, Alignment Stupid fops, and of course no town adventure is complete without a chamber pot being emptied. These random encounter descriptions are short but full of flavor. Chaos! wonderful wonderful Chaos! But in a good way. 🙂

The fixed encounters are great also. An old Mill. An enchanted forest. A lodge of talking beavers in a shoving match with knights. Arrogant elves, large groups of fairies (Nixies, pixies, brownies, leprechauns.) Ancient shrines with satyrs and water weirds … The adventure has some strong fairy tale qualities to it but never becomes silly. It’s full of encounters the party are going to find memorable and fun. And at the end of the adventure is a giant fish for the party to handle somehow … with a fairy tale ending. Not a DIsney ending and not full on Brothers Grim, but somewhere in between. Hmmm, maybe folk tale is better than fairy tale as a description.

The few magic items could use a little more personalization so they aren’t just “+2 broadsword” and the treasure mostly consists of pearls and perhaps a sack or two of gold. These are the only places the ADVENTURE falls down. Go grab this one and take a look; it’s what a real D&D ADVENTURE should look like.