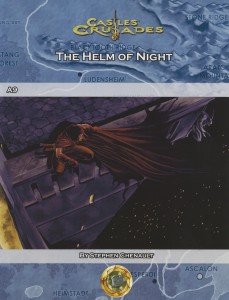 This is the ninth module in a series. It has several suggestions on how to incorporate it in to your campaign if you are not using it as a part of the series. Here’s the background for those new: Mogoth has been defeated by his lieutenant Sauron has set up shop in Angband. Up near Angband is the tower of Sauramon. He used to serve Morgoth but it now allied with Sauron. Recently the players have run in to a guy named Tom Bombadil, who has mentioned that Goldberry has been captured by Sauramon. To get Tom’s help with something else the party has to go to Isengard and free Goldberry. This adventure is about the parties assault on Isengard to free Goldberry. Hmmm, I may have mixed things up a bit there, but you get the idea from the mash-up.

The module describes a keep that is a long-time fortress of evil. It has six levels, each with about seven rooms or keyed encounters. The maps mostly resemble those you’ve seen that detail houses or manors. Generally there a corridor or main room with several doors off of it that lead to others. The map is generally uninteresting, however it does have several interesting vertical features. There is a well shaft that runs through several levels, a stairway which skips a level, stairs on the outside of the keep (I think …), trapdoors, etc, all in addition to ‘normal’ stairs between levels. I like the variety, the level skipping, and so on, and the well is just BEGGING for someone to get thrown in it.

The various encounters how a decent amount of variety for only having 40 or so rooms present. You’ve got the keeps guards running around who are going to try and put on an organized defense if they can. These include a large group of 2HD uber-orcs and some devils in various parts of the tower. You also have some workers/hangers-on present. These range from drywall hangers on the Death Star to some vile 0-level NPC’s. Their presence allows for some interesting roleplaying to take place. I love this kind of stuff in modules since it provides a break from the *HACK* and adds a bit of depth to the gameplay. The DM can drop hints, plot, and perform other interactions that aren’t generally available in an all combat adventure. The last major group is he towers leadership. From the orc captain to the Chamberlain, to the master and his priests, these are done very well. They all have some type of unique personality and some kind of non-generic motivations. My favorite is probably the Chamberlain, a doppleganger who is more than the usual ‘kill party member and replace them’ variety. It’s an excellent encounter and NPC. My only complaint here is that the leadership could have used a bit more lead-in. Some foreshadowing or information about them would heighten the parties tension prior to actually encountering them. This would change the scene from “hmmm, that orc was a little tougher, and look! he had orange hair!” to “Oh shit! It’s Harangur Orange hair! Get him!” There are a few interesting magic items and more than a few book items. Frequent readers can testify for my love of the strange and idiosyncratic. I’m much more interesting in a circlet that allows a cleric to speak with dead then I am “sword, nine lives stealer.” The non-standard items are interesting and one, a barrel, is downright Cool As Hell. There are also several new monsters, with a strong devil bent. Just as with the non-standard magic items, I like non-standard monsters and appreciate seeing them. They always make the party wonder what it can and can’t do, and what it’s vulnerable and invulnerable to. Nothing strikes more fear in to a PC then not knowing if the monster has level drain or not. 🙂

This is a decent fortress of evil. It reminds me a lot of those towers and keeps in the old MERP products, both in mapping style and in the semi-realistic flavor of the core elements. The MERP products tended to be a bit generic, since they covered multiple ages, however this one is flesh out rather well. It needs a little work to build up the villains/leaders a bit more. It could also use a small section on the order of battle. Who responds and when when the alarm is sounded. This should generally be present for all intelligent monsters, especially if “stopping the alarm horn” is mentioned in the text. The editing and map is a little confusing; I had to reread the introductory section several times to get the feel for how the various doors, levels, stairs worked … and I’m still not sure I understand one of the stairs. I’ve noticed these sorts of editing/layout snafu’s from time to time with the Trolls. At $6.99 for a print version it’s hard to complain too much about not being spoon fed.