Charnel Crypt of the Sightless Serpent 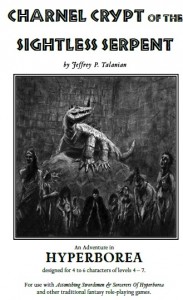 This is a little tomb exploring adventure that have several very nice points to it. There’s about a page and a half of background, the vast majority of which is not needed and adds little to the adventure. This is mostly details around the Hyperborea setting, a brief description of the city and its government, etc. The hook is a bar encounter with someone who has lost his brothers to murder and agrees to sell the party information in return for a little loot to get them buried. The way it’s presented, no party in their right mind would fall for it. That should be ok though, their greed always overcomes visions of future treachery.  There is a nice little three paragraph section that deals with what the players can find out about the tomb and it’s this that adds a lot to the adventure. Two of the three items are not very interesting: you can’t find out anything about the family whose tomb it is and a search of the magicians guild archives shows a little information about a certain necromancer … These are both rather mundane items. The third point though really struck something in me: There are various legends and fairy tales about The Sightless Serpent. This section isn’t long or detailed but it did put Ye Old OSR Rumor Table in a new light for me. That’s what I’m looking for in published material: something that gets me going and jump starts my own imagination.

There’s a short little wilderness jaunt to the tomb complex 10 miles away through a thawed tundra/swamp/wetland. The wandering table is full of animals & vermin and a hazard: tar pits. These are generally the the kind of wandering tables I like, heavy on animals/vermin/hazards and light on humanoid monsters. I think it adds a touch more realism to an adventure without  burdening it with things like ‘exhaustion checks’ or overly detailed logistics planning.  The entrance to the tomb complex is through a giant sinkhole. I think sinkhole entrances are cool. They invoke that rough ‘n tough cave exploration feel. As for the tomb complex, well, it’s a tomb. There are about 18 encounter areas, the first seven or so of which are in a cave system and the rest being in the tomb proper. The map is … well, that of a tomb. Tomb maps tend to be rather linear and this is no exception. It comes along with being a tomb. This map does have some interesting features on it, a loop, a couple of side rooms, and lots of statues and other map features for the party to poke & prod at. As tomb maps go it’s above average but in the end, it’s still pretty linear. This tends to minimize one of the exploration elements in adventuring: complex places. Find out where that offshoot goes, picking a path to explore, ambushing monsters and getting ambushed. A complex looping map can support more interesting play because of this element. There’s not much to the wandering monsters in the tomb; you’re either going to meet centipedes or rates in the caves and nothing in the tombs proper. Zzzzz….

The dungeon encounters proper are not bad at all and more than a few show some real promise. The Sightless Serpent itself is a blind basilisk that cries gemstones. Nice! There are also several other interesting features: an old fishing pond for a lich and then another encounter with his harem. Ewwww! The res of the encounters are vermin, undead, and traps, with a puzzle or two thrown in, all with a degree of atmosphere that enhances but does not dominate. Overall it does a good impression of a realistic view of a tomb in a fantasy setting, which is what its advertised as, I believe. Does it trade realism for fun? Well, that’s going to depend a lot on your group players and their preferences. By my count the tomb portion proper has four combat encounters, three traps, and not much else interesting to interact with. The mundane treasure and magic items are not too interesting being just book items. Well, except for the basilisk tears, that’s kind of a cool origins for the gems. This could be an interesting little one-shot for a high-realism game or a weird fantasy game. It lacks a bit of the fantastic I personally desire, but to each his own.