Fight On #6 – The Darkness Beneath – The Lower Caves 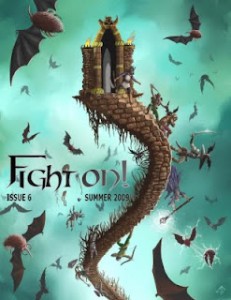 I’m working my way through reviewing the adventures in FIght On! magazine. The magazine proper is a great resource that reminds me a lot of the early days of Dragon or White Dwarf; you know, before they started to suck. Of special note in this issue is a Mutant Future hex crawl around Slimy Lake, and a nice city and borderlands keep write up. If you haven’t checked it out you really should; it’s got great articles to get your imagination going.

As always, I hope you can learn enough about these adventures from my descriptions that you can decide if you want to use/purchase it. I have my own preferences, which I’m not shy in sharing, however the real goal here is describe the adventures enough so you can decide for your self if you’d like them or want to use them.

Hell-Grave of the Tveirbrodur
by Jason Morningstar
2nd level characters?

There seem to have been a proliferation of adventures in barrow mounds in the last couple of issues. This seems to be the last charge in to the valley of barrow mound death. What’s interesting about this one is the very strong historical feel to the barrow, along with the non-standard adventure layout. The adventure could almost be the product of one of those Iron DM contests. “Given these six words, creature an adventure.” The author here used those words as room descriptions/section headers. There is a small map of the barrow that it keyed off the room names, rather than a number or the more uncommon alphabet character. There are also a few section heading prior to the barrow description which fall in to the same vein. It took me a bit to get used to however it works out pretty well, especially for an adventure this short. The set up is interesting, at least to me. (But then again, I have a strong surface interest in barrow mounds, so you milage may vary.) Some kid in a dirt poor village has a treasure he should not have and a story to go with it. The villagers will be displeased if the party announce their plans to loot the mound, leading to a lack of shovels/picks/etc being available if they find out what the party is up to. The mound looks to me like it could have come out of some archeology journal. There is a longship in it, as well as more than a few bodies, all nice and fetel’d up on the map. The treasures here are all bronze armlets and electrum knives and so on, what little of it there is. They seem a whole lot like burial artifacts, … or at least they do to my In Search Of addeled-mind. There are a couple of traps, and a decent amount of undead in the simple tomb. In fact the undead may end up overwhelming the party, being crafty sorts and attacking en masse. The mundane treasures are all very well described however values are missing from many. Given the low loot count of the ones that are described, this stands out a little more than usual. This is a strange sort of adventure that seems to have a very Bronze Age, Runequest, or Harn feel to it. While not what I’m usually looking for, it does seem true to real mounds, which means it should have a great appeal. It’s not a bad adventure, but more a little short and … mundane? for my tastes. Not mundane in a bad way, but more very grounded in the historical.

The Tribe of Rorvash
by Erin Bisson
1st level characters?

Goblin Raiders! Oh No! This little five room minidungeon takes up two pages and feels like filler. Three rooms with goblins in it. A room with their human leader in it, and a treasure room. Oh, and the goblins have trained some giant mantis bugs. The mundane treasures are well described as if the single magic item of note, but that doesn’t really make up for lack of interesting things going on. This may be the least interesting adventure I’ve seen in Fight On. That still makes it better then 70% of all published adventures, despite its length.

Puzzle Dungeon! Do you and your players like puzzles and traps? I tend to prefer them integrated in to my ‘normal’ dungeon levels however my tastes are not universal. This one is also pretty interesting. Essentially what we have is a wizards tomb/lab/workshop that one special feature: Giant stone blocks with rings set in them that are 9’9″ on a side (perfect 10′ hallways are noted as present.) These blocks are used in a variety of ways throughout the dungeon to bypass traps, open doors, kill players, etc. The blocks are the dungeons defining characteristic. Put the block on a pressure plate and a door opens. Turn it the correct way and stuff it in an alcove and a goody appears. Do the wrong thing with a block and something bad happens. The dungeon only has about 11 rooms and the layout is essentially linear. It reminds me a lot of Portal: you come in to an area and need to figure out what’s going on before you can leave. Repeat. There are no real riddles but several clues in the form of riddles or cryptic sayings. This is a plus for me; I can’t stand riddles and puzzle dungeons based on them. There are several interesting misdirections in the dungeon; once the players concentrate on the blocks they may ‘get in the groove’, so to speak, and turn off their normal dungeon paranoia. Those self-imposed blinders are what I mean by misdirection. That’s very neato mosquito. It’s interesting enough and I don’t see any real frustration setting in from the players. It would certainly make a nice sub-level to a dungeon, or a side-trek for a party needing something different. There’s a cute little twist at the end involving a deal with the devil … after all, the wizard Quox WAS an Illusionist.

The Darkness Beneath Level 5 – The Lower Caves
by David Bowman
Level 5 characters?

Holy Crap! The community megadungeon ‘The Darkness Beneath’ has turned out some very good levels thus far, with a single exception. I was expecting and looking forward to another pretty good dungeon level in this issue. I was wrong. Holy Crap! This thing is awesome! Even by the VERY high standards of Fight On and The Darkness Beneath, this level is crazy bad ass! The map has 70 or so keyed areas in it and has a pretty complex design: lots of loops, lots of ways in to and out of the level, lots of terrain features. It’s divided up in to five or areas each of which has a separate feel to it. The core is a kind of travelers inn in an old fey home. These two elements, the inn and the former fey, map up the bulk of what’s going on in this level. There are 40 or so named creatures, from goblins and humans to trolls and demihumans, that are scattered through the inn and the environments. Everyone has their own motivations and goals, which makes for fabulous play, in my experience. The party can interact with people, learn rumors, go on side quests, get information about deeper levels, explore the cave areas, and so on. There’s a richness and history to a lot of the areas; details like former bands of murder hobos to be found in various states of death through the level, and terrain features with a history behind them. These elements help bring the level alive. Many of the areas have so much going on that they feel like those ‘wilderness encounter’ pieces that sometimes show up in magazine and supplements. You know, two or three pages of someone you can meet in the wilderness? Those are EVERYWHERE on this level, and condensed in to a paragraph or two for the most part. This level is so rich and has so much going on that it feels a lot like a fully formed portion of one of those drow cities, like in Vault, if they were fully fleshed out and detailed. The entries are a little longer than I generally prefer, but that’s more than made up for by the rich content they provide. Not endless mind-numbing room descriptions but details about the occupants or the special things going on in that room. There’s a host of new magic items that are well detailed and unique which also contribute to the original feel of the level. There are also several pages of new monster entires that will keep the party on their toes. This is a fabulous effort and ranks right up there with the best products ever made: Thracia, Dark Tower, and so on. A really stellar example of what a good dungeon level can be.