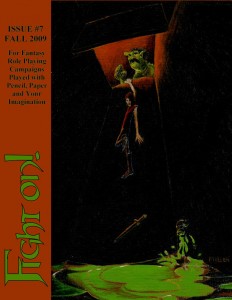 Legend of the Dullahan
by Matthew Riedel

Boo!
Did I scare you? Awww, schucks. This little 12 location wilderness setting revolves around a Headless Horseman and aims to be super spooky. It’s got the traditional elements but the DM is the one who’s going to make or break the atmosphere. There’s a covered bridge for the horseman to ride across, along with some trolls under it. [Every bridge should have a troll under it. EVERY one.] There are murky moats and roads of bone dust, dead forests, howling wolves, and a creepy old dude in a hut. Stakes with heads on them and scarecrow corpses. That’s a lot of spooky elements. What’s missing here is some advice on running a spooky adventure. Horror is hard to run. Otherwise this is a straight-forward little exploration with a strong halloween theme. Nothing too remarkable about the monsters, the treasure, or anything else. Probably good for a halloween game break, or maybe some actual horror if you can swing it.
The Temple of the Sea Demon
by Gabor Lux
Level 3 characters

This is a nifty little adventure with maybe 20 encounters in it. The background is simple enough: there are places in the city that you can’t see normally. Only out of the corners of your eye or while dreaming can you find your way to the abandoned and lonely plaza which holds the Temple of the Sea Demon. I can’t help it; I’m a romantic at heart. Most of the temple is empty of priests and the like however almost every room has some bizarre little thing. Silvery mists that appear from bowls and then strange people, weird magical pools, strange magic items, fun things to steal (rare bath salts!) and so much more! I love the strangeness of the temple and its effects. There’s so much to see and do and get in to trouble with! This sort of interactivity is missing from a great many adventures these days; I wish more modern authors would include those exploration elements. I wish the adventure as a little longer, and it perhaps needs a few more adversaries scattered throughout. Hmmm, maybe the current priests could be beefed up so the party would have to sneak about more? Anyway, with only 9 2HD priests plus the high priest, things are likely to degenerate in to a pitched battle. That’s going to be hard to players to get out of, given the special environment of the temple. This is a great little adventure that could be popped in to Arduin, Tekumel, or some decently sized city in your own campaign. I just wish it were longer.
Song of Tranquility
by Jerry Stratton
Level 5 characters?

This is a quiet little weird fantasy adventure set in the frozen north. While seeking shelter the party is drawn towards a large grave marker, which further leads them to a ship frozen in a mountain. Seeking shelter the party encounters bizarre objects (but not too much!) and bones. There are really only two encounters: some 5HD monster zombies and an 8HD gibbering mouther-like creature. As such the adventure is quiet and slow, building over a couple of days to the attack by the mouther monster. It reminds me a lot of a mashup between The Thing and perhaps an expanded hex-crawl encounter. The strange objects in the ship will seem a bit familiar to party but strangely out of place. This would be a great addition to a weird fantasy game, or even a modern horror game. (As most weird fantasy is.)
Beware the Lord of Eyes
by Allan Grohe Jr.
Level 5 characters?

This is a small 9 encounter cave complex inhabited by a beholder. The given set up is that he’s new to this area of the underdark, having just arrived in the last couple of months. The characters are hired by some drow as expendable ambassadors to get the buy to lay off raiding their houses caravans. That’s all given in one small paragraph and is more of an example of how to use the caves than a real hook. The cave system map is pretty nice: lots of terraces and ledges, a sinkhole and river and so on. Sadly the adventure doesn’t really take advantage of any of it. A great opportunity was missed in making this a little more interesting. With gargoyles and their beholder master there could have been a lot of fun with very unusual obstacles. The rooms themselves don’t really have a whole lot going on. The sinkhole is nice primarily because of the rot grubs, but the other rooms don’t really have much interesting going on. The mundane treasures are very well described with interesting flair however this stands in marked contrast to the magical treasure: +2 dagger, +1 mace, and so on. This could server as an interesting diplomatic mission to a MUCH more powerful opponent, but the actual exploration is a bit of a let down. Oh, I don’t usually comment on art, but this adventure is FULL of beholder art work. It’s on every page and features a variety of beholder styles. Very Nice!
The Search for Lord Chürisan
by Krista Donnelly
A Tékumel adventure for 4th() level characters

The party has the honor of being the fourth expedition through a nexus point. Their goal, as well as the two previous groups, as to discover the fate of the first expedition and it’s noble leader, which has completely disappeared. The second expedition was massacred by parties unknown and the third impaled when they returned for not discovering the fate of the first. Joy! Thus is a wilderness adventure in Tékumel. The party gets to travel by tube car, poke around in a dusty desert, travel through a nexus point to an ice world, get ambushed by a party of enemy soldiers, and explore several other nexus points on the ice world; albeit briefly if they are smart. There are a couple of horrible predators in the barren areas, about 30 enemy soldiers in the ice world, and some uber-sorcerers that will kill the party outright if they don’t flee from their magics. The party needs to keep their mission in mind: discover what’s going on and report back. There’s almost three pages of background data on the adventure, mostly the history of the various expeditions and the political landscape. This is a bit much for me, but it does provide the required background needed for running what is, in essence, a mystery adventure. This one is less bizarre than most Tekumel adventures.
The Fane of Salicia
by Lee Barber
Level 6 characters

Last months level was one of the best dungeon levels I’ve ever seen in my life. Lee Barber gets to follow that act. Unlike many of the other levels The Fane has a major gimmick that will make of break the adventure: is your party full of idiots? Will they fall for a group of nubile young concubines in a temple deep under the earth? Or will they wade in till the temple floor flows red with blood? The Fane offers both options. Either the party gets charmed and does missions for The Fane on other levels or there’s a large pitched battle ear the entrance with most of The Fanes guardians. With only 16 rooms The Fane is a tad small compared to other levels. The map has a decent number of secret doors on it but its not really large enough to sustain true explorative play. Even if there’s a pitched battle the party is sure to run in to many other occupants of this level, from troll ‘artists’ to undead to, uh … weird things. There’s a might fine selection of unique items to find and a decent number of new creatures to keep the party busy guessing. Each room has something interesting going on in it, if only the lengthy text were edited down a bit. This feels more like a sub-level than a true megadungeon level.