Fight On #2 – The Darkness Beneath Level 1: The Upper Caves 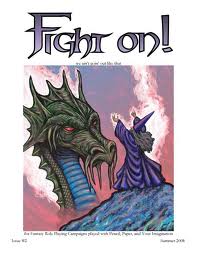 I’m working through reviewing the adventures in Fight On! magazine. If you’re looking for a review of the magazine proper then you’ll need to look elsewhere. Or just go buy it; it’s pretty good in exactly the same way that the VERY early Dragon magazine was.

The Tower of Birds

Lux writes some great content and this is no exception. He(?) seems to come up with some interesting ideas as a matter of routine. This time its the Tower of Birds: a great tower who’s exterior is worn away and which is impossible to tell if it’s man made, such is the erosion. I imagine it as a great termite mound in the desert, off the road, calling to thirsty travelers. Indeed, it’s set near a wetland which has all sorts of avians. I imagine the place to be hollow with a stairway running around the interior wall. There are 14 or so encounter areas scattered about the height of the tower, with only the last containing creatures: the Birdmen! Otherwise the place is open to exploration. There’s a hidden treasure room with a nice trap or two and a few other treasures hidden about in otherwise ’empty’ rooms. There are no wandering monsters and the map is rather linear: it being primarily a staircase from bottom to top with a few rooms hanging off of it. The magic items and treasure are all full of flavor with decent descriptions (a blue metal ring with wavy red script. Protection +1) and more than a few have something special about them, good of bad. The hobby has seen a lot of small adventurers publish. Most suck and are boring as hell. This one is small and really has only one encounter however still manages to be interesting. I wish more designers had the imagination of Gabor Lux. The tower and the examples of the items and traps in it are well worth cribbing for a more involved  adventure.

The Darkness Beneath Level 1: The Upper Caves

by Hackman, Calithena and David Bowman

This adventure details the 24 rooms of the first level of a megadungeon. There is a nice cross-section of “The Darkness Beneath” megadungeon that has about about 15 different sections, if the surface sections are not counted. This section, “The Upper Caves” is probably the first a party would encounter, given the layout, but there are other entrances from the surface to parts shown in the cross-section. There’s a nice wandering monster table that could be from the early days of gaming: trogs, crabmen, halflings, kids on a dare, creeping mold, etc. Very nice. There’s also a couple of other tables to randomly determine what you find on various corpses and some random trappings for the caves, like fog or gusts of air. The map is essentially divided up in to four section, with ‘The Great Hallway’ running down the middle. The sections have some distinctive feels, from caves to halls to crumbling halls, as well as some interesting features such as crumbling rooms, passageways that cross over others, internal stairs, and so on. The items & encounters in this are a wonderful mix that strongly invoke the early days of gaming. There’s a murderous bad of halflings led by a leprechaun, and a group of hapless goblins led by bugbears. The creatures tend to be doing something, even if only playing the “fun cut game” or training their rats to play in the fountains. The items are nonstandard things like cursed armor that shouts “Here I am!” when hidden monsters are about, or a gem that shoots blasts of fire … until you roll badly. This is adventure is a great example of what I consider Old School, and is exactly what I am looking for, even though it does have humanoids.

The Red Gem of High Cartography

How often do you see an Empire of the Petal Throne scenario come along, eh? “Never” was my answer before looking at this. Is riding the railroad ok if the scenery is pretty? This scenario is heavy on flavor but lacks the specific charm I’m generally looking for. When looking at The Spider Gods Bride and Song of the Beast Gods I thought I knew the flavor they were shooting for. Having seen this adventure I now have a MUCH better idea of how … frameworky? those products were. They were but pale platonic shadows of more interesting written work … like this. The adventure has five parts however that’s being a bit generous. The first part is an initiation ceremony for the party. It is detailed and bizarre the way only Petal Throne can be. There’s a short play, a brief ceremony for the party, and then some human sacrifices. The takes us a page and half to two pages and is brilliantly strange and almost a total soliloquy by the DM. The second part is a journey through the underworld under the city-state in question. This has ten or so set encounters for the party and includes such favorites as “NPC Bob recognizes the monsters and calls for fire”, etc. The encounters are all good ones, and vary quite a bit, but most party members hate NPCs for good reasons and this adventure illustrates why. The NPC is higher level, knows more, and sets he schedule and path. The party is just along to roll some dice. What follows from that is a brief 29 room dungeon temple where the party steals the titular jewel and then a 10 or 11 room dungeon on the path back home. Finally, there’s a very brief section, sure to wildly entertaining, about escaping from the orgiastic rites in the temple the party stumbles in to as they exit. The magic items and treasures encountered are wonderful and the encounter rooms vary between extravagantly empty rooms and bizarre encounters like animated frescoes. The maps aren’t really complex enough for their to be an exploratory element, but the hook is that the party are hired as fellow thieves, so what little complexity there is is probably enough.